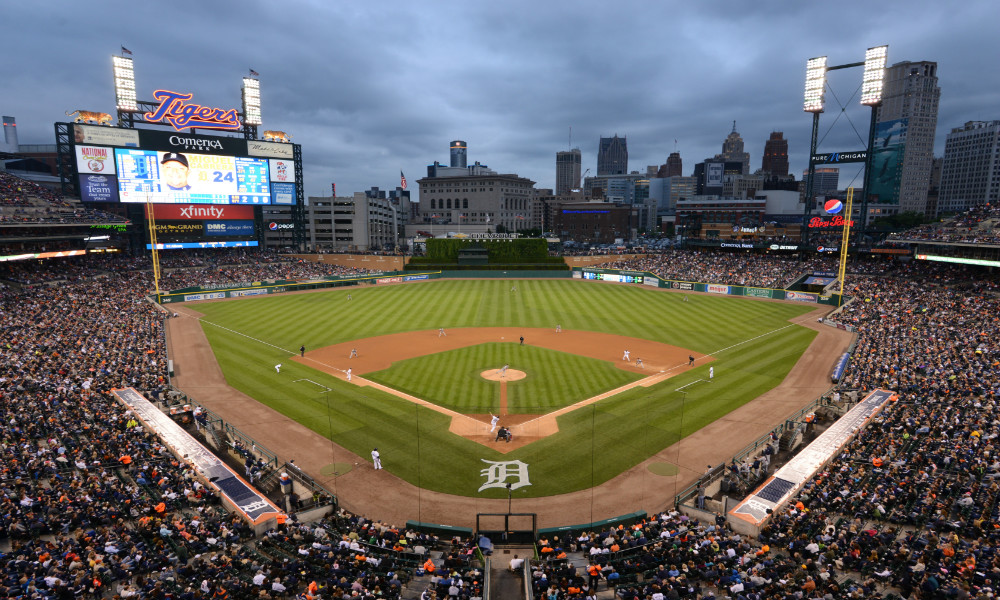 The New York Yankees begin their first road series of the 2016 MLB season this afternoon in Detroit against the Tigers. Ironically enough, I too have ventured to Detroit, not to play the Tigers myself, but to observe and report on the team’s home. I took a baseball road trip through the Midwest, visiting numerous MLB stadiums along the way, and wrote about it in a collection of essays on Kindle called “Baseball in the Midwest.”

Detroit was the second stop on our trip. It was, at the same time, exactly what I expected of Detroit while not being at all what I expected of baseball in Detroit. As my beloved Yankees prepare for the journey, here is a passage of my experience from my Kindle collection.

Detroit, Michigan is only a prance down the road from Ann Arbor and the University of Michigan’s Big House. While the college town has a devoted and ever-loyal fan base, the Detroit Tigers have a similar brand of rooters but for different reasons.

Ann Arbor is green and spacious and inviting; Detroit is none of these things. Through perhaps some fault of the residents, Detroit, MI is unpleasant and unclean. A shoddy, worn down area of town surrounds the Tigers’ home, Comerica Park.

What the Tigers organization has attempted to do is make fans forget about the outside by sprucing up the inside…to mixed results. A beautiful entrance with numerous tiger statues spans the front gate. Inside, Comerica is as much amusement park as it is ballpark. There are games of chance and games of skill, as well as rides and, of course, cotton candy. But the stadium doesn’t seem capable of escaping its home. The bathrooms were dirty, the seats were dirty, the stadium was generally grimy and uninviting, just like the city that encapsulates it.

This doesn’t seem to bother the fan base; they may not even be aware of it. When our game had concluded, a pair of older gentlemen asked about our trip and where Comerica Park ranked in terms of the best stadiums. We said it made the top 10 only because we had yet to see 10 places.

As play progressed, Trout, Pujols and Cabrera became afterthoughts. All the hitters did insofar as their exploits were non-existent. Matt Shoemaker, the Angels’ pitcher, was on his way to doing something even rarer than throwing a no-hitter. That would be facing the minimum amount of batters possible in a game without throwing a perfect game. A min-game, as it’s not yet known but should be, has only happened 34 times since 1957 according to Baseball-Reference.com.

Anyone can throw a no-hitter. In fact, it’s been done by some very, very bad pitchers over the years. But they are forever immortalized. So why no love for throwers of a min-game? Allowing base-runners and then retiring them on the base paths before they are able to score or an inning is completed seems extra special.

Alas, on this night, it was not meant to be. Angels manager Mike Scioscia removed Shoemaker after 7.1 innings, with a min-game still intact. Even his own manager couldn’t care less about the achievement. LA reliever Joe Smith, with the prospects of a combined min-game hanging in the balance, promptly gave up a triple to the first batter he faced and the min-game was eventually thwarted.

For the full Detroit essay, as well as many others from cities around Major League Baseball, check out Baseball in the Midwest on Amazon.