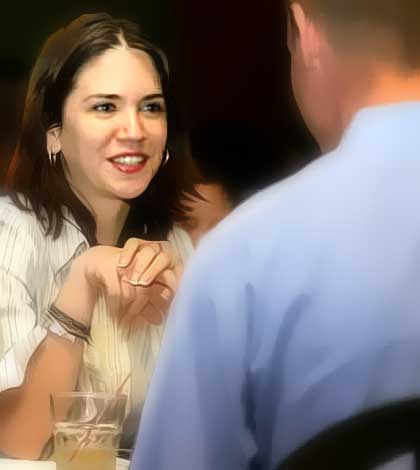 I hate dating. There. I’ve said it. Dating is only a flirtatious “first sniff” of what may later be mounted. And like the unwilling sled dog harnessed in line, my soul squirms at the thought of having to “put my best foot forward” to gain a man’s sniff of approval.

There is a great myth that has been perpetuated: that “dating” is fun, and as a woman I should like it. I’m convinced there’s a hidden conspiracy behind the dating myth. One crafted to guarantee an ongoing form of economic revenue as women are forced to buy new clothes and makeup, and men are lured into expensive restaurants to prove their merit.

The need to dress up, straighten my hair and wonder if “I’m okay” feels like poison running through my veins. It reminds me of my summers at the Minnesota State Fair: local farmers parading their cows, pigs and horses in hopes of winning a blue ribbon.

Criticized by friends over never having “officially” dated, I decided to put this argument to rest. I said “yes” to any agreeable man who asked me out. I had 98 dates in 9 months.

First, let me define the word “dating.” I am using the traditional meaning— that of “courtship.” I didn’t sleep with 98 men. No less than three times a week I would put on the same outfit (perhaps a little half-hearted on my part) and meet a new man for dinner. I sat. I listened. I ate.

And here’s what I learned: men parade their toys. While we, as women, are the cows, pigs and horses parading for our blue ribbon— men too, parade in their own fashion. They name-drop their friendships with celebrities and clarify their positions of power and influence. They mention exotic trips and fancy cars. They dangle their toys in front our eyes in the hopes that we will bite the bait.

Oddly, they are not the bait. Their possessions are the bait. And, in the midst of their parade of toys, they wait to see if our eyes dilate with interest as they too, hope they will be worthy of our approval.

I have consistently found my own way to partnership without all this nonsense. I don’t have “game.” But I do know who I am. The men who have shared my life have moved easily from our first meeting to a natural form of on-going connection.

Dating in today’s world is more akin to an extreme sport. High-heeled women flaunt the sex card as they savagely stampede each other for a man’s attention. Running with the bulls in Pamplona has never been on my bucket list.