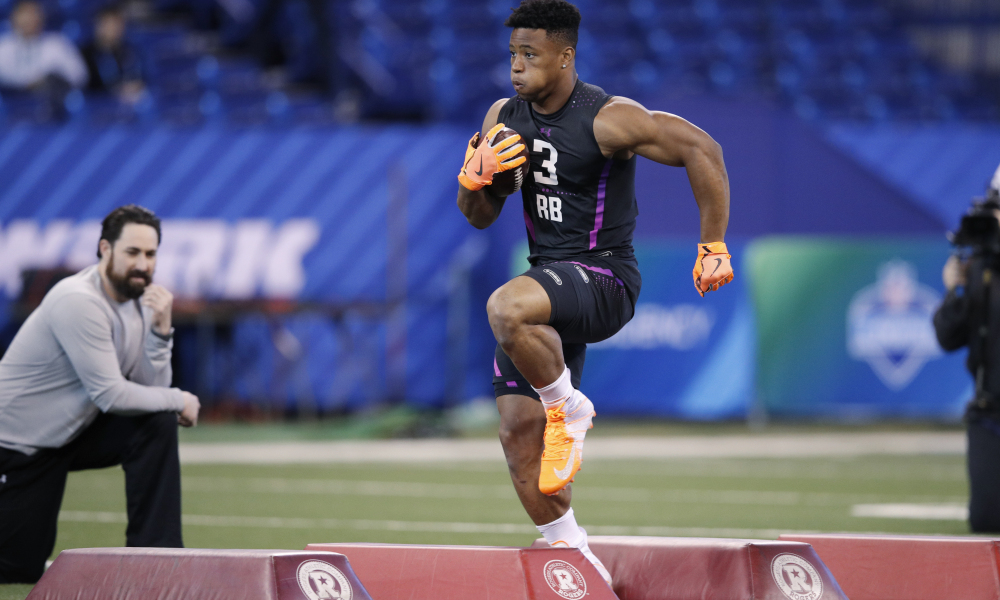 Many NFL analysts believe the 2018 NFL Draft hinges on who the New York Giants select with the second overall pick. That decision depends on which direction the franchise wants to head.

An almost overwhelming amount of buzz has surrounded the New York Giants franchise. This pertains to who it will select as the second overall player in the 2018 NFL Draft. With first and third picks likely headed to quarterback prospects, the Giants hold many of the cards. They could also trade the pick to a different QB-hungry franchise, though that feels unlikely. New York is positioned almost perfectly with this second selection.

Running through the plausible options at two is almost a who’s-who of positional needs for Big Blue.

Those are the eight players in consideration for a top-two pick from New York. Obviously, whoever comes off the board at one will not be available; the remaining seven players will be there for the Giants to choose. And their course of action depends on whether the team is going for the playoffs in 2018 or whether it wants to kick-start a rebuild.

Rosen is probably the most NFL-ready quarterback in the draft. He isn’t as mobile as his peers but has the skills to compete. Scouts are most concerned with his personality than anything he does wrong on the football field. That, and injury concerns are holding him back from being the consensus top pick.

Darnold is a meld of Rosen and Mayfield in that he has the passing tools but also some athleticism mixed in. Unlike Mayfield, though, he is prone to many mistakes and bad throws. Mayfield is an ideal NFL quarterback if not for his size and demeanor. Like Rosen, teams worry about his off-field antics. Unlike Rosen, they also worry about his height holding him back.

With Allen, his height (and arm strength) is arguably his best asset. He is terribly inaccurate and not ready at all to play at the NFL level, but teams become enamored with potential. Allen has what can only be deemed elite potential…for whatever that’s worth.

Outside of quarterback, this class is filled with superior talents. Barkley is a generational running back. A team must decide, though, whether that position is worth a top two pick, regardless of how good the player is. The same goes for Nelson. He is a steamrolling offensive lineman, but he plays inside at guard. It is a position historically easier to fill than tackle.

Chubb and Fitzpatrick are classic top-of-the-draft talents at top-of-the-draft positions. A decision on them becomes about whether positional value pushes them ahead of possibly superior football players like Barkley or Nelson. Though it isn’t necessarily the case with these specific players, it’s like choosing between a solid starter at a scarce position versus a Pro Bowl player at a position routinely easy to fill with someone solid. What is more valuable?

For New York, the decision likely comes down to simply taking the best player that fits its course of action. With such dire needs at running back and the entire offensive line, it would be hard to downgrade either Barkley or Nelson enough to push them out of consideration for the pick. So then, what are the New York Giants doing, playing for 2018 or looking ahead to the next version of the franchise?

There may also be another factor at play for New York. According to SportsBettingDime.com‘s Sascha Paruk, the future of the franchise depends on whether or not it trades wide receiver Odell Beckham Jr. He goes on to say that “if [the Giants] keep OBJ, they need to surround Eli Manning with a better infrastructure, and dynamic, multi-dimensional running back Saquon Barkley fits the bill perfectly. A stud O-lineman like Quenton Nelson would also be a smart, safe pick. If they deal OBJ, they may be better off going into rebuild mode and finding Manning’s successor.”

That stands to reason. If the team moves on from OBJ prior to his free agency, it is almost punting this season and what remains of Manning’s career. There it makes the most sense to find the future franchise passer. This is especially true if new leadership doesn’t believe in the long-term outlook of Davis Webb. If, however, New York has simply been posturing and wants to hang onto Beckham, it makes more sense to back Manning and compete this coming season. In that case, the Giants should turn to a linchpin player like Barkely, Nelson, or Chubb. That second option feels like the most realistic and best play. New York then keeps its best player, gives it another go with arguably the best QB in the franchise’s history, adds a potential Pro Bowl player elsewhere on the roster, and, as a bonus, gives Webb extra time to grow.

More NYG: The Threat of Trading Odell Beckham is Enough