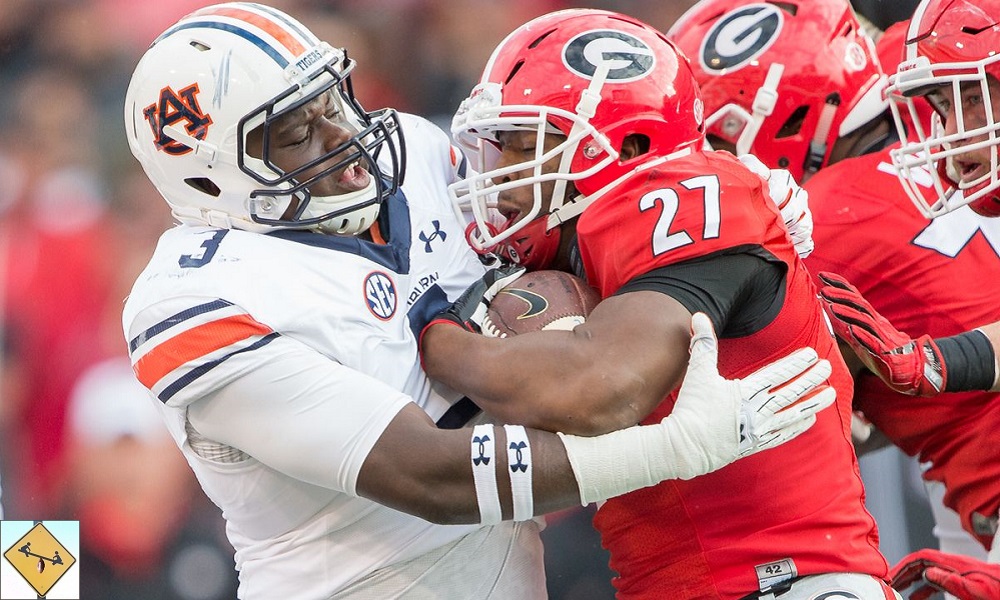 Light your hair on fire, because eight teams have legitimate claim to our four 2018 College Football Playoff spots. Good losses are once again real.

Prior to Thanksgiving weekend, we had a clear picture of the 2018 College Football Playoff field. It was Alabama, the ACC champion, Oklahoma, and Wisconsin. Now, that picture is muddled beyond belief.

The Crimson Tide lost its first game of the year, pushing Alabama out of the SEC championship game entirely and opening the door for Auburn and Georgia to punch playoff tickets. We could even see two SEC teams make it, including the Tide. Miami lost its first game as well, meaning the ACC champion is no longer a slam dunk playoff contestant. If Clemson wins the conference, it is in, but Miami currently feels like the weakest one-loss team of any of the main contenders. Notre Dame lost, dropping it completely out of the picture. That leaves us with eight teams for four slots.

Since only one of those eight is a Big 12 member (OU), we could have more fireworks if the Sooners lose to TCU for the Big 12 title. Then, the conference will be shutout of the playoff yet again. That is the scenario Alabama is hoping for. The Tide secretly have a pretty weak resume to this point, with no way of improving it. It probably needs Auburn to win the SEC, defeating Georgia for the second time. A Clemson loss to Miami would open up another slot for debate. The only spots that are secure right now are those for the SEC champion, whomever it is, and the Big Ten champion, whomever that is.

This is as muddled as the playoff field has ever been. Just last week, I was ready to say that four teams was the perfect playoff size for this season, and now that is beyond wrong. An eight-team playoff would be perfect for 2017 since so many of these teams at the top have just one loss or have lost to each other. What takes precedence when only four spots exist? Conference champions should be rewarded, but what if their overall resume is weaker or they have a head-to-head loss? And what to do with Central Florida? I suppose the answer is to do nothing with the Knights. They are a perfect 11-0 with a rematch against Memphis looming, who they beat 40-13 earlier in the season.

Ironically, a September game against Georgia Tech was cancelled because of the hurricane, and that could have been UCF’s highest quality win of the season. Who knows how much a win there would have bumped it, but it wouldn’t have been zero. A 13-0 UCF squad would have at least had an argument for making the top eight. Now, it falls way short of the playoff regardless.

The final four of the 2018 College Football Playoff can be a super easy decision, or a hair on fire mess of epic proportions. One SEC team will make it. If Auburn beats Georgia for the second time this season, they are in the playoff. No question and no debate. If Georgia beats Auburn, then the two teams will have split. Georgia’s only loss will be against Auburn, same as Alabama, yet the Bulldogs did not play the Crimson Tide. Auburn already has two losses, but one is to Clemson. Does Alabama get in over Georgia, with both teams only loss being to Auburn?

One Big 10 team will make the playoff as well. Wisconsin is in, if they beat Ohio State to remain undefeated. If OSU wins, do they get in with two losses, one of which is to Oklahoma? Speaking of the Sooners, are we sure they are definitely making the playoff with a win over TCU? Oklahoma has a bad loss on its resume, but Alabama and Georgia both have good losses. Wisconsin would also have a good loss, if it falls to Ohio State. Clemson also has a bad loss, so a win over Miami means they’re definitely in the playoff… unless Wisconsin, Oklahoma, and Auburn all win. Then its Alabama or Clemson and the Crimson Tide’s loss is better.

While its nice to award a 2018 College Football Playoff spot to each deserving conference, it’s also stupid. If two or three of the best teams all play in the SEC, then all three should make the playoff. This is certainly an argument for eight playoff teams, especially this season. Yet I prefer the hair on fire mess that we are in. Alabama is a more worthy playoff team than Oklahoma in my opinion. Clemson is less worthy than Auburn. Miami is out, even if they beat Clemson. Here’s a scenario that can easily happen, ordered by current AP Top 25, with updated win/loss records by outcome.

Record matters, meaning that Wisconsin, Alabama, Miami, and someone else make the playoff. I suppose its Auburn because they win in this scenario, but I don’t feel good about it. Penn State is currently 10-2, as are the USC Trojans. TCU would be 11-2 with a win over Oklahoma. Then there’s undefeated UCF. Light my hair on fire. This mess is intense.