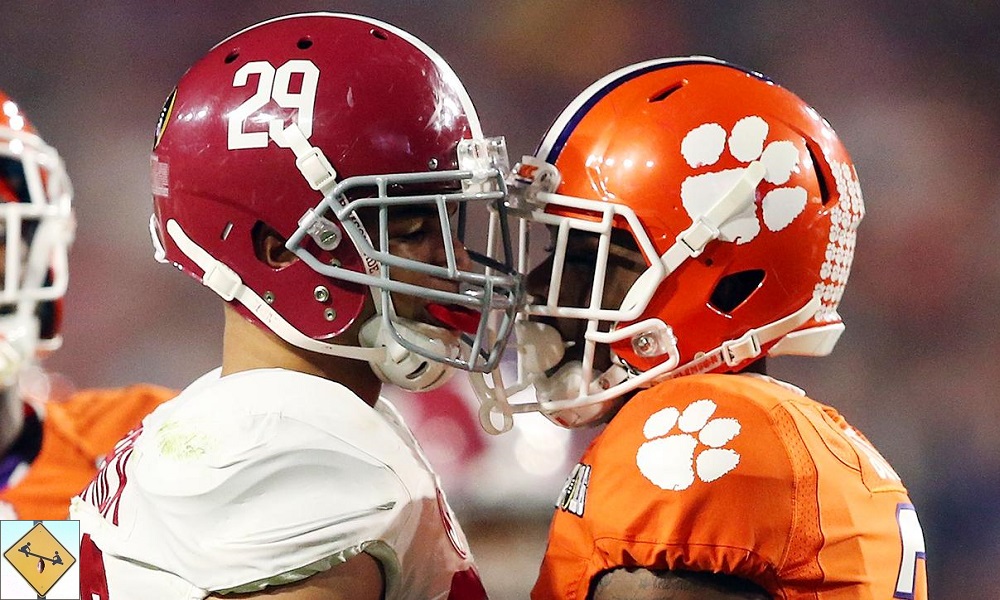 A threematch in the 2018 College Football Playoff is inevitable. Alabama versus Clemson will once again be our championship game. Are two dynasties a good thing?

The players change, but the names stay the same. The 2017 college football season is shaping up to deliver us a third straight national championship game between the Alabama Crimson Tide and the Clemson Tigers; the rubber match if you will. Can anything stop the inevitable conclusion to the 2018 College Football Playoff?

This past weekend was a big one for unexpected upsets. Previous No. 3 Oklahoma lost at home to Iowa State. Then No. 7 Michigan fell to hapless Michigan State, also at home. Though a number of undefeated teams still remain, only two matter: No. 1 Alabama and No. 2 Clemson.

In professional sports, fans strive for dynasties to either root for or against. Having a team of superstars compete year after year drives interest. Look at the Golden State Warriors or New England Patriots as evidence of this. But collegiate athletics are different because all the players are constantly different. The only constants in a college dynasty are the institution name and the head coach.

To me, that makes this less interesting. The Crimson Tide and Tigers aren’t better than the rest of the country because of a system that has grown around peerless talent. They are better because they bring in the better recruits each season. That’s obviously the whole idea, but it feels less fun when watching this battle of dynastic programs.

Clemson essentially has an entirely new set of skill players on offense this year. Non-Tigers fans are learning about this team as it trends toward the title game. Virginia Tech just played the Tigers and got walloped. Clemson controlled both sides of the ball with ease, but I had little idea who I was watching on the winning side other than Dabo Swinney and the defensive bangers up front.

Am I grasping at straws to make this threematch less than it ought to be? It’s fun to watch the most talented teams battle for supremacy. But it’s also fun to watch players we are familiar with.

Of course, this is really just a Clemson “problem.” We know all the Alabama guys who made waves last season. And perhaps Penn State, with its multiple Heisman Trophy candidates, will reach the College Football Playoff and give us some more name recognition. It seems weird that Clemson has reached blue-blood status so quickly as to retool a national championship team in one offseason and be right back there the next. Only Alabama is supposed to do that. Now we have two Alabamas. That hardly seems fun.

There are no straws for you to grasp at, despite your best efforts. This is what college sports are. College football players can leave for the NFL without playing four years at their school. College basketball players can leave after one season. This phenomenon is nothing new, so either you enjoy rooting for team colors and coaches, or you do not. The idea of “knowing” the best players on the best teams is a shot in the dark from season to season.

Unless a former Heisman candidate returns to school, there are very few ‘name’ players to begin each new year of college football. Therefore, it’s not until about the mid-way point where we can identify the best of the best on the best teams. But I’m thrilled that we have another dynasty besides Alabama. Two villains are always better than one. Fans must pick sides and the 2018 College Football Playoff will be great because of it!

The irony of this debate is that the playoff system was developed to give more teams a shot at the championship. Yet since its inception, we now have two powerhouse teams dominating the new system. Ohio State has snuck in and out of the conversation, but Alabama and Clemson are the top dogs. Penn State is interesting this season, as is Virginia Tech. If the Hokies only loss is to second ranked Clemson, then their resume may be the best of all the one-loss teams. Regardless, I like dual dynasties and the chance at a title game rubber match. I like knowing that the championship is not a foregone conclusion in favor of the Crimson Tide, barring a major upset. We officially do not know who will win.

Last season’s title game was pretty freaking sweet. It’s a credit to both programs and their coaches that both teams are once again dominating the sport. I want to see Clemson and Alabama face off in the final game of the 2018 College Football Playoff. The only thing I want to see more is an upset in the semi-final games. Penn State making the National Championship would be some kind of insane redemption story, after the sanctions they faced from the scandal a few years back. As a casual fan of college football, these dynasties make the sport easier to follow and more fun to watch. Bring on a threematch!

More Sports: Who SHOULD We WANT To Win World Series?