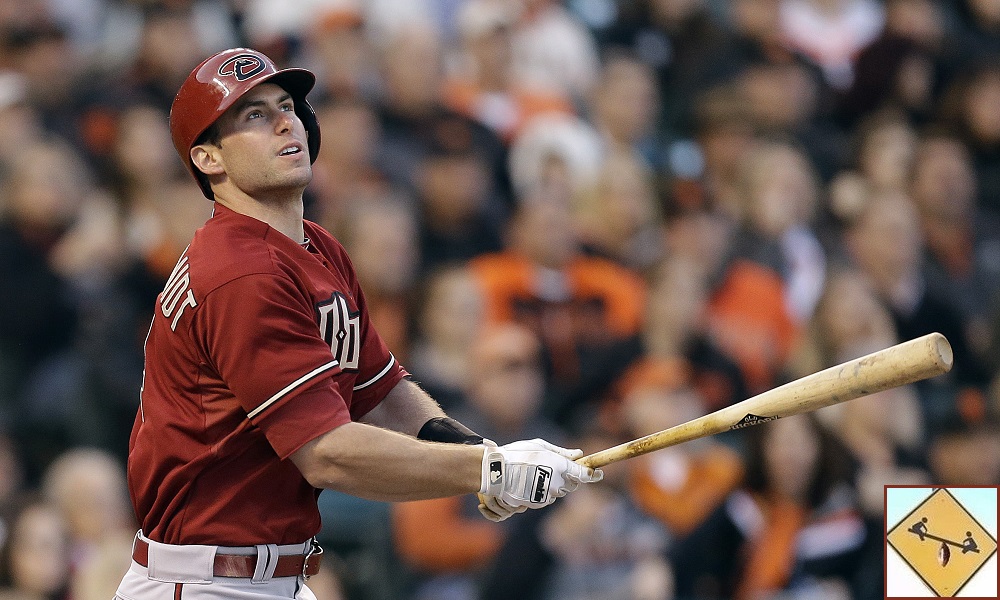 Three players sit atop 2016 Fantasy Baseball draft boards, but only one is the unanimous top pick. Harper, Trout and Goldschmidt are your keys to victory, but Goldy is number one.

It is fantasy baseball season. With that comes one question. You have the first pick in the draft. Between Paul Goldschmidt, Bryce Harper and Mike Trout, who ya got?

I will alleviate some of this tightness in your stomach by exclaiming that there is no wrong answer. This is a pretty spectacular top three we have for the 2016 MLB season.

Trout has been the guy for the past couple seasons, but that may have changed. He hasn’t been running much and has seen his steals decline each of the past three seasons. If he is a 10-15 steals guy, suddenly he is not a 5×5 fantasy stud. Everything else is still there though. He has a career slash line of .304/.397/.559, which is just insanity. I do have some pause about the roster built around him. The Angels could have a pretty poor offense overall this year, which may cut into his runs and RBI opportunities.

ALSO ON BUZZCHOMP: What REALLY Happened to Michigan State During March Madness?

With Harper, he too will not run much, or at least he hasn’t run much in years past. He only stole eight total bases the past two years combined after stealing double digits in each of his first two seasons. Though Harper doesn’t have a speed edge on Trout, the argument goes that he may be better in the other areas now. He certainly was in 2015. But then there exists that lingering injury worry with Harper. He played in 118 games two seasons ago and just 100 games one season ago before playing a full year last year. Is the threat of an injury still a worry with him moving forward? Career slash line for reference: .289/.384/.517.

Obviously anyone can get hurt, but with Goldschmidt there is not that feel of an injury concern even though he missed time in 2014. And even though he plays first base, Goldschmidt is ironically as good of a bet for steals of any of these guys. I think he may be my answer if I had first selection in a fantasy baseball snake draft. It would be hard to pass on Trout or Harper, but I see no downside to taking Goldy. Requisite career slash line: .299/.395/.535. All three of these guys are out of this world. I would hate to have fourth pick.

Fantasy Baseball is certainly top-heavy in terms of truly dominant offensive stars, but I’d say picking outside of the top five is really the death-blow to your season. I am personally fortunate to have Mike Trout on my team once again this season, via a keeper selection. Although you’d think this makes me bias, after rooting for Trout for several seasons, I’m beginning to see an ominous pattern to his fantasy performance.

Trout’s steals have declined steadily, but I believe this is a consequence of him playing on progressively worse ballclubs. Why steal a base if your teammates are not going to bat you in for a run? Why risk injury via a steal and a slide if your team is not seriously in contention for the postseason? Mike Trout is looking out for his longevity and perhaps thinking about his next stop in the Major Leagues. The Los Angeles Angels have not done enough to elevate his game. Trout is due for another great year, but because he plays the outfield and is among a lineup that will not be boosting him up very high, he is not the number one fantasy baseball pick.

Without giving the question any thought, my answer would have been Bryce Harper as the number one pick. Case closed. He’s on the best team of all three players, putting up nearly identical numbers with far greater upside. Yet the key to winning fantasy baseball is a balanced roster, and because the outfield position has far greater options than first base, Harper’s value is slightly lower than Goldschmidt’s. Add in the below statistics and Goldy must be your number one overall pick. Unfortunately he’s on the Diamondbacks, so if you’d rather pick a player whose team is more fun to watch, then go with Harper.

Playing at a position of higher value, on a worse baseball team, Goldschmidt put up more hits, more RBIs and more stolen bases than both Harper and Trout. He fell short in home runs, but was otherwise a far more dominant player last season. He’s the number one fantasy baseball pick for 2016.