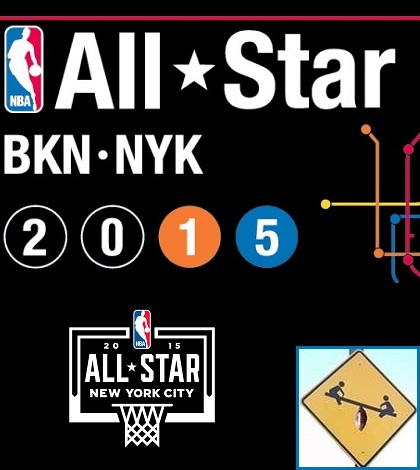 The 2015 NBA All-Star game sports the best East/West matchup in years. Fan bias aside, the big men are back and they bring excitement. NBA sports debate.

The starters for the 2015 NBA All-Star game were announced near the end of last week.

Quick blind resume test (stats as of starters announcement), who would you rather have on your All-Star team?

You need more information? Player A ranks 118 out of 120 qualified players in shooting percentage while taking the most shots per game of anyone in the league.

Player B is one of the frontrunners to win the NBA MVP.

FYI, Player A (Kobe Bryant) is starting and Player B (James Harden) is not, if that information wasn’t apparent by my phrasing. We know fans have always been, and will continue to always be, incredibly stupid. Yet it is still amazing anytime it happens.

Obviously Player B, Mr. James Harden, is a better all-star selection based on the numbers. But lets dig a bit deeper into the current 2015 NBA All-Star game starting lineups. Kobe over Harden is egregious, but there is so much to love about the actual starting lineups this year.

Let’s first clear the air. Kobe Bryant will likely skip the game because of injury. Same goes for Carmelo Anthony. This opens up a starting spot on both teams and I’d like to nominate some replacements. It has to be James Harden for the Western Conference. He leads the league in scoring average and is in the top five for steals as well.

I’m open to a different Hawk on the roster, but everything else feels kinda perfect. Marc Gasol (west) will face down his brother Pau Gasol (east) in the 2015 NBA All-star game. How awesome is that? Then you have Blake Griffin, Anthony Davis, and Stephen Curry all on the same team (west). Again, I’m getting excited.

If an all-star game isn’t going to be competitive, it has to be exciting. The Western Conference starting five is a thrill ride waiting to happen. Who are they facing down you ask? Oh, just LeBron James, John Wall, and Kyle Lowry. This is Lowry’s chance to really make a splash beyond the NBA inner circle. And its a perfect matchup for what the west brings to the table.

This All-Star game feels big. Big men are back. Call me crazy, but including the likely replacements, is this the best All-Star matchup in recent memory?


Photo credit to wizofawes.com and www.nydailynews.com