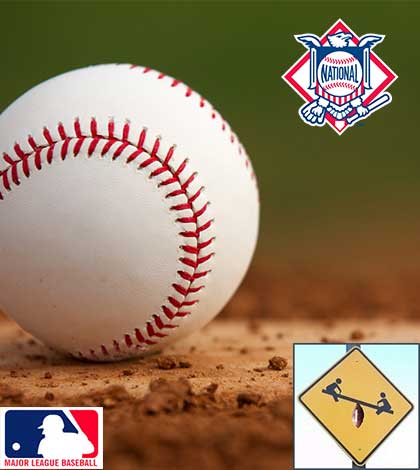 The National League is once again top heavy and full of bottom feeders in 2015. Yet the wildcards are complete unknowns as many clubs vie for legitimacy. Our 2015 MLB Predictions continue with the National League and an attempt to avoid chalk.

Let’s move on to the National League, a league with a couple of heavy-hitters coming off of high-90s win seasons.

Here are the five playoff teams in the NL in 2015:

The NL is almost a mirror opposite of the AL. The senior circuit has three distinct favorites in my mind in the three division winners. I would be surprised if any other team won a division title this year in the NL. However, after the top trio, depth is scarce unlike in its AL counterpart which is almost filled entirely with middle depth.

You could talk me into as many as seven different teams nabbing a wildcard in this league, but I don’t find any of them particularly intriguing.

Miami, home of the best outfield in baseball, has starting pitching questions and needs a huge year from new starter Mat Latos. The same goes for Pittsburgh and Gerrit Cole. Chicago and San Diego are preseason darlings with a lot of question marks. The defending champs are sure to take a major step back this year. I have major problems with all the main wildcard contenders.

In the end, I went a bit off the board because of this.

I like the Cincinnati Reds and Colorado Rockies to slip in as the final playoff teams. The Reds will be in contention if their good players just get it together and actually play like they can. This means huge bounce-back seasons are in store for Joey Votto and Jay Bruce. Combined with the development of Mesoraco, Frazier and Billy Hamilton, this offense has all the tools. They did trade away starting pitching depth, but that just allowed Tony Cingrani to find a spot in the rotation. Meanwhile, Colorado has loads of talent both in terms of hitters and exceptional young pitchers. It just needs its big bats to play a full year. I’m going out on a limb and say it happens in 2015.

With all the buzz surrounding other NL clubs, especially the aforementioned Cubs and Padres, these wildcard teams will be able to slide under the hot light of public scrutiny for a long while as well, which can’t hurt their chances.

Three NL clubs topped 90 wins last season and all were division winners. I hate picking chalk, but I see little reason for that to change by much. Unlike you, I’m not nearly as optimistic about a few other ball clubs.

The Nationals and Dodgers dominated the NL so well last season, its near impossible to see that changing much in 2015. Considering both squads play in relatively weak divisions, both Washington and LA will easily top 90 wins with division titles once again.

The defending champions were neck and neck with the Dodgers for the NL West last year and should give them a solid fight once again. But they won’t be as dominant. That matters little in the end, as they win another wildcard berth. All the Giants need to do is make the postseason. The rest is unpredictable, as last year showed with their run to another title.

As for the National League Central, it was the strongest and most competitive division in 2014. All five clubs should do well this year, so I see your optimism for Cincinnati and even Chicago. But I like the Pirates. They have been improving season after season, nearly topping St. Louis last year for the division title. They do just that in 2015, as Milwaukee falls farther back to the pack and the Cardinals hang on for the final NL wildcard berth.

I see little turnover in the playoff teams this season, but as for playoff predictions… Let’s just say it won’t be a repeat performance by San Francisco or Kansas City. To be continued.