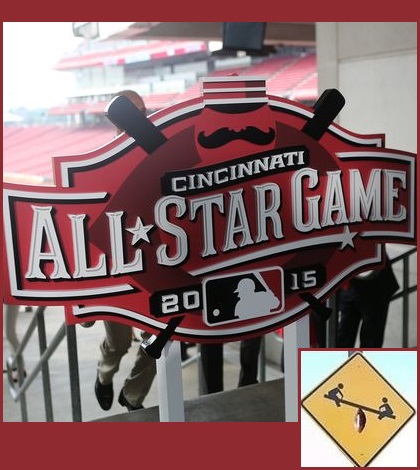 Every wacky storyline died as rosters for the 2015 MLB All-Star game were announced. All that’s left are predictions! Can the National League get off the schneid, or will the American League win its third straight? MLB debate.

The starters and reserves for the 2015 MLB All-Star game were announced this week, and the whole thing felt a bit anticlimactic to me.

We had pending storylines galore that all seemed to fall by the wayside.

Would the Royals dominate the AL starting lineup? No, not really. They got a bunch of guys in but they were all pretty deserving. Would Alex Rodriguez overshadow the event? He didn’t even get in and it wasn’t that big of a deal. Sure, he’s had a good season, but it isn’t markedly better than the other guys who were taken over him. The word “snub” doesn’t apply here.

Overall, there were a ton of relievers selected, which is always a point of contention because starters are so much more deserving. There was a utility Red Sox player added because any Red Sox player had to be added, and no one really deserved that honor. Clay Buchholz has been really good recently but not the whole year; Mookie Betts has been solid but not spectacular.

Did anything surprise you here? As the years progress, it seems the All-Star lineup announcements take on a grander feel but end up making less news.

If you’re feeling like me, then which side do you like to win the actual game and secure home-field advantage for their league in the World Series? (Yes, that statement continues to sound silly each and every season.)

That statement is absurd, yet the fact that home-field advantage hinges on the All-star game’s outcome does make the stakes higher. It also makes the game ridiculous, but as you already noted, the 2015 line-ups are anticlimactic, the build-up rather silly, so having a zany game just puts a bow on the entire spectacle.

We agree that there’s little to discuss in terms of the All-Star lineups, outside of one legitimate snub. Clayton Kershaw of the Los Angeles Dodgers should be an NL All-Star. It’s a shame he got stuck onto the “Final Vote” and likely won’t make the cut. He may not have the wins of prior seasons, but he leads the National League in strikeouts. Kershaw got overlooked because his teammate Zack Greinke has been statistically better and is in fact an All-star. But that doesn’t make Kershaw’s snub any less notable. Shame on the fans in Los Angeles. Shame.

Now for the part I love best, predictions! The 2015 All-Star game is no longer simply about the pitching, as this season the National League doesn’t have nearly as much of an advantage. The NL starters are highlighted by Scherzer, Greinke, and Bumgarner, but the American League has their equal. King Felix, Dallas Keuchel, Chris Archer, David Price, and Chris Sale are a formidable set of pitchers that NL batters will be lucky to score against.

With the pitching more even than ever, this All-Star game comes down to Mike Trout versus Bryce Harper. Each team’s big bats have to produce, and do so early, for their squads to win. The advantage finally falls to the American League with the likes of Prince Fielder, Albert Pujols, and Mark Teixeira in reserve for the AL. These former and current superstars don’t have many All-star games left, at least for Pujols and Tex. They will do everything and anything to go out with a literal bang.

I’m predicting a 5-3 victory for the American League. This one wraps up in nine, with no extra innings necessary. The game’s Most Valuable Player award goes to the Royals’ Lorenzo Cain who finishes 2-3 with 2 RBIs and a stolen base in victory.

The Home Run Derby competitors were also announced. We debated the merits of this new, potentially wacky, format already. I think some predictions might be in order, but all I have to say for now is Albert Pujols!

More Sports: Is the New Home Run Derby format Hot or Not?