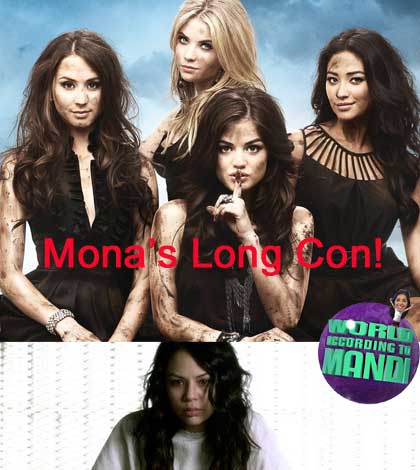 It’s Fangirl Friday video blog and it’s Pretty Little Liars edition. We have a new A theory and it’s all about Mona’s Long Con!

Everyone knows that Mona started the whole A thing. She was A tormenting the girls after Ali’s “death.” BUT Mona went crazy and got herself thrown into Radley where she met Leslie. Once Mona comes out of Radley she makes no mention on her new friend but does everything in her power to get back into the good graces of the PLL’s. She plays the victim. She seduces Mike Montgomery and she rekindles her relationship with Hanna.

Once Ali comes back alive and Mona acts as if she’s threatened by Ali. She fakes her own death with A but then is “double crossed” by A and put into the dollhouse. When the girls get taken they bond with Mona since they’re all victims BUT Mona was just playing the girls kids.

Mona has been A the whole time. She didn’t ever stop being A. She just enlisted more people to help her. She just got the girls to trust her. Even now she’s using Leslie Stone as a bit of a scapegoat BUT let’s face it Mona’s meek character is always the fake character and her CRAZY BITCH character is her true self!

Thanks for throwing us off your scent Mona but we’re on to your long con!

Happy Fangirl Friday! Did you fall for Mona’s Long Con?