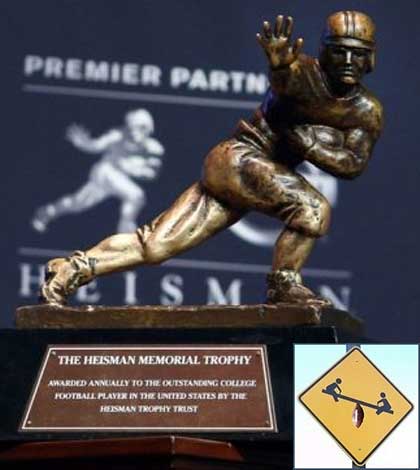 A quarterback will likely win the 2015 Heisman Trophy, but two players from Ohio State and USC are obvious front-runners. Can their teams do enough to elevate them atop college football, to win the nation’s most coveted prize?

When it comes to picking the Heisman Trophy winner, quarterbacks are king. The last five winners of college football’s most prestigious honor have played quarterback, and 13 of the last 14 have been QBs.

When pondering who will take home the Heisman for the 2015 season, a few talented players can thus be ruled out. Really only QBs and running backs even have a chance. Also, the Heisman almost always goes to a winner. Questionable team talent is a death toll for a Heisman hopeful. The odds for who will win the trophy represent these feelings.

The list of favorites is one quarterback from a highly ranked team after another, with running backs sprinkled in for aesthetic purposes. TCU QB Trevone Boykin is the overall favorite. He is followed by the Ohio State bigwigs J.T. Barrett and Ezekiel Elliot, and then the rest of the pack.

I love Barrett’s chances this year if he manages to hold onto the starting gig all season, but that still feels like it is yet to be determined. The odds even represent this as likely backup Cardale Jones remains in the top 10 in terms of lowest odds across the country.

Just a tad deeper down the list are a couple of quarterbacks I like for the Heisman this season. They all play for elite schools but seem to be just sliding under the brightest radar for the time being. I like that out of a Heisman favorite.

My targets are Cody Kessler, Deshaun Watson and Connor Cook. All of USC, Clemson and Michigan State will be in the running for conference titles and a playoff berth, and these three guys will be running the show each week. Kessler was especially amazing last year for the Trojans and no one talked about it.

This could be the return of USC to the nation’s elite as Kessler is added to the school’s vast list of award winners.

We picked our finalists for the 2016 College Football Playoff, and both of us are high on USC and Ohio State. You also liked Georgia and Auburn, while I favor big boys Alabama and Oregon. It will certainly take a playoff berth to win the Heisman, or a major snub of a dominant team sitting in fifth place. I’m looking at you TCU.

I think the Heisman race ultimately comes down to the quarterbacks of Ohio State and USC. Both J.T. Barrett and Cody Kessler are poised to steal the show this season, leading their teams to the Playoffs. I don’t see much of a fall from OSU, and the Trojans are going to make a statement. No other schools will put together a more complete resume to support their quarterback’s statistics than these two.

Now the real question is, will Ohio State stick with one quarterback all season, or mix it up with such great depth at the position? Traditional football logic says you pick your starter, your team leader, and let him run the show. Barring an injury, why rock the boat by swapping players at the most important position? Yet the college game is where experimentation lives and works to success. If anyone can make a change of pace QB work, its OSU this season.

If you couldn’t already tell, I agree with you. I like Cody Kessler to win the 2015 Heisman Trophy. I’m not convinced the Trojans can with the championship, but Kessler gets his team to the Playoff. That will be enough to win him this coveted award.