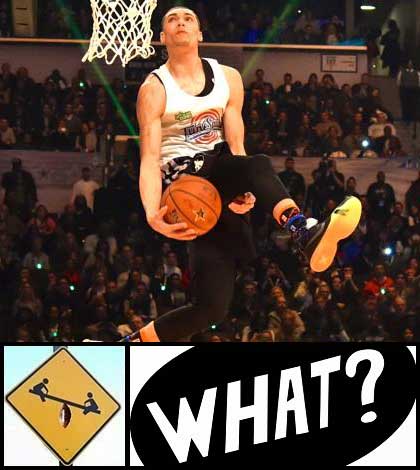 To celebrate the end of NBA All-star weekend Seesaw Sports is holding its own 2015 Dunk contest. Three crazy dunks, but only one winner. Be the judge.

Another NBA All-Star weekend is in the books so I thought we should hold our own dunk contest at Seesaw Sports. I have three competitors for you below. Just like a judge, give each one a rating between 6-10.

These folks, whether because of size, age or species, wouldn’t make the real dunk contest, but this is the next best thing.

Contestant No. 1 – Too Short to Hoop

Contestant one I’m giving a solid eight and a half (8.5 out of 10). I gave some points for style, with the between the legs twist he added to the off the wall slam. Great execution. Excellent nickname “Too Short to Hoop.”

Contestant two can dunk and he’s got some solid skills to nab his rebound so smoothly. I’m giving him a nine (9 out of 10). He slammed it home so well it was almost like he planned it. Those are style points you can’t ignore.

Contestant No. 3 – Wet and Wild

Contestant three has the full package going on. I’m giving him an eight and a half (8.5 out of 10). Perfect form and a firm dunk, but would have liked to see a little flair.

Contestant two, Try try again, is the winner of round one of our 2015 Dunk contest!

I’ll have three new dunks on Friday for you to judge. Get ready.