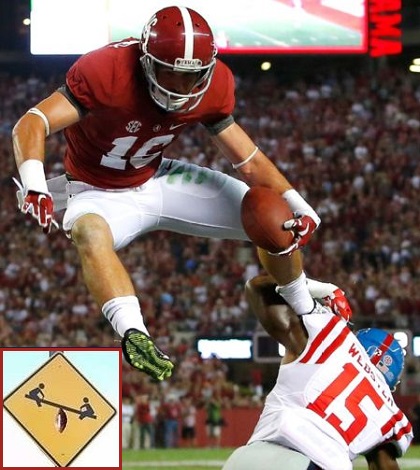 Blind laterals, blocked punts, and last second touchdowns have ignited the college football world. But these are the 2015 College Football Top Plays. Only one can be the best, and it ended a season.

We are just one week into the month of November and this has already been a college football season filled with miraculous finishes and unbelievable plays. I’m going to give you the Mount Rushmore of top plays from the year so far and want you to rank them in order of incredibility.

I know there were many other plays already this season that were great in their own right; great catches, awesome throws, that type of thing. There were also smaller, individual plays that didn’t decide an outcome or make this cut although they were still memorable. There just isn’t room! That’s how crazy the 2015 season has already been. Games, and often seasons, were decided by the conclusion of these four plays.

It was the first return touchdown of its kind as time expired that I can ever remember. It saved MSU’s season and ruined Michigan’s. It came in one of the biggest rivalry games in the country.

It was beyond fluky and actually should have been waived off a number of times. The entire officiating staff was suspended afterwards for how many calls they missed on the play. It ruined Duke’s season. It brought Miami back into the national conversation, if only for one week.

It was Kick Six II. The GT coaches were screaming for their player NOT to pick up the ball. It ruined Florida State’s chances at the playoff.

It was a blind, backwards lateral heave on fourth and 25!! It came in overtime. It didn’t result directly in a winning touchdown, but it resulted in a first down that led to a win. It shut the door on Ole Miss’ chances of making the playoff.

Those are the four. Hopefully I’m not forgetting a big one. With all the highlight-inducing drama week after week, it’s hard to keep up!

I was so naive earlier this year to think nothing would ever top the Michigan State return. This year has been so wild, it may not even be among the top three plays anymore, but I’ll leave that up to you.

Blocked Punt for the win!

Maybe I’m a prisoner of the moment, but with Michigan State’s most recent loss to Nebraska more or less eliminating them from the Playoff, I’m inclined to slash the significance of their Top Play as well. What defines a Top Play can not simply be its execution, but also the outcome it unleashed upon the sport.

I’m ranking these four plays from least exceptional to most exceptional. Each was outstanding, but only one can be considered the Top Play.

This play is the least exciting of the bunch for two reasons. The obvious one is that this play itself did not end the football game. Although it was exciting, the blind lateral was not a game winner. It merely led to the ultimate go ahead score for Arkansas. The victory by the Razorbacks eliminated Ole Miss from playoff consideration, but they were not even in the top 15 to begin with. This is the second reason for our blind lateral’s ranking, the overall ramifications of the outcome are lower than the competition’s.

I would rank this play higher if it had not been completely illegal. One blown call and I can still validate the multi-lateral. I can still give kudos to its execution. But multiple blown calls by the officials, all of which would have ended the play and the game, truly hurts the significance of this play. No matter how spectacular Miami was in actually lateraling the football and scoring, it should have been blown dead. It wasn’t and the play stands, but it’s not nearly as exciting because of it. Miami also defeated Duke, a team that holds little weight in the national college football conversation. The ramifications of this play’s outcome were limited to the ACC.

Not only did Michigan State execute one of the sweetest plays in football, a blocked punt for a touchdown, they did so against their bitter rival, the Michigan Wolverines. The victory also saved MSU’s season at the time. Their playoff hopes got dashed this past weekend with a loss to Nebraska, but that doesn’t minimize the significance this victory had on Michigan State’s season. The only play that tops this in excitement and sheer difficulty is what transpired in our Top Play of the season.

If blocking a punt for a touchdown is difficult, then blocking a field goal for a touchdown is near impossible. Its hard enough to block a field goal, let alone scoop it up and score six points going the other way. I love how you called this a Kick Six. Georgia Tech stole a game it had no business winning, against a FSU team with serious playoff aspirations. They did so on the final play of the game, scoring in one of the most difficult ways possible. The stakes were high and the improbability was off the charts. This is the best of our 2015 College Football Top Plays.