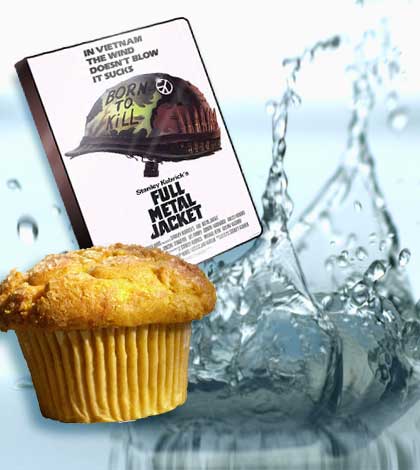 I got a ton of mixed reviews for last weeks review of Ralph’s purified drinking water. The Newark Times called it “a disgrace to everything Americans fought so hard for,” while the Associated Tim’s said,”although he’s not the reviewer we deserve, he’s the reviewer we need.” But I think the op-ed in the Daily Press Gazette Newz summed it up best, “like it or not, water reviews are here to stay.” Amid such controversy and hype, I hesitate on what to do next and only one thing is clear: time to review Arrowhead.

A native American favorite, Arrowhead advertises that it is 100% mountain spring water, which may explain why it tastes like s***. And by s***, I mean f****** s***. This is terrible water that really flubs up in every category and leaves me doubting if happiness is not only attainable but even truly exists.

I got the bottled water while at a nearby coffee bean along with a black and white muffin and a small iced coffee. I sat down and grabbed a newspaper that, of course, had three articles discussing and arguing about my review on Ralph’s water. Criticism really gives me the hunger up so I snatched my muffin and began to peel off the muffin paper. Problem is, the chocolate glaze that covers the muffin top had apparently drizzled down while still in its liquid state and now had hardened over the paper, so when I had to violently peel down the paper, shards of chocolate went flying across the room. I wasn’t sure at first the fun to danger to delicious ratio, so I went with my gut and didn’t stop until the muffin paper was fully separated. When I looked around the room it looked like Hamas had teamed up with Willy Wonka to take back the holy land this coffee bean was built on. Chocolate shrapnel everywhere, people wounded and dead, recovered chocoholics losing years of progress and also the place was on fire.

Not really, jay kay! But I did hit an elderly Chinese lady in the eyeglasses and she got peeved so I didn’t really enjoy the muffin or coffee. I thought the Arrowhead water would be the saving grace and I was excited for the 100% mountain spring taste but ’twas a major disappointment. The bottle was too girthy, the label was overconfident, the cap reminded me of Russia(in Russia, bottled water cap screws you!), and to top it all off the water itself tasted like a mountain lion pissed upstream. My day was officially ruined and on top of all that I was having a bad hair day. Sorry, Arrowhead, ya flubbed.