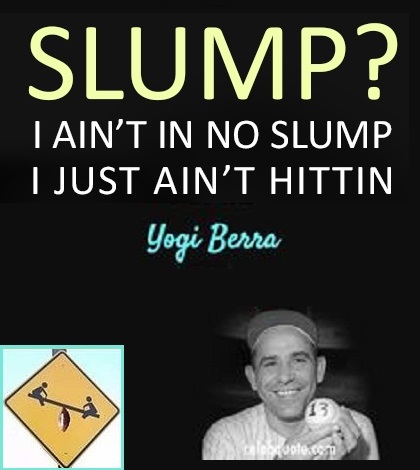 We continue honoring a legend, as Yogi Berra quotes are the pinnacle of great sayings. It’s the MLB Postseason edition of “They said what?” sports quote game, and we’re putting Berra’s words to the test. Did Yogi utter these quotes or not?

After 4 1/2 rounds, Todd is ahead with 5 points, to Dan’s 4 points. Will Yogi Berra level the playing field? “They said what?”

Alright, you stumped me fair and square with your Yogi Berra quotes on Monday. Let’s see if you can pick the impostor from these three wacky sports quotes. Only two were said by Berra. Which is the odd quote out?

Quote one: People say that life is the thing, but I prefer reading.

Yogi was a wise and unpredictable man, but you must have gone to the bottom of the barrel for this batch of quotes. I thought I would at least recognize one, but that doesn’t seem to be the case.

Quote number three seems Yogi-ish and it resembles his more famous phrase about 90 percent of the game being half mental, or some such nonsense. I’m going to assume number three was his along the same lines.

For quote number one, I can’t picture Yogi reading or saying he preferred reading. I don’t know why, but it seems out of character. Whereas number two does seem like a Berra quote, albeit one I’m not familiar with. Again, he has a quote that resembles the same mindset; something about if we don’t know where we’re going, we may not get there.

So assuming he branched out from his own thoughts (and wasn’t paraphrased by someone else), I’m going to say two and three were said by Yogi. Tell me one was the outlier. Who said quote number one?

I pooped the bed on this one, but your complete dismissal of a professional athlete’s interest in literature is beyond disrespectful. Perhaps Yogi loved books. Perhaps Yogi was an avid reader who would have loved diving into a good book, rather than venturing out into the world.

Regardless, you are correct. Quote one is the impostor, uttered by Logan Pearsall Smith, a famed American-born British essayist and critic. No, I haven’t heard of him. But yes, I did think his quote oozed Yogi Berra.