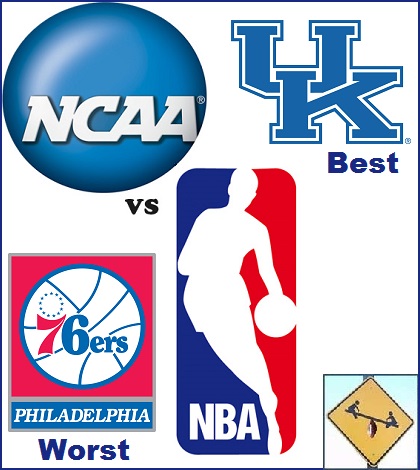 Pit the worst NBA team, the Philadelphia 76ers, vs the Best NCAA team, the Kentucky Wildcats, in 2014/2015 and we have ourselves a sports debate. Can a college basketball power finally defeat the dregs of professional basketball? Worst NBA team vs Best NCAA. Go.

Something has come up in the world of basketball.

Now it’s not earth-shattering because this specific thing comes up relatively often. However, in my lifetime, perhaps in the history of the NBA, at least since the NBA/ABA merger in 1976, right now is the closest this thing has ever been to being legitimate.

Okay, I’ll leave you in suspense no longer. This thing is the discussion that a current NBA team could lose a basketball game to a current NCAA team. The worst NBA team vs the best NCAA team.

This discussion is mentioned all the time when there is a historically great collegiate club who rolls through all comers. However, the meat of the argument this time stems from the fact that the current Philadelphia 76ers may very well be the worst collection of NBA players in the history of the sport. That, combined with the incredible talent at the division one college level, actually makes this intriguing for once.

Let’s start on the collegiate side. The Kentucky Wildcats are the number one team in the country according to the preseason polls. They are loaded with talent, like half-the-first-round-of-the-NBA-draft-is-going-to-be-Kentucky-players loaded. And that’s barely an exaggeration. Depending on who stays and who leaves early, UK probably has close to 10 eventual first-round picks on its roster.

However, a lot of these kids are freshmen, and no matter how good a freshman basketball player is, they still have lots to learn.

I’m more partial to Arizona. These Wildcats have a great defense and blend incoming freshmen phenoms with a starting lineup of returning contributors.

It’s too early in the CBB year to know who is the best though. The point is, a handful of teams have extreme talent at their disposal. Which brings us to someone who does not: the 76ers.

The “worst NBA vs. best NCAA” argument usually falls to pieces because even the worst NBA team in a given season has a roster filled with previous collegiate stars. It’s just no comparison.

The 76ers, a team comprised of players with the sole purpose of losing a bushel of games and gaining the top pick in the NBA draft, is still filled with a bunch of former collegiate stars.

Depending on health, there are at least 13 current Sixers who would start for any and every team in America at the collegiate level. They wouldn’t all be a specific NCAA team’s best player, but pretty much the whole roster would start for anyone without argument.

This debate is usually an exercise in idiocy, yet in 2014/2015 I’m willing to consider it a conversation. The worst NBA team is the Philadelphia 76ers and the best NCAA team is the Wildcats. For arguments sake I’m going with Kentucky. Can the NCAA’s top dog compete with the dregs of NBA basketball?

I say that in 2014/2015, yes, yes they can. The Wildcats can take the 76ers. Here’s how the Kentucky starting five matches up with the starting five in Philadelphia.

This is actually a good game. Now I know how to be realistic, so I’m betting on the NBA guys to win this thing nine times out of ten. But it’s a real game, on the level of the NBA’s best team versus its worst team. Add in the fact that coaches will be involved, and I like John Calipari’s chances versus Brett Brown. I hate to speak ill of a fellow Boston University alumni, but the majority of Mr. Brown’s coaching experience took place in Australia. A fine country, not known for its basketball.

People like to attempt this debate in football, which is completely ludicrous. In baseball and in hockey its pretty insane to consider as well. But with basketball, when your best player makes all the difference, we can actually sit down to the table and talk it out.

I’m an NBA fan, but I’m only familiar with one player on the 76ers starting lineup, Nerlens Noel. I’m also a fan of NCAA College Basketball. I’m familiar with four of the top seven players on Kentucky. Lee, Booker, and the Harrison twins are all known names in basketball.

I hate to break it to you, but this debate is only heating up. As the Sixers continue to lose and the Wildcats rack up wins, we won’t be the only ones arguing over worst vs best. I think its time we got video games involved. If any medium can solve a debate like this, it’s a video game.