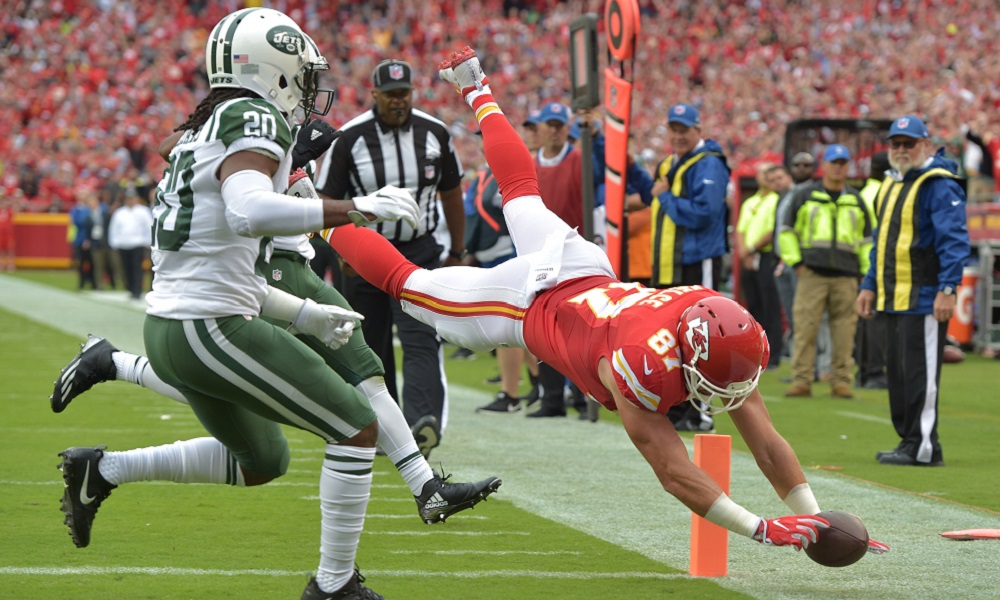 Forget the final score. Sunday’s loss to the Kansas City Chiefs was the WORST game in New York Jets history. Just enough hope and an insane amount of pain.

The New York Jets felt like a good football team after two weeks, but would a good football team suffer the worst loss in franchise history? After six interceptions and eight total turnovers, with just enough hope sprinkled in to make fans squirm, Gang Green fell to the Kansas City Chiefs. There have been bigger blowouts and more embarrassing plays, but in terms of sheer humiliation, Sunday’s loss was worst of all.

It’s not simply that the Jets came up short. Arrowhead Stadium is one of the toughest places to play in the National Football League and the Chiefs are a good football team. No one expected this to be a cake walk, but after decimating the Buffalo Bills, no one expected what would transpire. New York managed to turn every positive into a negative. The team could not break history either, remaining winless in road games in which they fall behind by at least fourteen points.

ALSO ON BUZZCHOMP: Remembering Jose Fernandez and His Smile

As a fan I can not forget. The team has already, but this game is sticking with me. I have truly enjoyed rooting for Ryan Fitzpatrick and watching him play. But now there is an awful taste in my mouth. After looking like a Pro Bowl player just a week earlier, Fitz lost all of his accuracy. He stared down his receivers, telegraphed his plays and was out of sync all afternoon. Despite his inability to play up to his own level, the Jets found the Red Zone countless times at Arrowhead. Yet a disturbing trend continued to play out, as New York kept relying on its quarterback who was truly not himself, rather than trusting its star running back. Matt Forte is having a great year, yet the Jets held back.

Kansas City entered the game as a team unable to stop the run. They did a good enough job early on, scaring the Jets away from their strength. But ultimately none of that made the game the worst in franchise history. The fact that New York was still within striking distance until late in the fourth quarter was agonizing. The team looked bad. They looked out of rhythm and a shell of their former selves. Yet they were still close and victory was still within reach.

That is the definition of pain and what makes this football game the worst of all. The New York Jets are known for punishing their fans and they did so with a sledge-hammer on Sunday. The first half was mostly body blows. The team was playing anemic, but the game was within reach. I paused the action on my television just before the third quarter got underway, hoping to wash the stink of failure from my Sunday afternoon of football. No such luck.

The remainder of the game felt like eating an ice cream sandwich while being punched in the face. The defense shut down and shut out the Chiefs. Wonderful! New York’s offense could not catch a break and literally gave the game away. Multiple interceptions in the endzone and another that was run back for a touchdown put the final nail in our coffin. Terrible! I’m not sure what transpired in the locker room at half time, but apparently only half the team was listening. I’m guessing it went something like this:

Coach Bowles to the Defense: You boys are playing like fools (edited for language). Its time to step up and play like the great unit you know you are. Their offense stinks. Let’s get to work.

Coach Bowles to the Offense: Just find your rhythm and do what you do best. We need to pick up the pace and just make plays. We had opportunities and now its time to capitalize on them.

The defense was listening and played like a different team in the second half. The offense probably needed to hear something a bit different and certainly did not pick up the pace, stop making mistakes, or capitalize on anything in the third and fourth quarters.

If we define a loss based upon expectations entering the game, hope for victory during the game, and quantity and quality of mistakes, then this is by far the worst loss in franchise history. I’m forever the optimist and the 2016 Jets are not the team that failed to play on Sunday. But I’m tempering my expectations for the season, because no matter what happens going forward, that loss happened. I sat there and allowed my team to make me feel like a fool. It did not go over well.

Dissecting Hollywood: Where do The Emmys’ Losers Go from Here?