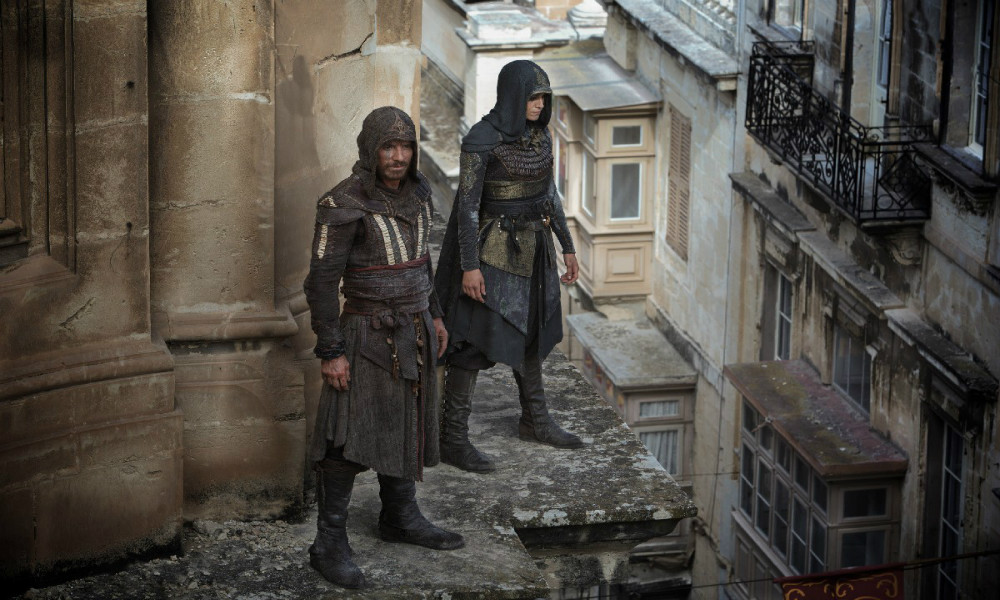 Assassin’s Creed, starring Michael Fassbender, comes out this winter. The film’s first trailer has been released. It looks pretty good, which may open the door for it to be the greatest video game movie of all-time. The bar is pretty low… (Photo Credit: comingsoon.net)

Yesterday, the first trailer for Michael Fassbender’s upcoming movie, Assassin’s Creed, dropped. The trailer makes the film look somewhat promising (Check out Dan’s Vlog Reaction on our Channel). The game play in the Assassin’s Creed video games is spectacular. It lends itself perfectly to a spy/action adventure. In the video game, the plot point of having the main character occupy the mind and body of a person from the distant past seemed completely arbitrary and unnecessary. Ironically, this story arc seems to lend itself better to the movie medium. The film makers altered the design of the Animus (the technology that allows such a transfer of mind and soul), and it seems to play even better this way. I am on board.

Since this movie has yet to come out and will not be released until December, it may be jumping the gun a bit, but it seems that Assassin’s Creed has a legitimate shot at being the greatest video game movie of all-time.

Now, the main reason for this possibility is that the competition is atrocious. There frankly has yet to be a movie based off of a video game that was anything better than mediocre. Mortal Kombat and Prince of Persia did well at the box office but not on the screen. The original Tomb Raider flick with Angelina Jolie (which is being remade, by the way, with Alicia Vikander) was horribly reviewed. Same with the Resident Evil movies. The Final Fantasy movies seem to have a cult following, perhaps simply due to the context rather than the films themselves. No one can escape Final Fantasy VII good vibrations.

There are so many others that people forget because there was nothing memorable about the films (Need for Speed, Silent Hill, Hitman, Max Payne, Doom, Super Mario Bros.), and none of them received anything better than middling reviews. This really remains a wide open race.

The new Warcraft movie is going to beat Assassin’s Creed to the screen by a number of months. The former comes out this summer. But early trailers for Warcraft make the movie appear so generic it’s frightening. This is probably going to be a them-versus-us-until-the-two-sides-understand-each-other paint by numbers. There is no reason for this to be about Warcraft at all other than the use of the species from the video games. Keep the exact same script and slap a different title on and this movie would come and go without a second glance.

There is also an Angry Birds movie due out and a Ratchet and Clank movie that was just released. Angry Birds seems to have somewhat solid early reviews (unlike Ratchet and Clank), but that is strictly a children’s movie in which the bar is certainly much lower. Oddly enough the current correct answer to what the greatest video game movie of all-time is might be a previous children’s movie: Wreck-It Ralph. This may not count since it wasn’t based on a specific video game, but rather a slew of past video game characters and a created universe involving them. If it counts, it’s number one because it’s a smart, sweet, engaging and entertaining film that is fit for all ages. If it doesn’t count, the spot remains open. I don’t know if Assassin’s Creed will take that spot, but the stage is sure set up for it.