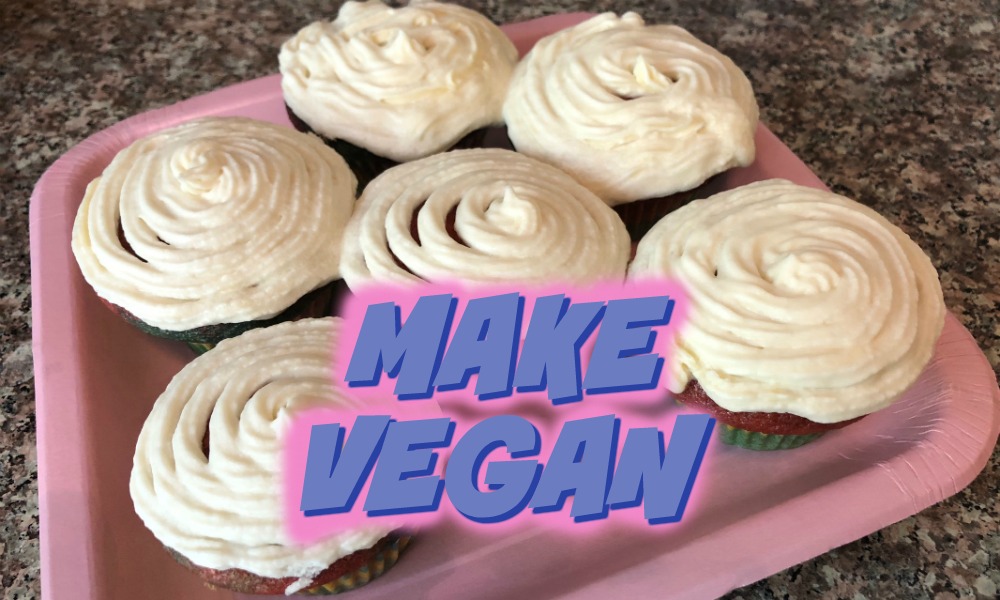 It’s easier than you think to make recipes vegan! I love vegan food and even though I’m not vegan, I do a ton of vegan cooking because my friends are and its often healthier. Now I’m sharing how to make any recipe vegan!

Gone are the days when you hear someone is vegan and you think that all they eat are steamed veggies and salad. Vegan cooking is easy and there are so many amazing recipes and dishes that you already love, but didn’t realize are vegan. Do you like Mediterranean food? Its one of my favorite styles of food and two wonderful staples are vegan. That’s right, both falafel and tabouli salad are vegan. It’s not even something you have to think about when you go to a Mediterranean restaurant, i.e. Greek and Lebanese restaurants as well. But more to the point, you can easily make any recipe vegan!

The best part about vegan cooking and making a recipe vegan is that it’s really not difficult. As long as you have some staples in your kitchen like vegetable broth, nondairy milk, and vegan butter, you can make anything vegan. One of my favorite style soups is broccoli and cheddar soup. Let me first say that I love cheese, but I know that you don’t need to eat cheese at every meal. I also love making homemade soups and one of the first style soups I made vegan is broccoli soup. The first switch I made was to use vegetable broth instead of chicken broth. For the vegan broccoli soup I lightly sauté mushrooms with garlic, then add the broccoli and vegetable broth. I always season my soups with a little pepper and hot sauce as well. Once the soup comes to a boil, I lower the temperature and cover it. Normally I let it simmer for 20-30 minutes. Then I use an immersion blender to puree it. This soup is super creamy on its own and you don’t need to add any cream or cheese!

MORE BUZZCHOMP: How To Lose Weight Without Working Out!

If you feel like you need to make a soup creamy, then try adding some unsweetened almond milk. This is one of the key switches that my family and I made. We let go of dairy milk entirely. I was never a big fan of dairy milk since my teen years, but I do remember loving chocolate milk as a child. I haven’t had chocolate milk in a very long time and it’s been years since I made the switch to almond milk. Once I did, I never looked back. I use it in a variety of dishes and I love adding it in unexpectedly to make a dish creamy. There’s a lot more depth to nut-based milk as compared to dairy milk. That’s why nondairy milk is a key ingredient to vegan cooking.

Another easy vegan recipe is pasta with a creamy “meat” sauce. This is one of those recipes that is so easy, anyone can make it! All you need are some veggie crumbles and you can get them at any major grocery store. Buy a simple tomato sauce, unless you like to make your own, your favorite unsweetened nondairy milk and whichever pasta you like. Cook your pasta and sauté your veggie crumbles in a medium sauce pan with a little olive oil, garlic, and spices to fit your current fancy. Add your tomato sauce and about 1/2 to 1 cup of nondairy milk. Once your pasta is done, mix it with the tomato “meat” sauce and boom, you’ve got vegan “meat” sauce pasta. The nondairy milk gives it a nice creamy texture and even if you’re a cheese addict, you won’t miss the cheese.

Cooking often requires butter, and vegan cooking is no different. I started using vegan butter initially as a spread, but then I bought the sticks and learned to bake with it. Substituting nondairy butter for regular butter is such an easy switch. You can make delicious breads, desserts, and pizza with nondairy butter. One of my recipe staples is pizza and all you need is nondairy milk, vegan butter, flour, and baking powder. This is a recipe that originally called for regular milk and butter, so I substituted and have never looked back! Get some Daiya cheese and top your pizza with a ton of veggies. It’s super delicious and easy to make!

Simply switching a couple of the staples you buy like broth, milk, and butter is a really easy way to make any recipe vegan. They still taste great and are filling. You won’t miss the other versions and you’ll be surprised that your family and friends love them too! I doubt they even taste the difference.

More from Mandi: How To Use Resistance Bands