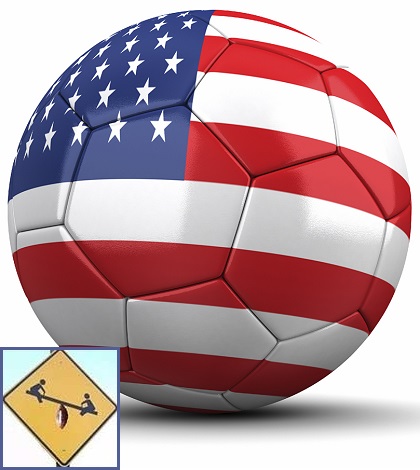 US Soccer is taking off, with a women’s World Cup victory and excellent showings by the men’s national team. But does the sport of soccer still suck? Despite being popular, has anything changed about the game? Sports debate.

Soccer in this country seems to be taking off. With the US women being co-favorites in the World Cup, everyone was ready to embrace the sport. The fact that they won the tournament inflated everyone’s desire even more.

Following that, the men’s team played in the CONCACAF Gold Cup tournament. Even though they lost in the semifinals, the sport’s momentum was and is still traveling. The Premiere League championship was televised nationally earlier this summer, as was the UEFA European title and the Copa America cup. Television and sports fans in general seem to be migrating toward the rest of the world here.

So my question to you, on the backs of this rolling success of a sport often overlooked in the United States, doesn’t soccer still suck?

Bear with me here, but the reason soccer wasn’t as popular was not because Americans had some vendetta against it; it’s because the sport is terrible and corrupt both on and off the field.

How often can you watch a player fall down like a jackass, feigning injury, before it gets tiresome? Why oh why do they not stop the clock?? They could have an unpaid intern do that job; that’s how simple of an alteration it is. Why is there still rampant racism and thuggery in soccer across the globe?

These are all ridiculous things that make the sport unwatchable and unenjoyable no matter how many World Cups the country wins.

US soccer and the sport of football internationally do not suck. The sport itself is excellent and a great in-person experience for fans. Yet that does not make the “sport” of soccer, mainly the mainstream fan experience, a good one. Simply put, its fun to play and attend a game, but everything else kinda stinks.

Let me first dispel the crazy rumors you are trying to spread by creating some context. Yes its annoying that soccer players fake injuries a lot. This also happens in the NBA. Flopping got so bad the league did something about it. Yes its ridiculous that soccer chooses not to stop the clock, leaving both players and fans unaware of how much time is actually left in the game. Yet there are tons of crazy rules in other sports that remain unchanged for posterity, such as the lack of a Designated Hitter in half of Major League Baseball, or the NFL’s refusal to put a video camera along the goal line to determine touchdowns. There is one huge difference between soccer and the other major sports, however.

Soccer, and FIFA in particular, seem vehemently opposed to change. Where as the NBA enacted rules to combat flopping, MLB is working in new rules to speed up its game, and the NFL is now testing new PAT rules to remove the most boring part of its sport, soccer and international football seem content to stand pat. This is a major problem.

Soccer is not a great television product. All of the examples I noted above in regards to America’s major sports are examples of leagues working to improve the primary viewing experience of its fans. That experience is on television. The obvious exception here is hockey, which has worked tirelessly to improve itself, yet remains an average TV product that mainstream fans tune out. But soccer is growing by leaps and bounds in this country, seemingly without any improvement to the actual game itself.

It seems both obvious and ridiculous that the only reason soccer is getting more popular in America is that our home-grown players are finally good enough to compete on an international level. But its the truth. America is a country of winners, a country of front-runners and celebrity followers. We love the best, or anyone who can pretend to be the best successfully. Without a team USA that made us proud, US soccer fans were few and far between.

So soccer solved its biggest problem, and is now growing in America. Our country seems to have embraced the sport and its quirks. Yet I agree with you, there is a well-defined ceiling to its popularity. The sport can destroy that ceiling if it chooses, but right now its built-in steel.

The rampant corruption in international futbol is a major turnoff. Look how hard the American media came down on steroids and inflated NFL footballs. It will not let the FIFA mess simply blow over. Yet the real issue is that soccer is still pretty boring to watch on television. The game simply does not translate to a single screen experience. Either a huge screen is needed to show the entire field, or a split screen format must be used to show closeups on the ball and wide on the field. Cameras need to follow overhead like in the NFL, so we can be up close on the action. But mainly, there needs to be a big play fans can root for.