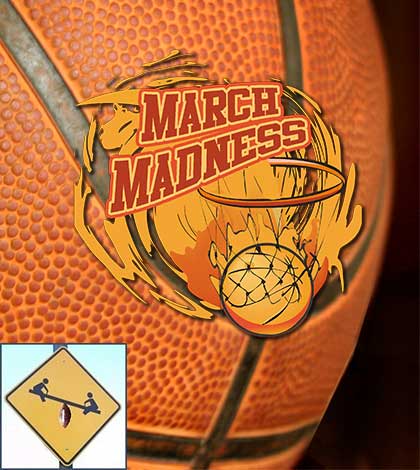 Its been Upset city baby! Only one of our brackets has busted, thanks to some Bruins. But do the numbers point to more surprises as March Madness 2015 continues into Day 2? Top heavy and full of controversy. Basketball reigns supreme.

Its upset city baby! At least it was for several high seeds on day one of March Madness 2015. How’s your bracket looking? Go on, be honest.

I see quite a bit of red on your sheet there brother. But the upset that hurt you the most was barely one at that. UCLA defeating SMU hit you hard, knocking out one of your Final Four. I on the other hand had the Bruins. I know the game ended in controversy, but UCLA rode a strong finish straight into the tournament and it was not surprising to see them advance.

The two fourteen seeds taking down threes are my lone mistakes so far. I’m sure some hotheads picked both Georgia St. and UAB to win, but you people are crazy. Picking both upsets was a ridiculous hedge.

My question for you, as day two gets underway. Do you believe we are in store for more victories by smaller schools? March Madness usually sees a few five seeds lose to twelves. However, I’m not convinced we’ll have those this year, now that the fourteens have won. I realize the two things aren’t correlated, but I only have one more major upset left on my books. I like Valparaiso over Maryland.

So far the big dogs have also been dominating. Arizona, Kentucky, and Villanova all made strong showings, a very good sign for both our Final Four predictions and the majority of America’s as well.

The thing that was suspected before the tournament began and was really confirmed even though just half of the round of 64 has been played is the fact that this year’s tournament field is very top-heavy. And this isn’t even because of Kentucky.

UK is just one of a couple of very good teams near the top of college basketball. It had been like that all year. The other side of that is not to disparage any mid-majors or Cinderellas from saying they had a chance to make a run but instead to say that the middle tier of the tournament was very weak and prime for upsets.

I liked Georgia State for that reason. You saw it with UAB and S.F. Austin and Northeastern and Harvard and Wofford. You may see it today too with your Valparaiso pick or perhaps with Buffalo, Boise State, UC Irvine, etc. The three-through-six seeds in the NCAA Tournament are better basketball teams than their double-digit counterparts, but the difference seems as slight as it’s ever been.

However, there still remains a divide between that group and the group near the top. So seed upsets may reign again today, but come the Sweet Sixteen and especially Elite Eight, I doubt there’ll be more than one intruder into the chalk. I tried to get fancy and pick that intruder before the bracket. As always, you had the smarter strategy. It’s better to nail, say, three of four than try to predict the fourth perfectly.

Of course, UCLA?? Come on! The Bruins were the worst team in this entire tournament! They stuuunk this season. Strong finish to their season? They beat USC twice! You and I could have at least split with USC if we grabbed three friends!