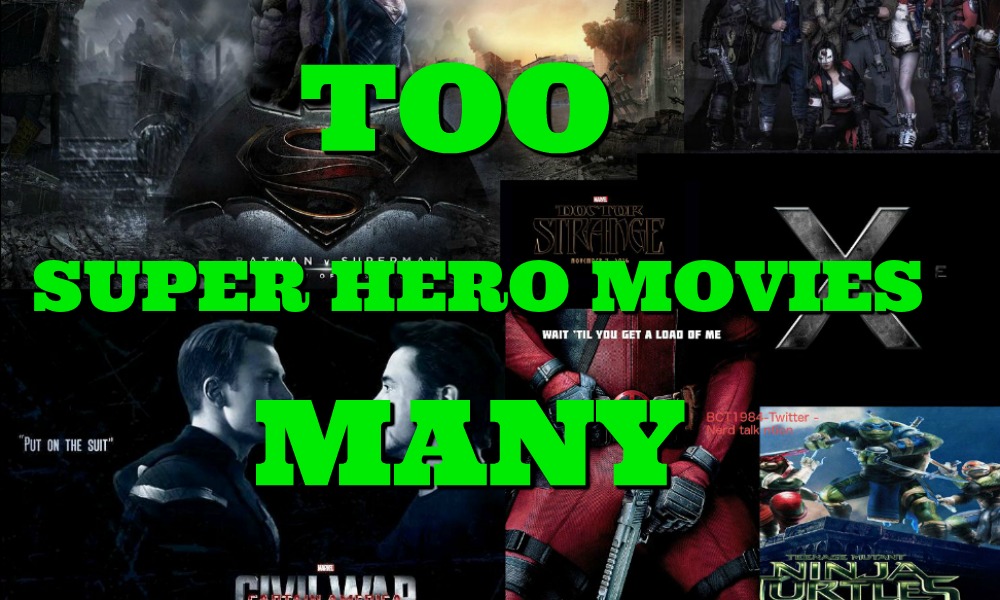 Movies are awesome and so are super heroes. But we have way TOO MANY Super Hero movies, with eight this year alone. I’m over it, because honestly, not every story needs a super hero.

I love going to the movies. Its one of my favorite things to do, but over the past couple of years I’ve gone less than I’d like to. Honestly, it has a lot to do with my lack of excitement for what’s out there, for all of those super hero movies! I’ve only been to the movies TWICE this year, but did see Deadpool at home. Oh how the critics swooned over Deadpool. “It’s so out of the box. It’s reinvigorated super hero movies.” Blah blah blah. I’m over it.

In 2016 alone there are eight super hero movies. Eight of them! I’ve actually seen two of them already, Deadpool and Batman V. Superman. While I enjoyed both of those films, neither were anything to write home about. Neither made me want more men and women in tight leotard outfits. Don’t get me wrong, I love Ryan Reynolds and it was fun watching him be bad ass and silly. But my life was not enriched by the movie and I wouldn’t have been disappointed to miss it. It just feels like white noise.

I get it, super hero movies make a ton of money. They are a safe play and there’s already two built-in audiences with a ton of source material, making them easy to green light. Children and comic fans alike will see every one of these movies. They practically feel obligated. They read the comics growing up, and even more people saw the cartoons and love that these characters are coming to life. But aren’t they getting a bit stale? Do we really care to see every super hero, every crossover and every possible film genre become a movie with a man in tights?

Captain America: Civil War came out last week and it just passed $700 million dollars at the box office world-wide. That number will surely keep climbing and that is a lot of people going to see that movie. While I have enjoyed the other Captain America films, I’m in no rush to see what happens. We’ve seen it already. I enjoy Chris Evans as Captain America, but I’d love to see him as a different character. These universes don’t end. No story concludes. They literally go on forever. That’s a nice thing for Marvel and DC and the other movie studios, but for us viewers we never get closure. Will the story ever come to an end, as all other stories do?

Two more super hero movies come out this summer, X-Men: Apocalypse and Suicide Squad. I don’t really know much about Suicide Squad, except that Jared Leto looks super BAD ASS and creepy in the movie. I’m 50/50 on whether I actually want to go and pay to see either of these movies. This bums me out kids!

Going to movies is one of my favorite things to do, but with all of these super hero movies coming out my judgement has been clouded. Are these actually good movies? Is the story truly good?

Do these movies have an endearing cheese factor, or a cringe worthy one? Sometimes these actors, after doing one of these movies, simply rest on what they did with the character and don’t add any depth or anything new. I’m sure that most of the fanboys and fangirls out there can’t honestly tell me that these are good movies. Entertaining yes, but look at Batman V. Superman. The story STUNK! It was so bad. Even in Deadpool the story was nothing special. Deadpool told us himself, it was a revenge love story. He had to save his girl and that is what he did.

I know I’m likely in the minority, but I want to see a movie with an interesting story, solid character development, and an unknown ending. The super heroes never lose. The villain never wins. Let’s face it, with super heroes we always know how the story will end.

But hey, who says we need to be surprised by a movie’s ending or a shift in a character? We already know the ending to our own lives and what other people will do, right? Wrong. Death is a given, but our story is unwritten. Why do we accept anything less from our movies?