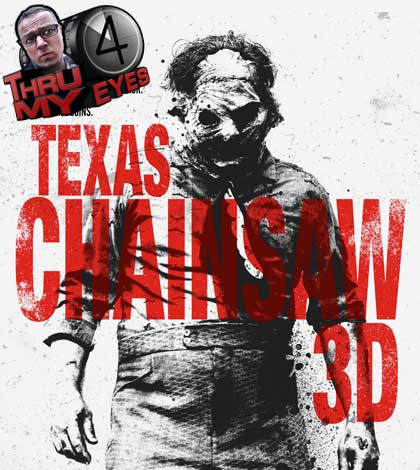 For this review it is technically “Through my 6 Eyes” because I had to wear my 3D glasses to view this feature.  This version is Directed by John Luessenhop (you don’t know any of his films) and stars Alexandra Daddario (Hall Pass).   I should say the “Amazing and Beautiful” Alexandra Daddario.  I want to thank the makers of this film who had the idea to make this version a 3D film and for the wardrobe department for what they had Alexandra wear.  That being said, this version of the Texas Chainsaw series stays true to the storyline and if you have seen them all, you should be pleased.  This version is one of the better one in the series thanks to Alexandra being in it.  I can watch her ready a dictionary in 3D.  Did I mention how gorgeous Alexandra is ???

Side story:  I met Andrew Bryniarski who played Leatherface in two of the Texas Chainsaw Massacre movies backstage at a Judas Priest concert.  He looked tough without the skin mask but I still think I can beat him in a Thumb War.