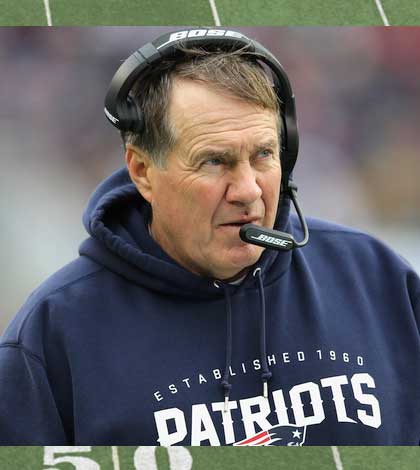 An NFL team relies on a lot of different people. On any given play, there are twenty-two moving players and a thousand tiny contests of skill, strength, and strategy. But each team relies on one man in particular to keep track of all of these little battles: the head coach. But not all NFL coaches are created equal.

Having the right head coach gives a team a major edge. These are  the top five NFL coaches in 2015. Every one’s a winner.

Pete Carroll spent this past offseason being pummeled for one bad play call at the end of last year’s Super Bowl. That’s not totally unfair, but it is an incomplete portrait of what Carroll brings to his team. There’s much more to being a head coach than gameday responsibilities, which is why Andy Reid is a good coach, even though he can’t seem to count his time-outs correctly. Carroll is a master motivator and a solid game planner, and that’s why he’s taken the Seahawks to back-to-back Super Bowls.

Tomlin is the youngest head coach ever to lead his team to a Super Bowl, and he did it in only his second year with the Steelers. After a down year in 2009, he returned to the Super Bowl in 2010, though the Packers took home the Lombardi Trophy that season. Tomlin has taken the Steelers to the postseason in five of his eight seasons at the helm, despite an aging core of players that has hurt the Steelers defense of late. With the Steelers retooling and getting younger, Tomlin is poised for a prolonged run of success.

Arians isn’t the flashiest name on this list, because he hasn’t yet won in the postseason. But when you consider the quality of teams the Cardinals face and the circumstances he’s dealt with, it quickly becomes clear just how good Arians is. Arians rose to prominence filling in for Chuck Pagano and keeping the Colts together during a difficult time. He took over the Arizona Cardinals and has won at least 10 games in his first two seasons, despite a ridiculous string of injuries to key players. His postseason failures are pretty easily explained by the injuries; if the Cardinals can stay healthy, expect Arians to collect plenty of postseason accolades to go along with his regular season accomplishments.

Harbaugh has brought his Ravens to the postseason six times out of the seven seasons he’s been with the team – no easy feat when trapped in a division with Mike Tomlin’s Steelers. Harbaugh has done an exceptional job keeping the Ravens relevant since their Super Bowl season, when inflated free agent salaries messed with their roster.

Harbaugh’s players have been good, but not unstoppable. Whether or not the Ravens can edge out the Steelers for the division is almost always an open question, and that’s the case again this year. Don’t be surprised if the Ravens answer in the affirmative yet again.

Bill Belichick is under fire yet again, thanks to a recent ESPN report that alleged further wrongdoing during the Spygate scandal. But this isn’t a morality contest, and we’re not here to discuss whether or not Belichick bent the rules. What we are here to evaluate is his skill as a coach, and his credentials there are unassailable.

Belichick’s Patriots have been the NFL’s most consistently excellent team since the early 2000’s. Yes, Bill Belichick has always had Tom Brady under center, but that’s not the whole equation. Peyton Manning, who is Tom Brady’s peer by just about every measure, has not had nearly the postseason success that Brady has. Belichick is the difference.

Belichick’s teams are consistently disciplined, and he’s shown a remarkable ability to mold players with behavioral problems. Belichick makes strong in-game adjustments, hires great coordinators, and is efficient and unsentimental when building his rosters. There’s no better coach in the NFL.