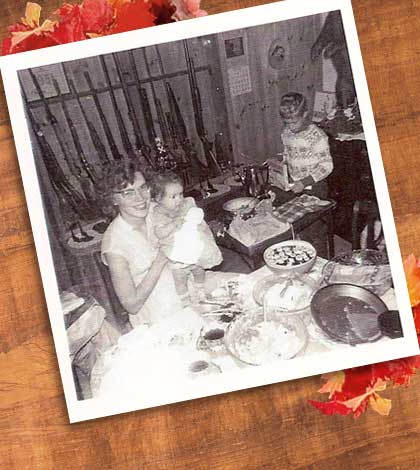 My telephone rang at 6:30 am. No one calls me at that hour except for two people, and only for one of two reasons: my stepson is staying with us and knowing that I rarely sleep past 3:30 or so in the morning, is calling to order his customary sunrise cappuccino, or my mother is calling from Oregon to tell me bad news.

“Son,” my mother whispered, “I’m sorry to call so early, but I wanted to tell you that Grandma passed away last night.”

I paused. I hesitated. I tried to clear my throat.

I hadn’t expected it to hit me so hard. Grandma Sherod has been ailing for some years and her health has steadily declined in the last few months. It’s like watching an avalanche in slow motion. You hear the ungodly roar as the hillside gives way. You see the terrible roiling landslide as it tears its way into the quiet valley below. You feel the earth tremble and the awful groundswell beneath you but you just can’t move. You just can’t get out of the way and then it hits you broadside, knocks you down and sends you reeling out of control. And just like that, just that suddenly the happiest and most innocent days of your childhood are gone.

My brother Howard and I had just been speaking about it a few days ago- Thanksgiving- and why it is our favorite holiday.

We lived in Bandon, Oregon on Two Mile Road in the early sixties, just a short quarter of a mile from Grandma and Grandpa Sherod’s house and we spent some portions of most of the holidays at their house.  We would have Christmas dinner there but opened our presents the night before at home. We might have Tricked and Treated for Grandma’s candied corn balls and Milky Way bars or M&M’s: maybe we enjoyed an Easter Sunday with them after church or some illegal 4th of July fireworks we had purchased in the weeks before on a trip to Missouri, while Grandpa set off a few dynamite blasting caps under a Folger’s coffee can; but they were simple afternoon or evening gatherings that rarely lasted more than a few hours. But Thanksgiving was almost always a family gathering marathon and four-day delightful gastronomic festival of feast.

Although it seemed cavernous to me, Grandma and Grandpa’s house was small, just two bedrooms and a bath: a living room, kitchen and dining room. It would surprise me today to learn it was larger than 1,200 sq. feet. It might have been but I doubt it. Add to that small space, four families with children: Mom and Dad with their five kids, Uncle Bob and Aunt Sandra with their three, Auntie Mary with her two and Grandma and Grandpa with Mom’s younger brother and it’s quite a crew to jam into one small house for four days. Someone, probably Grandma said that the boys- me and my brother Howard, Uncle Gary and cousins Wade, Greg and Scott- had to go sleep in the barn down the way.

We didn’t look at it as ‘had to,’ we looked at as ‘get to.’ I mean, are you kidding? Who wants to be cooped up in the house all night with a bunch of stuffy grownups and little girls, where you had to behave and be quiet when there was a whole barn full of hay and mischief down the drive, across the road and half way out in the pasture where you couldn’t be heard if you were being shot out of a canon? And don’t think we didn’t think about it! We did, but nobody ever thought ahead of time to bring one. We didn’t have to be quiet- I’m sure the cows would have told us to shut up if they could- we didn’t have to go to sleep and we didn’t have to settle down and play nice. There were only two rules: stay out of the pond and no fires!

I don’t know why anybody ever worried about us getting into the pond. It gets damn cold in Bandon in late November and the creek water in the pond was cold enough to freeze a brass monkey! It’s no fun to go to bed wet and half frozen when you are likely to remain wet and half frozen all night. Nobody had to tell us to stay out of the pond and actually, it would have been better if they hadn’t. We would never have thought of it otherwise. Fire was a little trickier. As country boys, every one of us knew how to build and light a good stout fire but we also knew better than to try such a damn fool thing in a barn with lots and lots of dry hay and dust particulate. One wayward spark or careless match and the dry old barn would have gone up like a cartoon bottle-rocket. Actually, I think Grandpa told us no fires not because he was so afraid we would be stupid enough to light one, he knew we wouldn’t; I think he told us no fire just in case one of his errant progeny had managed to filch a cigarette and a book of matches and wanted to try smoking. We did think of that but we were more afraid of incurring Grandpa’s wrath and or that of our parents for burning the barn down than we were of roasting alive in a bucolic holiday funeral pyre. There were other worries with cigarettes; lung cancer, emphysema and heart disease to name a few, but what six year old thinks of those when there’s a loose and unguarded Chesterfield laying around? But we obeyed Grandpa and like I said, not so much because we feared dying but rather what would happen to us if we lived! Face it, if you’re dead, roasted, diseased or otherwise, you’re dead but if you manage to survive then they can keep on killing you for the rest of your life!

The barn was cold, large and hollow: dark, dry and dusty and filled with hay bales to feed the cattle. Grandpa told Uncle Gary,

“Break two or three bales to keep warm but don’t break too many and watch out for the boys.”

We started out by breaking the requisite two or three bales but inevitably more got broken than Grandpa probably wanted.  We needed enough not only to stay warm but each kid had to have enough for a fort and when you are high in the hay bales of a dark, dry and dusty, cold old barn, you have to have a fort! And then of course, you had to defend your fort against unwelcome intruders, like your brother or your cousins or your uncle! That just naturally led to a good old fashioned ‘King of the Mountain’ sparring and wrestling contest that, well… broke more bales of hay than Grandpa wanted. The game didn’t end until you got tired or someone got hurt. And yes, someone always got hurt, though never seriously.

Uncle Gary was usually the King of the Mountain because he was the oldest and the biggest. He would perch himself atop the bales and the rest of us would scramble madly up trying to throw him down. He would stave us bravely off, one after the other and throw us back down the haystack. Hay bales, even from the dizzying height of the old barn rafters are considerably softer and more yielding than say, the floor.

Understandably, the two-by-six planking on the floor didn’t have very much give in it at all. You tried, as much as possible, after being thrown down the haystack by Uncle Gary, the King of the Mountain, to land on the surrounding bales and not the floor but inevitably, there would come a disturbing hollow thud from the stolid darkness followed by some muffled whimpering that meant the game had gone too far, got too rough and someone would have a shiner, a fat lip or a goose-egg on the noggin come the light of day that would require some explanation or a well crafted lie to one or other of the Moms and Dads.

What we called a bump on the head in those days would probably easily register on the Richter Scale of concussive trauma today, but we didn’t know about any of that and wouldn’t have cared if we did, besides, what’s a little ringing in your ears and a few days of blurred vision when you can have Uncle Gary throw you down the haystack? It was no contest! Getting thrown down the haystack was huge fun and getting thrown down by Uncle Gary was the coveted badge of favoritism and courage! Are you kidding? Who was going to pass that up? And if you hit the floor? Oh, well… we all knew the floor was down there, lurking like evil hardpan in the uncertain darkness and we all tried to avoid hitting it but since none of us could fly…

I just re-read that last paragraph and you’re right, it doesn’t make sense, but it doesn’t have to because it made perfect sense to me at the time and I guess you’re just going to have to trust me… because if you weren’t there, you’ll probably never understand but I was there and the logic of it all is as flawless to me today as it was then. And you know what? If I could, I’d go back tomorrow because getting thrown down the hay bales by my Uncle Gary, sleeping in the cold and drafty barn; Grandma and Grandpa Sherod, my cousins, my brother and all the family; the pond that was too cold to play in and the cigarettes we stole and smoked in every corner of the pasture and out buildings but never in the barn- that’s Thanksgiving to me.

I never knew Grandma Sherod very well. Yes, she was my grandmother and I was a familiar in her home for many years but I never got to know much about her beyond her title and the generosity of her dinner table. She was a hard woman, raised by hard people, in a hard place and in a hard time. That says more about stifling poverty, the depression, Bandon and America in the sixties then than it speaks ill of Grandma. I am grateful to her and Grandpa, to my uncles and cousins for giving me the simple gift of my favorite holiday: Thanksgiving Day. Without them, without Grandma there would be nothing for me to remember and enjoy. It is not ironic nor, oddly appropriate but rather and simply, plainly appropriate that the holiday I am most thankful for is a day of thanks, a celebration of thanksgiving and I am forever grateful, thankful to Grandma Sherod for my love of Thanksgiving and for the many cherished memories it carries.

Happy Thanksgiving to you all.