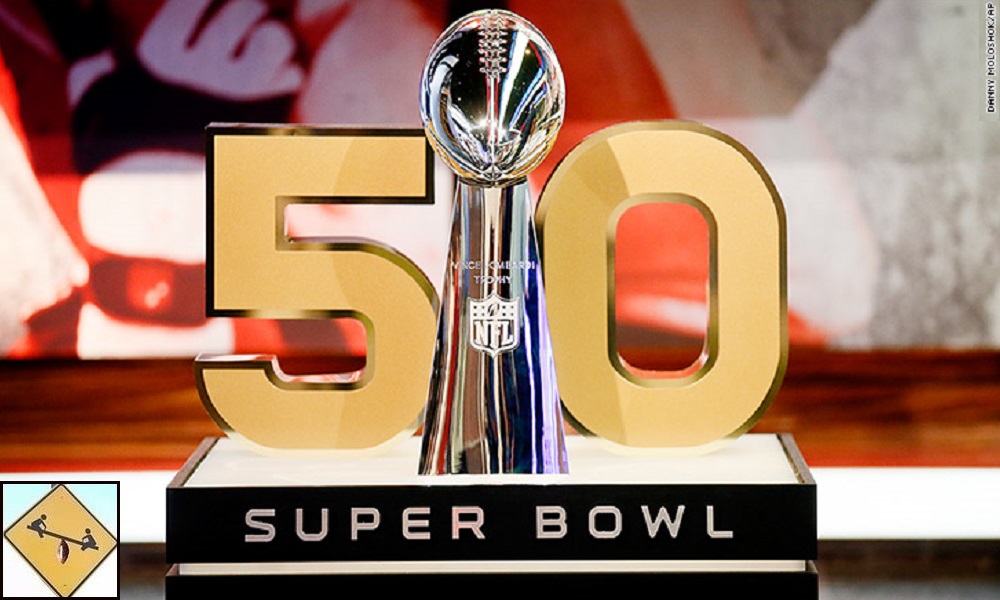 There are 100’s of Super Bowl 50 Prop Bets and they are Freaking Weird! We pick the strangest wagers with the best odds. Win money on the big game and enjoy the shenanigans.

It’s nearly time for the Carolina Panthers and Denver Broncos to take the field for Super Bowl 50. The Panthers came out of nowhere to dominate the NFC this season on their way to this game. Denver, meanwhile, had a roller coaster of a season itself, at different times being heavy favorites to being after thoughts to reaching the big game after all.

But none of this matters. What really matters, what really gets the people going, is Super Bowl gambling; namely, picking awesome, silly and ridiculous Super Bowl prop bets.

Everything is up for wager when it comes to the Super Bowl. Have a strong feeling on that opening coin toss? Feeling tails big time? You can bet it. Really like the idea of red Gatorade being dumped on the winning coach? You can get odds for that. Have a feeling the National Anthem will be sung quickly this year? Or have a big hunch on how many Omaha calls Peyton Manning will make? It’s all on the board.

But all that junk is for amateurs. We want the good stuff. The NFL winner/presidential election winner parlays; the length of the first punt; the winner between shortest made field goal and how many points LeBron James scores in his NBA game that same day; the larger amount between Cam Newton touchdowns and Neymar goals in his Spanish La Liga soccer match.

Here’s a full list of all the proposition bets offered by the Westgate Super Book. Gimme the ones you love. Here is a snippet of what I’m targeting for Super Bowl Sunday.

It seems ridiculous to start with a soccer wager, but this one really caught my eye.

I know the odds are low for Newton in this wager, but that’s because it seems like a no-brainer. Is there anyway Altidore scores more than twice? I can’t fathom him even reaching that. Meanwhile, there hardly seems like a feasible scenario in which Newton doesn’t at least push this wager.

This one seems like a layup as well. Denver has been awful on offense for much of the season, let alone in the playoffs. Peyton Manning has done nothing to aid his running game, but the reverse is also true. If not for a couple of long 30+ yard runs by C.J. Anderson, the rushing attack for Denver would be nonexistent this postseason. Anderson could certainly break one randomly against Carolina, but I would bet against that, meaning I would bet the Under on this.

Here are a couple more bets I like for the big game.

We’ve seen how hot Carolina comes out in these playoff games. They can collect more than a field goal in the first quarter.

Ted Ginn is not reliable; Greg Olsen will be smothered in this one. I like Brown to find the openings.

I could keep going because there are so many intriguing options, but I will let you take it from here.

Gambling can be a lot of fun, but these prop bets are freaking weird! I suppose the monotony of betting on winners or losers has caught up with most football fans by now, so all that’s left is to parlay other sports and oddities into the mix. Dollar bills y’all.

My favorite Super Bowl 50 prop bets begin with a doozy.

Okay, so I started with an actual winner/loser bet, but how can you not love a sweet payout like this one? This type of bet goes all the way up to Denver -17.5 or Panthers +17.5, but this right here is the sweet spot. If the Broncos win by more than a touchdown, then you cash out at +500 baby. If you like Denver in this game, then jump all over this prop bet.

It seemed like an extra point was missed in every other game this past season. That’s surely an exaggeration, but with the spot of the football moved back, lots of these chip shots were missed. Now its the Super Bowl and the pressure is as high as it gets. Someone is certainly shanking it at least once.

This is a fun one. If the Thunder were facing anyone other than the Warriors, this wouldn’t even be a bet. But Durant likely taps out at 30 points in this game. Golden State is that good at holding people in check. The question is, can Manning put up that many completions?

Peyton is getting an extra 6.5 completions, so in reality he only needs 23.5 to win the bet if Durant scores 30 points or less. I like those odds considering Denver’s current struggles to run the football.

You can bet this type of wager with a lot of different odds, but I’m a big fan of grabbing over 1.5 touchdown passes for Manning. I think projecting over two is a bit risky, but Peyton will get an even two scores through the air.

One bet I did not see on the list, but wish was available, is a celebration related wager. The Panthers are known for their hijinks, shenanigans, dancing and what have you after scoring touchdowns. Cam Newton specifically has made headlines for his enthusiasm, so I’d like to put some money on it. How many times will Cam Newton ‘Dab’ during Super Bowl 50? Will he do it after every Panthers’ score, or just the ones he orchestrates on offense? This is a dynamic bet, based on Panthers’ touchdowns and whether they fall to the offense or the defense. It also has everything to do with Newton’s state of mind at the time. I want this wager!

Dan Salem is Lead Editor, Staff Writer, and Featured Vlogger at BuzzChomp. He’s also a Staff Writer for NFL Spinzone, as well an Actor, Writer, Director and Producer. Get lost in his Youtube comedy channel PillowTalk TV.Follow him on Twitter, Facebook, Google+, or Instagram.