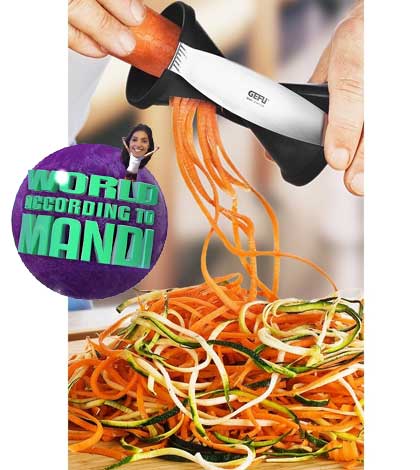 I saw the Gefu Spirelli Spiral Slicer on Pinterest last year and knew I wanted one. It hasn’t disappointed! This prep cook utensil looked wonderful in photos and all I could do was dream about using my own. A pic of wonderfully long Julienne strips of veggies had me hooked. I knew this little contraption would be perfect for spaghetti-like veggie pastas and my head was flooded with new recipes. Long story short, I finally bought one, love it, and had to share!

It’s only been a few short weeks since I got my slicer. I had some Crate and Barrel gift cards burning a hole in my pocket, and guess what popped up while online shopping? That’s right people, the Spirelli Spiral Slicer! I obviously got excited, reminded my man that I’d been dying for this device for so long, and that was that! After several days anxiously awaiting the arrival of my new kitchen toy, I had my spiral slicer. SCORE!

My goal was to make vegetables into spaghetti like pasta with my new slicer. This little guy did not disappoint! I briefly read the directions, which were really no directions at all, and decided carrots were the way to go. I’d bought a large bag of colorful organic carrots from Whole Foods for making veggie spaghetti. First thing I learned while using the slicer, you need to put the carrot (or whatever firm vegetable you’re using) straight down into the cutter and just start twisting. After only a twist or two the spiraled carrots began coming out of the sides in long wonderful Julienne strips. The slicer then discarded a core like leftover of the carrot, a wonderful snack for my man. The tip end didn’t make it through the slicer, so I chopped it up and added it to the mixture topping my cooked carrot spaghetti. That’s it people! It was that simple. It took me a moment to get the hang of the slicer, but once I did it was effortless and fluid!

With my Gefu Spirelli Spiral Slicer I made some amazing vegetable spaghetti. For the meal, I decided to light boil the carrot pasta. While that was going I cooked up a bag of frozen butternut squash and added to it about a ¼ of a cup of frozen Soycatash vegetable mixture. I decided that the ‘pasta’ and veggies needed an avocado crème sauce on top. Yum! In a sauce pan I sautéed chopped avocado with a little olive oil, and once it started to brown I added in a cup of unsweetened almond milk and hot sauce. I let it get to a simmer and then added a Laughing Cow Swiss cheese wedge, about a ¼ of a cup of Fage Greek yogurt, and just a dash of parmesan cheese. Boy did it smell delicious while cooking. The avocado crème sauce started to thicken nicely and the carrot pasta took no time to soften. After the ‘pasta’ was strained and dried I added the butternut squash mixture on top and then the avocado crème. This was DELISH people, delicious, and it was all due to my amazing spiral slicer!

The Gefu Spirelli Spiral Slicer is now a staple in my kitchen! I’m psyched to try it out with cucumbers and top it on salad. I’d love to try it with squash and carrots, using them as a base for more delicious vegetable pasta. It will also help make my cooking presentation much more creative! I love how easy the slicer is to use, and hopefully I’ve inspired you to get one and try making your own delish vegetable pasta. Try out my recipe and let me know what you think. It was so easy to make and it took me only thirty minutes. Score on both fronts! Enjoy people!