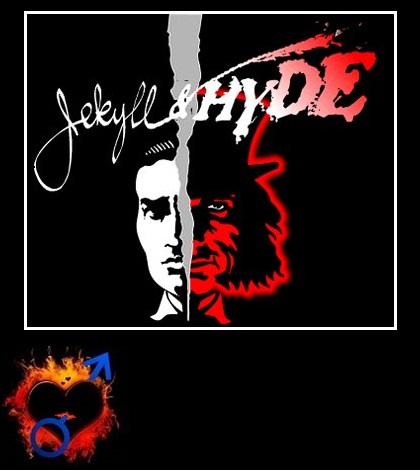 If you never read Jekyll and Hyde, it’s basically a story about the duality of man. Man is not one but two, he is evil and good. He walks a fine line we’d all cross if we could.

I normally write about relationships and sports, but that’s just because the subject matter comes easy. Yes, feel free to call me arrogant. With that being said, they are easy subjects because when you break down both areas, there is always Thing A colliding with Thing B. How they interact and who gets the upper hand is entirely based upon what and how it happens. There is always a moment when you know how things will pan out.

When it comes to internal issues and self-problems, the answer isn’t always as easy. In fact, it’s much more difficult because no one in today’s world wants to blame their issues or problems on themselves. It takes a strong person to admit they have an issue and take the proper steps to deal with it.

I bring this up because I received an e-mail from a friend recently who is going through some problems. Basically, girls are not lining up for him and he has had enough. Not enough to do what that psycho at UCSB did, but enough to cause a disturbance in the force.

Is there a better example of the duality of man? If you suggest Spiderman and Venom, please hit yourself.

I’m not the person to ask about pep talks and re-assurances. I’m naturally a negative person who always thinks of the worst case scenario. That’s just how I have always been. Ask anyone who has known me from 2008 – present and they’ll tell you I am not a fan of the Me Club. I’ve used the term “life fail” to describe myself to people at bars. As you can imagine, this made me quite popular.

This isn’t meant to be a rant about how you should always be positive and read the Bible. Those are things I do not preach. What I will say is this; I have learned two things in the recent past that have changed my outlook on life. I just forget from time to time.

You will always have moments in your life that will challenge you, that are far greater than your abilities. It will be easy to pack it up, take your ball and go home. That’s not the right way to handle it. You should realize special moments and rise to the occasion. The best sports comparison is the 1980 US Men’s Olympic hockey team. College kids faced the best hockey team ever assembled in the USSR. As a team they rose to the challenge. They decided to define the moment. Every one of them needed to play the game of their life and they all did. They had no other choice. They all knew it was a historical moment and something they would never be able to duplicate again. It was the only time they could play for a gold medal, and they made the most of it. By defining the moment.

One of the greatest photos of the 20th Century. Do you feel that? It’s called pride.

An old story goes that man contains two wolves inside of him. One wolf is good and the other is evil. There is always a struggle between the two wolves. When asked which one wins, the answer is simple, “the one you feed.”

For those of you who think the WWE is real, allow me to reiterate. If you constantly bring up the things that suck about your life or yourself, evil wolf is going to come out and kill the good wolf. If you train and help the good wolf, that is the one which will take over.

Without contradicting myself, just think of it like this. Who do you want to hang out with at a bar? Who would you rather get stuck in an elevator with? Is it the dude who hates everything and is pessimistic to the point of stupidity, or the dude who everyone seems to want to be around? The one who attracts a crowd just by his presence? The one who you feel enter a room before he actually does? If you chose the first guy, you’re wrong.

I moved to Los Angeles from Boston in 2008 to pursue writing and TV/film production. While I was able to work in promotions for various companies and even work on a few TV shows, it didn’t go as well as I’d hoped. I never worked with the same producer twice because they always wanted someone else. I learned the hard way, and didn’t realize this until years later, but personality and attitude mean just as much as work performance. So even though I had the work ethic and skills to succeed, did anyone want to work with someone who hated life? Yeah, not so much, as it turns out.

So what changed? What made me go from a self-described life fail to the slightly arrogant, yet hilarious person you’re reading? My old man always told me stupidity is doing the same thing over and over and expecting different results. So I went for it and did something completely different.

To fix things I joined the US Army. It was just something I always wanted to do, so I did it. To really embrace the different card, I chose to be a medic. It’s the complete opposite of writing and production, and for good reason. One is English and one is Science… duh.

To make a long story short, it benefited me tremendously. The things I was able to do and accomplish brought me much-needed self-confidence. I will not list them all here, but that’s just because I want some other stories to write about for later. Make no mistake about it, being a line medic for the 82nd Airborne has provided some great stories. There is no way to jump from a perfectly good airplane and not think highly of yourself afterwards.

That is confidence falling from the sky. That and a potential ass kicking.

With self-confidence and finally liking myself, what also changed was the way in which I dealt with women. Beforehand, the quality I used to love in women was their interest in me. Now I know I’m awesome and that’s not to say I didn’t appreciate the women I dated in my life. I did. But now I know what I am looking for.

As cliché as this sounds, there is something to be said about Army wives. For the most part, they not only understand their husband’s job, but they embrace their husband’s single friends and help them as well. I’ve never left an Army wife thinking “wow, that girl sucked.” It’s always more of an envious way, like that’s the kind of girl I need to find for myself.

For the record, I have never seen an Army wife in full body mulitcam paint.

Not only wives, but the actual female soldiers I’ve been fortunate enough to work with are amazing. Yes, a majority of the ones I know have mouths that make most normal men blush, but that’s part of their charm, right? It’s endearing to see a woman’s use of derogatory words rival that of their male counterparts. Swearing aside, the ones I am friends with are more caring and loving than I could ever hope for. They’ve always been there for me when I needed them, which is saying something for myself. I’ve always had people I’ve been close with in my life, but few when I first moved to North Carolina. I can say with confidence what qualities a good woman should have. If for no other reason than I’ve now seen it first hand.

I’m 99.9% certain this uniform is no longer authorized to wear.

I guess what I want to say is simple. If you’re not happy with something in your life, change it and do something completely different. You may be happy you did when it’s all said and done. At the very least, you’ll end up with some great stories about doing what you wanted to do.