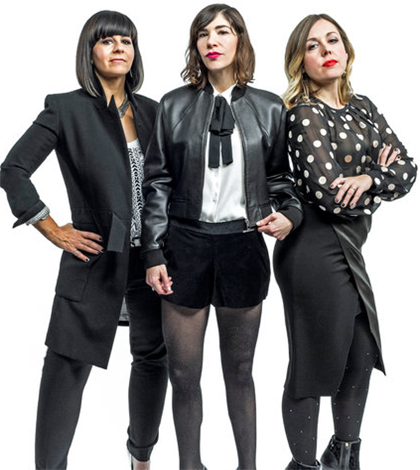 Sleater-Kinney made a triumphant return to the music scene earlier this year with No Cities To Love. A good punk band with a fantastic lead female vocalist is always one of my guiltiest of pleasures. I originally discovered this band some years ago, while I was still musically inexperienced and widening my tastes. I remember Ellen Page, an actress whom I absolutely adore, mentioning a Sleater-Kinney song in her playlist for those old Celebrity iTunes Playlists they used to do – I don’t even know if they still do them. But the song she picked was “Entertain,” a particularly aggressive, adrenaline fueled track that I grew to love the more I listened to it.

I then did the normal thing, which is to go back and sift through all of their older albums. I really grew to like the band and their whole sound. I was just upset that they’d broken up at the time, and I wouldn’t be hearing anymore new music from them. But in January of this year, I was pleasantly surprised to hear that Sleater-Kinney was going to release a new record, their first project in 10 years.

Sleater-Kinney formed in Olympia, Washington, way back in 1994. Corin Tucker, lead vocals and guitar, Carrie Brownstein, guitar and vocals, and Janet Weiss, the drummer, make up the group. They’ve been widely regarded as an integral component to the riot grrrl and indie rock scenes in their area (Oregon, Washington, etc). The ladies are also known for their feminist and left-leaning politics, and that signature voice makes itself known on No Cities To Love.

One thing I really love and admire about Sleater-Kinney, other than the fact that they are three talented women who make raw, authentic, punk-rock music, is that they are intelligent and often political in their music. Some may classify their sound as “indie” or just rock, or place it in the “riot grrrl” category, but it feels so punk rock to me. Their punk rock sound is undeniable to anyone who actually listens.

The first track on the project is “Price Tag”, which very much employs that punk rock tone, while also being a song about a minimum-wage mother having a hard time dealing with America’s current economy. “The bells go off the buzzer coughs/The traffic starts to buzz, the clothes are stiff, the fabrics itch, the fit’s a little rough but I suck it in“. They’re still able to craft rough-yet-catchy, jagged guitar riffs, and addictive hooks throughout the album.

Tucker’s vocals are as amazing and passionate as ever. Her voice is a thunderous earthquake. “Fangless” features some pretty sick grooves and guitar work, with a great tempo during the bridge, and Weiss is great on the drums. After the 2nd chorus, it’s also got a fantastic baseline and break. “Surface Envy” displays some pretty incendiary guitar riffs and chord progression, as well as being the standout rebellious, anthem-song on the album. It accomplishes just that and gets right to the point, as does every song on this album. Solid musicianship, great hooks, and good lyrical content from Sleater-Kinney.


Stephen Jordan is Editor In Chief for Swurv Radio (www.smj12.com). He’s also a freelance writer, screenwriter, and storyteller for hire.

Music to live by from Sleater-Kinney. Woo!