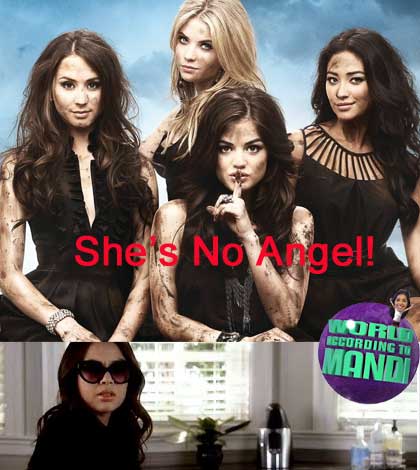 Charles is definitely dead. I for sure thought they were playing with us on that one. BUT just because he’s dead doesn’t mean people still don’t hate Ali and now could a group of these individuals banded together?

Mona’s friend Leslie Stone is back and pissed at Mona for faking her death! Mona’s a manipulative bitch and Hannah comes to the rescue! Score for Hannah. Hannah and a high Spencer band together and break into Radley only to find out Charles is REALLY dead and Mona was trying to steal Leslie Stone’s file from Radley. YEP! Leslie was in Radley with Charles and Bethany and with Mona! A band of CRAZY Ali haters is one massive A.

Mona is back to her old tricks of manipulating. She’s already got Hannah falling for it. Ugh! Can the Pll’s outsmart her this time?

Bummed we have to wait until July 14th for another episode!

Happy Fangirl Friday! Is Mona A?