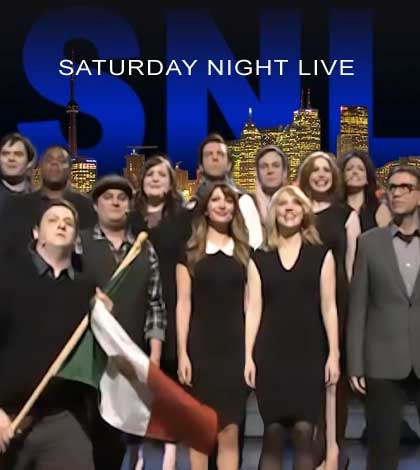 I hear a lot of complaints about Saturday Night Live from friends who know I am a lifelong fan. “It’s not funny anymore.” “The sketches are soooo long.” “The show hasn’t been good since ________* left the show!”

*[insert either “John Belushi”, “Dana Carvey”, “Adam Sandler”, or “Will Ferrell”, depending on the age of the person complaining]

I get it.  I’ve been there. I’ve ranted and raved about how flawed and disappointing some episodes have been.  I’ve posted my 5 Ways to Fix SNL.  But there’s never been a simple way to fix such a complicated television program.

I have the ultimate Rich Fix for Saturday Night Live.  One major change that, when implemented, solves all of the faults of the show.

But it’s not something to be implemented by the writers or the cast of the show. The Fix is for us, the audience.

For years, when I used to watch SNL, I thought of the show as a finished product like a book or DVD.  My attitude was “This is a comedy program.  I expect each sketch to make me laugh.  Why else would I watch?”  The show rarely lived up to my expectation.

That all changed for me during the Channing Tatum episode last February.  The last sketch featured Jason Sudekis as the MC of a rundown strip club.  “Bongo’s Clown Room.”  The sketch was terrrrrrrrrible.  It was awkward and hard to watch.  A total miss.  But before fast forwarding, I noticed something curious about Jason Sudekis.  He had slowed down and got more deliberate, almost as if he enjoyed bombing.  Sudeikis clearly knew this sketch was going to be put in the loss column, but instead of racing through it, dug even deeper, and worked harder.  This shifted my perception of SNL.   Suddenly, I wasn’t thinking of the sketch as a finished product anymore.  Instead, I was in the moment with the live audience, rooting and cheering for a major league slugger, behind in the count, who refused to give up.  I started to laugh, even though the sketch didn’t get any funnier.

This was the perfect Rich Fix.  I had changed my attitude.  Now, I consider the cast and crew of SNL players on my favorite sports team.  They kill themselves in practice all week, and I tune in to see the big game played every Saturday night at 11:30pm.  I watch to see my team, led by head coach Lorne Michaels, hit the field of Studio 8H.

I get invigorated by the energy of a performer yelling “Live from New York, it’s Saturday Night!” Even though I’m watching the west coast tape delay or on the DVR Sunday morning, that phrase teleports me through time and space to the live performance in New York City.  Like a baseball or a football game, the future is uncertain.  Will this episode be a huge victory, or a series of pop flies and strike outs?  I don’t know.  The writers don’t know.  The performers don’t know.  Lorne doesn’t know.  We are all going to find out together.

Does this team hit a homerun every inning? Of course not.  Do they win every game?  Unfortunately, no.  But here’s the thing – if a baseball or football team won every game, then the joy of watching that team win would be watered down.  It would take the adrenaline out of the experience.  Without risk, we can’t really enjoy the reward.  I embrace the losses of team SNL because I know it’s going to make the next win all the sweeter.

This feeling of hope, this investment in my team, is not something I get from any other show on television.  With my Rich Fix, SNL is perfect.  Not the individual sketches, or even individual shows, but the experience of Saturday Night Live.  The next time you watch SNL, try my Rich Fix.  Instead of sitting back and evaluating the show, buy a ticket to the game. Put on an SNL jersey and start cheering with me for our team.  The home team.  The world champions.  Let’s get ready to play some ball! We have a great show.  Stick around, we’ll be right back!