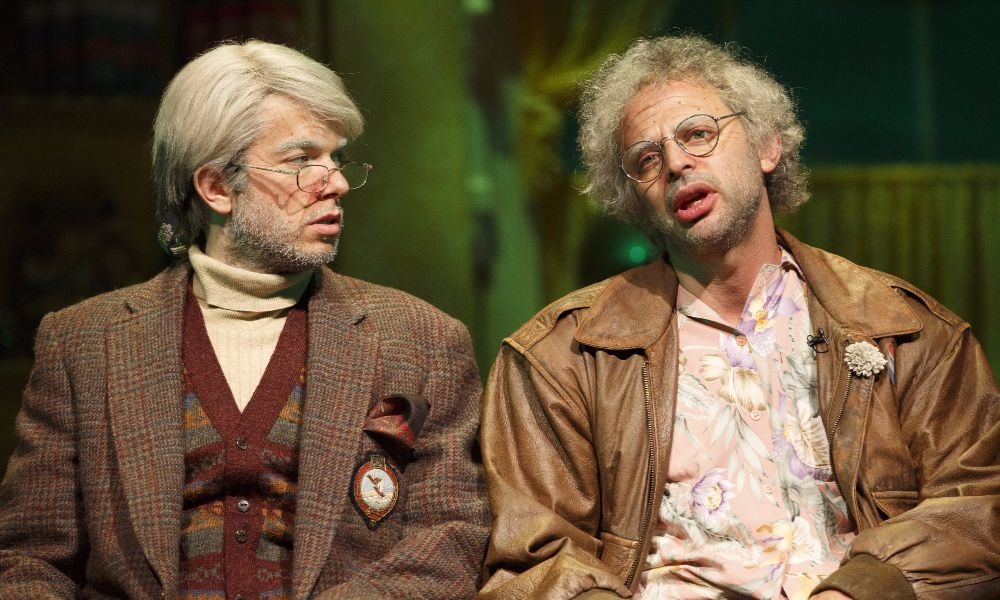 Broadway plays don’t normally translate to the silver or small screen well. In Netflix’s “Oh, Hello on Broadway” I’m still not sure it worked. I just know it was funny.

Oh, Hello on Broadway is a movie filming of a play based on a skit from a television show. John Mulaney and Nick Kroll play George St. Geegland and Gil Faizon, who play different people named George and Gil. The play within a play sees the latter George and Gil constantly breaking character, though John and Nick never do. It’s a wild and occasionally baffling ride that is surely amazing to see in person. On television, it remains wacky and funny and worth a viewing.

George and Gil have lived together for 40 years, but their rent-controlled apartment (for which they pay $75 a month) is no longer going to be rent-controlled. They will owe $2,500 per month and neither one has any money!

The pair end up bringing their prank talk show “Too Much Tuna” to New York in order to be able to pay the rent. But on the way, there is raccoon sex, a dance break, an interview with Steve Martin, Matthew Broderick hidden just off-stage, one character going number two in his pants, another quitting the play within the play, and everything else you can imagine. Oh, Hello on Broadway touches all genres in one way or another.

Throughout, Mulaney and Kroll break the fourth wall by addressing (and even entering) the audience, though they never break the… fifth wall (?) by leaving the characters of St. Geeglan and Faizon. This remains true through laugh breaks, skits within skits, and a complete emotional blowup. Nothing about the show is real, yet everything about the play is.

Mulaney and Kroll are both hilarious comedians with stand-up, sitcom, and sketch show experience. Each has had his own television show with his name in the title. Mulaney wrote for Saturday Night Live for years. Kroll may be best known for starring on the FX comedy, The League. Whatever they have done, though, Oh, Hello now feels like the biggest thing on their respective resumes. It is a legitimate Broadway hit, as evidenced by its journey to Netflix in the first place. Realizing that the characters essentially started as nothing more than individual members of a skit from Nick’s Comedy Central show, Kroll Show, is amazing. The entire premise was these two old men sit down to interview famous people, but they “prank” the unsuspecting celebrities by bringing them tuna fish sandwiches with far too much tuna. From that to Broadway stars is a journey that is hard to explain.