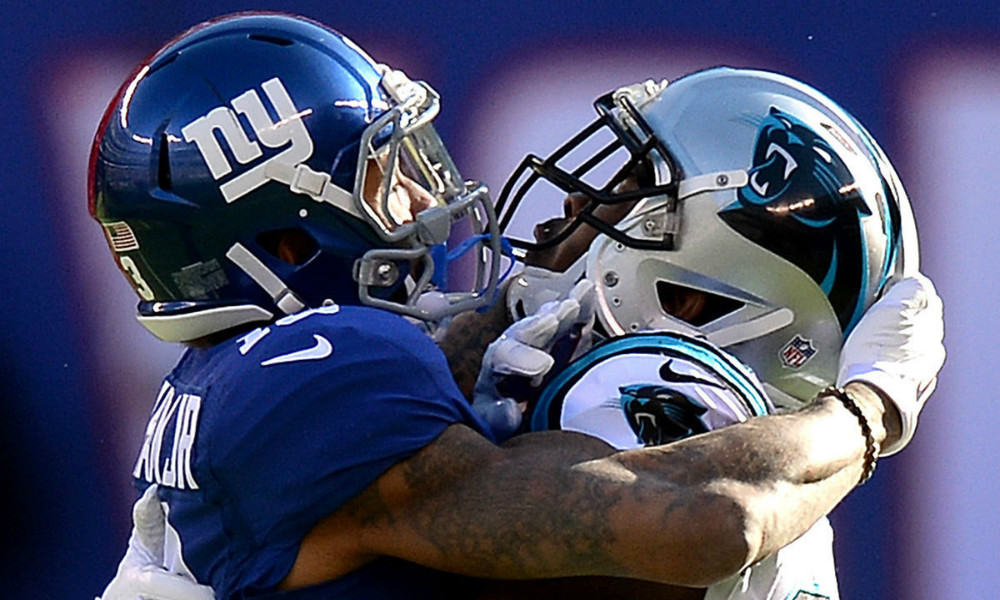 It was a spectacle the last time Odell Beckham‘s team faced off against Josh Norman‘s team. With Norman’s move from Carolina to Washington, said matchup will take place twice a year, and neither player is forgetting the opening battle. The talking continues, which breathes life into what should be a whole heck of a lot more fun. (Photo Credit: latimes.com)

Just when I thought we had reached the end of the Odell Beckham Jr./Josh Norman beef, it was kicked up another level. OBJ went full Kanye on Norman, saying the only reason Norman was famous was because of him. “The reason he’s become so relevant is because of me,” Beckham said in an interview.

As with Taylor Swift, I’m not sure many outside of Beckham would agree with his sentiments. Norman was arguably the best cornerback in football last year. Part of the draw of the matchup between him and Beckham was the one-on-one nature of pitting two of the sport’s best across the line of scrimmage from each other. Norman went on to make the Pro Bowl and later received a sparkling new contract from the Washington Redskins. Beckham is even taking credit for that!

ALSO ON BUZZCHOMP: Universal Studios Goes Old-School into the Multiverse

Whether OBJ does indeed not look for such attention is up for debate. What isn’t is the future of this rivalry. Norman fired back with his belief that Beckham is just relevant because of one catch. It’s an equally as extreme and false argument as what the first quote said. It also adds just as much fun.

The first battle between these two titans last season melded into a farce, a borderline travesty of football proportions. It was embarrassing for both parties, specifically Beckham during the game, but perhaps just as embarrassing for Norman and Carolina for what was supposedly said prior to the game taking place. That game was not necessarily fun to watch or enjoyable, because of how the rivalry degenerated the action on the field into a sideshow. However, the fact that it happened was incredible for what it now entails moving forward.

I would be surprised if any of the future Giants – Redskins games turn into what that was in 2015. But both 2016 matchups between New York and Washington should be beyond exciting, because Beckham and Norman will continue to line up across from one another. They will also continue to talk and continue to perform at a high level. These are great football players and we don’t have enough rivalries between such forces in the league today. This might just be the best NFL rivalry we now have. Up until this season the best thing we had was Peyton Manning versus Tom Brady, yet that’s now over and even when it did exist, the two players were never even on the field together. This is the best of both worlds. This is the ultimate.

More Sports: New York Yankees, To Win or Not To Win