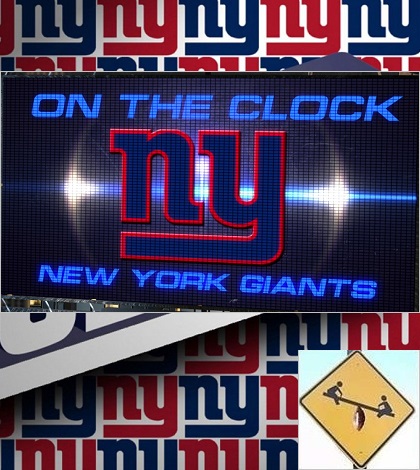 The New York Football Giants had a season from hell in 2013. Although they finished with seven wins, a respectable figure considering, the season never felt like anything after an 0-6 start. Eli Manning was very bad; the offensive line and running game were worse. And on defense, things fell apart at every level.

To start the offseason, New York was active, filling holes with small signings all over the place. They added offensive linemen, a number of defensive backs, return game help, a new starting running back and more. The draft is the last step to a successful offseason and getting the Giants back into the playoff fold. With recent poor drafts by GM Jerry Reese and company, the 2014 version is even more important, in order to build depth throughout the organization as well as nab a few starters for the coming year.

The first pick the Giants have to play with is 12th overall. After that, they have just their one pick every round to the fifth, where they grabbed an extra, compensatory selection. Picking near the front third of every round, it will be paramount that NY come away with a couple of starters.

Of course, need isn’t the only thing that comes into play when making a selection. There must be a player deserving of the pick, and someone the team wants. Even if the Giants really want an offensive tackle at 12, if the top few guys are selected ahead of them, it makes no sense to reach for someone. And even if linebacker is shallow on the roster, NY is known for filling the position with scrubs and attempting to cover that up with strong play up front and in the backfield.

In past seasons, this team has always drafted someone they felt was the best player available, regardless of position. That ideology led to the defensive front four strength that powered NY to two Super Bowls. Now that the cupboard is more bare, it shouldn’t necessarily change the team’s mindset. In fact, with a less talented roster, it may be even more important to simply take the best player available, even if the position doesn’t perfectly align with a need.

This is the long way of saying that the Giants have myriad of options. I’m hoping they address their five need areas with their first five selections…or just grab the five best players and make it work later!

If they Giants want any hope of making the playoffs in 2014 they will need to protect Eli Manning. He’s shown the ability to be great, but as you noted, he was awful last year under pressure. He has zero ability to scramble and his backups are not players you want in the game. The Giants pick just high enough that they can’t simply draft for need, but grabbing the best player available with the 12th pick comes with its own set of problems.

Lucky for New York, they have several big areas of need as you noted and at least five players worthy of their twelfth pick. Personally I’d draft an offensive lineman or tight end before taking a linebacker, but it all depends on who is still on the board after the first eleven picks are in. Some of these players will be gone for sure, but whomever is left will be wearing big blue.

Jadeveon Clowney and Khalil Mack will almost certainly be gone when the Giants are on the clock. But if one should fall, the Giants should pounce. I expect one of the above five players to be available to New York and would bank on an offensive lineman. But if all five men are gone, I would take wide receiver Mike Evans out of Texas A&M. This is more along the lines of best available, but Eli Manning can’t have too many weapons. Frankly he needs a lot more. Its amazing how quickly a team’s weaknesses disappear when a quarterback is connecting for twenty yard passes down the field, play after play.

As the draft progresses the Giants need to keep their division rivals in mind. Its not enough to simply fill their holes. The Eagles play at a very fast pace and both the Redskins and Cowboys have dynamic quarterbacks who also try to ramp up the pace of the game. And let’s not forget the power rushers leading Philadelphia and Washington. The Giants need to grab guys who can play fast and run down the speedy weapons of their NFC East rivals.

I think a change in philosophy is coming in New York. They have been a grind it out team for quite some time, playing to Eli Manning’s strengths. They were defensive bullies who won a lot of close games. I don’t see this brand of football winning the NFC East. Not when your opponents are gearing up to be the opposite. This draft will be telling. Can the Giants both grow and compete, or do they simply take talent for the future?