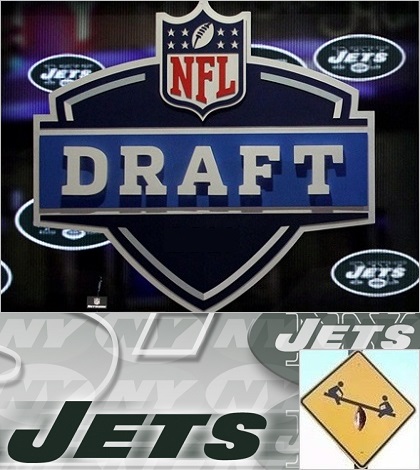 Both the New York Jets and New York Giants are dear to our hearts and neither team played past week seventeen last season. The NFL is all about hope and both our New York squads have a lot of it riding into 2014. The NFL Draft will play no small part, so I’ll get thing started by tackling the Jets. They have a lot of picks to play with and several key holes to fill. I see playoffs in the Jets’ future and this is where it all begins.

The Jets have the 18th pick in Round one, followed by the 49th overall pick (round two), the 80th (round three), 104th, 115th, 137th (three picks in round four), 154th (round five), 195th, 209th, 210th, 213th (four picks in round six), and the 233rd pick (round seven). That’s twelve total picks, which screams trade to me. Will they go the route of Bill Belichick and trade their sixth round picks for higher picks next season? Or will they trade up in the first round to snatch a game changing player? All of the above.

The Jets two primary needs are at Wide Receiver and Cornerback. Sammy Watkins out of Clemson and Mike Evans from Texas A&M are the top two receivers on the big board. The Jets would be lucky to see one of them fall to them at pick eighteen and won’t wait past pick number ten to grab whomever is still available. They need a number one receiver and have the picks to trade up for their man. I personally like Watkins out of Clemson, yet Evans has experience playing for a running quarterback with Manziel. As a fan, I’d be happy with either.

Next the Jets have to go cornerback, they have to. I want their followup pick in round two to fill this need. I have a feeling the top two or three guys will be gone by pick 49, but how strongly do you feel about your alma mater’s own Kyle Fuller? Virginia Tech has been known to produce solid pro players and the Jets have a huge need at corner. Kyle, welcome to New York.

What other holes do the Jets need to fill? Do they use their late round picks or keep wheeling and dealing?

Twelve picks is a ton. It’s so many in fact that your team wouldn’t even be able to make that many selections if this were a Madden video game! The folks at EA used to limit a team to ten draft picks for some reason. Anyway, twelve is too many players to add, so I agree that a trade seems likely. Three round-four picks is where your value will be derived. Those are nice sweeteners for moving up in round two or even back into round one. I am skeptical though that the Jets would be able to move their way up into the top 10 of the first round. It costs too much to move that far.

Watkins and Evans will both certainly be gone by pick eighteen. However, don’t fret. This is perhaps the best wide receiver draft of this century. Mel Kiper over at ESPN projected EIGHT wide receivers to go in the first round of his most recent mock draft. That is an insane number. And while Watkins and Evans are the elite of the bunch, I personally am very high on two others: Marqise Lee and Kelvin Benjamin. Both may be available at eighteen, and the Jets could do a lot worse than either one.

As for the defensive backfield, grabbing Kyle Fuller in round two is a pipe dream. His stock has risen to where some mocks have him as the first or second corner off the board. Most others have him squarely in the first round. New York would have to trade up in order to draft Fuller. But your Jets luck out again. There are a number of great second-day options at corner. Players like Loucheiz Purifoy and LaMarcus Joyner were first rounders after the college season ended, but neither one is anywhere close to projected first-round status anymore. Their stock drop is the gain of a team like New York. There will be a talented DB at pick 49. It just won’t be Fuller.

After that, the late second round is an ideal spot for New York to jump back in and grab a third game-changing player. With four selections between picks 80 and 137, the Jets should be able to move up twenty spots or so into the 60s and build on their strengths.