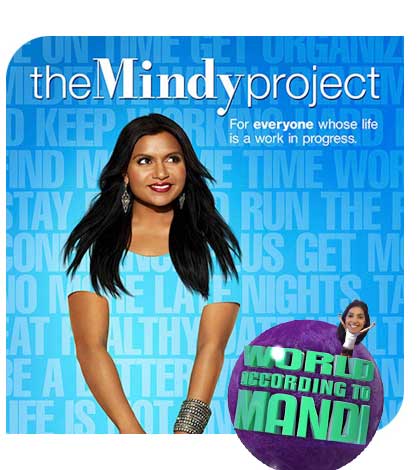 I take my television viewing extremely serious.  I have my favorite TV shows, but if the writing and storyline go south, I have no problem saying goodbye. You’re done! Especially in this day and age with so many great scripted television series, why watch a subpar show? Speaking of excellent TV, I’m totally digging on The Mindy Project. It’s definitely one of my favorite shows! And did you watch the mid season cliffhanger? Wow.

The Mindy Project has completely stepped up its game! This Fox comedy is on its third season and if you have yet to watch it, please do yourself a favor and binge watch this bad girl! Mindy Kaling is the lead and the creator of the show.  Soooo funny. You might remember her as Kelly Kapoor from The Office.  Let me tell you, at first I wasn’t sure she could carry a show, but damn this woman totally can! She’s funny, confident, and owns herself and her image.  A pretty damn good role model if you ask me. She’s always honest with herself and hasn’t conformed to the social norm of being a gaunt, skinny actress. She’s got curves and she flaunts them. Mindy’s not changing and I love that about her.  Here! Here! A toast to a strong independent woman, carrying a comedy on her shoulders!

The absolute best part of The Mindy Project is Mindy’s relationship with her fellow doctor, Danny Castellano.  Over the first few seasons they became friends, but it’s always been evident that there was an attraction between them with a Ross and Rachel vibe of ‘will they or won’t they.’ The comedic twist was Danny’s blatant infatuation. He was completely vibing on Mindy.  He’d look at her in this amazing way, but then stand by her as just her friend.  You can’t help but route for them, even if Mindy always seems to have a boyfriend!

The most recent episode, The Desert, was my absolute favorite of the whole series.  Spoiler alert; Danny traps Mindy into going and visiting his father instead of taking her to the airport to reconcile with her boyfriend of the day. Ultimately Mindy helps Danny come to terms and forgive his dad.  Even bigger spoiler; the ending was the best two minutes of television so far in 2014! Mindy and Danny are on a plane flying back to NYC and Mindy goes to get him a soda. The plane has some serious turbulence which spooks the crap out of Danny. He has this look of ‘Hell no, I’m not waiting any longer” determination on his face and gets up to find Mindy. He finds her, scoops her up and they passionately kiss. YES! They kissed! It finally happened, but Mindy was also trying to get back with her ex-boyfriend, Cliff, who stupidly dumped her.  What is going to happen now?  Cliff wants Mindy back, but Danny and Mindy. Danny and Mindy!

Woo! I was so excited watching the episode; so excited.  THEN Fox and the show dropped a bomb. The Mindy Project is on hiatus until April. April! We have to wait until April to find out what happens. Hot damn! That’s just mean. It’s only January! But whoa, best cliffhanger ever!

Television should take notice.  The Mindy Project stepped up their game! I’ll be on the edge of my seat until April.  Mindy and Danny forever! I hope!