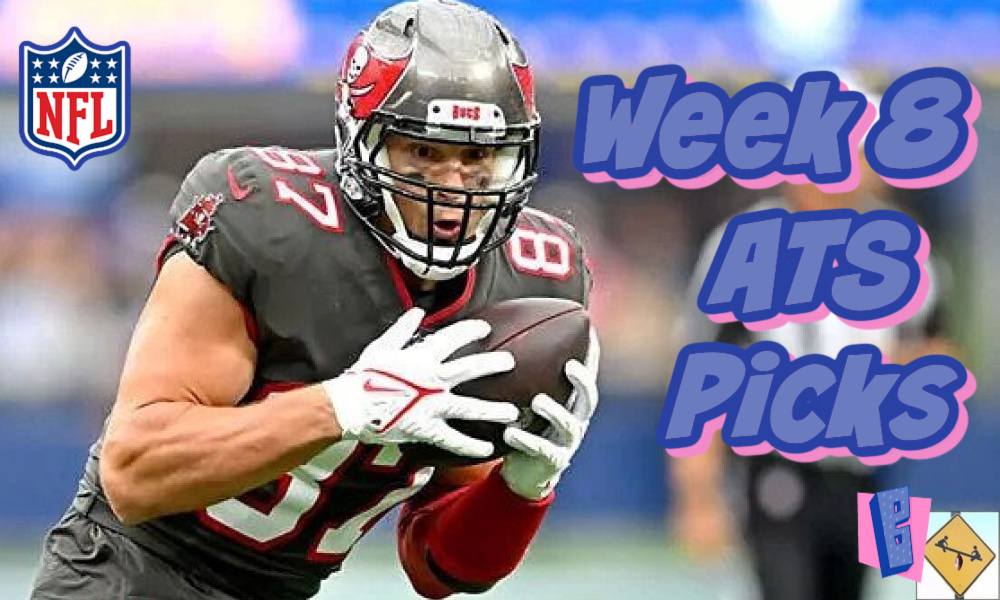 With a massive six teams on bye last week, blowouts ended up being the story for the teams that did take the field. Not every blowout went to the favorite though. Tennessee dismantled Kansas City; Cincinnati took it to Baltimore; even the New York Giants got in on the action. Them blowing anyone out is a huge surprise.

The standings are stratifying in the NFC but muddling in the AFC. Do we already have five playoff locks in the NFC entering NFL Week 8? It sure looks like it. That quintet, by the way, is 25-9 ATS. Meanwhile, in the other conference, there are…zero playoff locks right now? Some teams we feel pretty good about, but it’s amazing how the conferences have taken two opposite paths through seven weeks.

NFC favorites have been dominating, so where do we stand in NFL Week 8? With those favorites, including one exception in Chicago. Each week, Dan and Todd will select two games against the spread. NFL Week 8 is about the NFC and Tennessee. Todd and Dan are all over playoff teams this week, with four teams sure to cover.

One of those locked-in NFC teams I spoke of is Dallas. I may formulate a plan to take any of these squads against any of the NFC “others” if they are laying less than a field goal. Why exactly is Dallas giving only two? And why on earth has the line moved toward Minnesota? When it opened, the spread was Dallas -2.5 in some spots. The Vikings are at home and coming off a bye, but the Cowboys are also coming off their bye. No advantage gained, if there was any to be had to begin with.

Frankly, the Vikings are the perfect 3-3 team. They are 3-3 both straight-up and ATS. They have played three at home and three on the road. And they have lost to the three best teams they played and beat the three worst teams (with quibbling allowed between Seattle and Cleveland in those categories). Minnesota is the league average. Dallas is much better than that.

Maybe I’ll increase my parameters when taking one of the NFC’s locks. Tampa Bay, in this spot, is giving less than a touchdown in New Orleans. This game is eerily similar to the matchup between Dallas and Minnesota. The road team has been great; the home team, nothing better than average. Yet, the line hardly reflects this difference in team skill level and performance.

Also on BuzzChomp: The Master Plan in Foundation has Revealed Itself

The only reason to have pause with the Saints is that Week 1 game against Green Bay. That one is the outlier. If we toss it out as Week 1 noise, this club is nothing special. On Tampa’s side, it would be nice to see the Bucs win a bit more comfortably in some of these games. TB is actually just 3-4 ATS, the worst of the NFC playoff lock teams. But with another week for the offense to get healthy, this should be a divisional win that enlarges the gulf between the Buccaneers and their NFC South peers.

The Titans are really good right now, especially their running game. While Indianapolis is finding ways to win, I’m not particularly impressed with the quality of their victories. They too have a very good run game going, but Tennessee is the better team and they know how crucial this divisional matchup is.

Also on BuzzChomp: Many Saints of Newark Better as Mini Series

I’m willing to give up a point and ride with the Titans to victory. These teams are not as even as the line would have you believe. Only one scares me as an opponent and that’s Tennessee. If they can slow Mahomes and company to a near halt, then surely the Titans will do enough to stop Wentz and the Colts. Even so, they will certainly score more points. It’s time for Tennessee to separate itself from the pack in the AFC.

Piggybacking on the lack of good wins for the Colts, here I am betting against San Francisco. Is it possible that the 49ers are just not that good this season? They are in flux and on par with Chicago at this juncture. The Bears are getting points at home in a major prove-it game. I’m taking all three and half of these points.

Do what you do best and control the game. Chicago has an excellent run game and kept it going against one of the best run defenses last week. Now in NFL Week 8 they have an opportunity to keep things going and redeem themselves completely. I like the home team and like these points. Chicago wins outright.