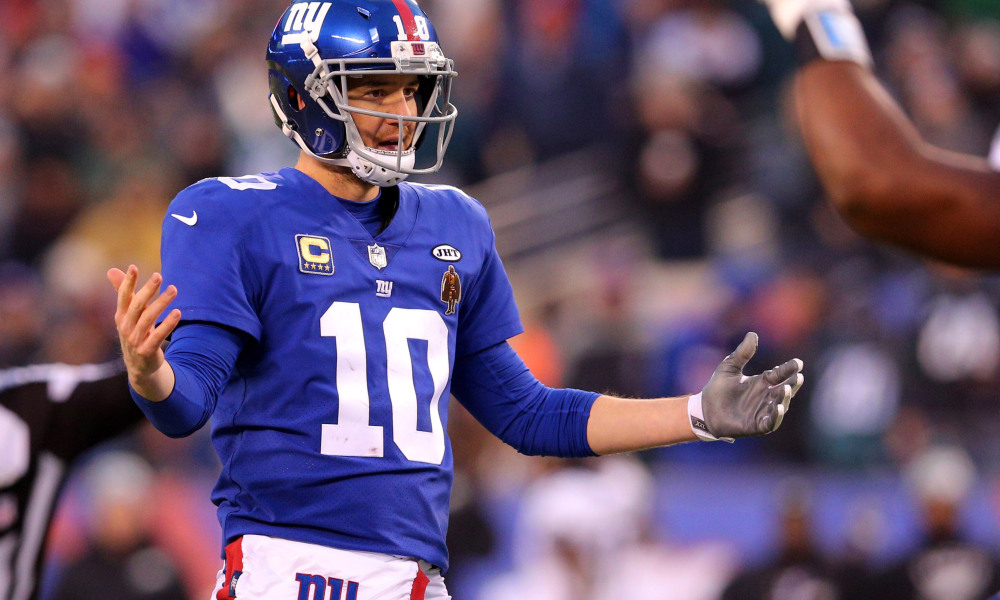 The New York Giants fell to the Philadelphia Eagles on Thursday night of NFL Week 6 by a score of 34-13. Even after a demoralizing loss last week and a terrible season in 2017, this feels like the ultimate low point for this squad.

On Thursday Night Football of NFL Week 6, the New York Giants looked like a one-win team on a short week. They hardly competed with division rival Philadelphia on their way to a 34-13 loss. Even after the crushing 3-13 season the team just went through in 2017, this NFL Week 6 outcome feels like a new low point.

The Giants were the worst team in the NFC a season ago. It wasn’t planned. It wasn’t a special part of some tank. However, as the season went on and losing became the new norm, a one-year reboot didn’t seem like the worst thing in the world. A pick near the top of the NFL Draft could do wonders to add a special talent to a roster that won 11 games in 2016. This seemed to be the shared opinion of the new front office, as evidenced by its selection of running back Saquon Barkley with the second pick in the NFL draft.

ALSO ON BUZZCHOMP: This Traditional Apple Pie a New Favorite

Management that expected a full rebuild would not have taken a running back second overall, regardless of the player’s individual talent. Leadership believed in this team’s ability to rebound back to ’16 levels after a year blip. That single selection brought expectations to this season. A team in full rebuild would have taken a project quarterback or a lynch pin in the trenches. The New York Giants did neither and expected to compete with Eli Manning and a similar roster that just went 3-13.

After six games in 2018, it is evident that this roster cannot compete. Manning is a shell of his former self, missing wide open receivers and dumping down passes at a moment’s notice. The offensive line is still horrendous to boot, which exacerbates Manning’s issues with dealing with pressure. The team is down its tight end weapon, had no pass rush all year with Olivier Vernon sidelined, and is seeing major regression out of its secondary. In other words, it looks like a team that went 3-13 last year and did not plan for a rebuild.

Before Week 6’s game, New York actually still had hope. Sure, it was the worst team in the worst division in the league. But it was just one win out of first place and coming off of what should have been a victory over Carolina in Week 5, if not for two game-changing official errors and a miraculous field goal. After Week 6, it is clear the New York Giants are not anywhere close to the level of Philadelphia, the king of the NFC East, even in the midst of a pretty bad season itself. Instead, New York looks primed for another top five draft selection.

That means the Giants blew the second pick in last year’s draft. Taking Barkley was a huge mistake. And it’s a shame because the kid is spectacular. He was the only New York Giants’ player with a heart beat Thursday night. He was gliding through a solid defense like they were standing still, routinely breaking multiple tackles on every carry or screen pass. There was more than one 50+ yard play with the ball in his hands. Barkley even had a nine-yard carry that involved multiple hurdles of whiffing would-be tacklers that looked like something out of Marcus Allen’s, or as the announcers declared, Barry Sanders’ old playbook.

But even with Barkley putting together a majestic offensive game, the Giants offense as a whole was still borderline unwatchable. And the team is not any good. It needs a different answer at quarterback and has holes up and down all three levels of the defense. After a complete overhaul, the offensive line is still broken too. How could anyone (including myself) have thought this team could rebound immediately from a 3-13 season? A rebuild is coming; it means the entire offseason was a waste that put off the inevitable for an extra year. That is what NFL Week 6’s loss just proved.