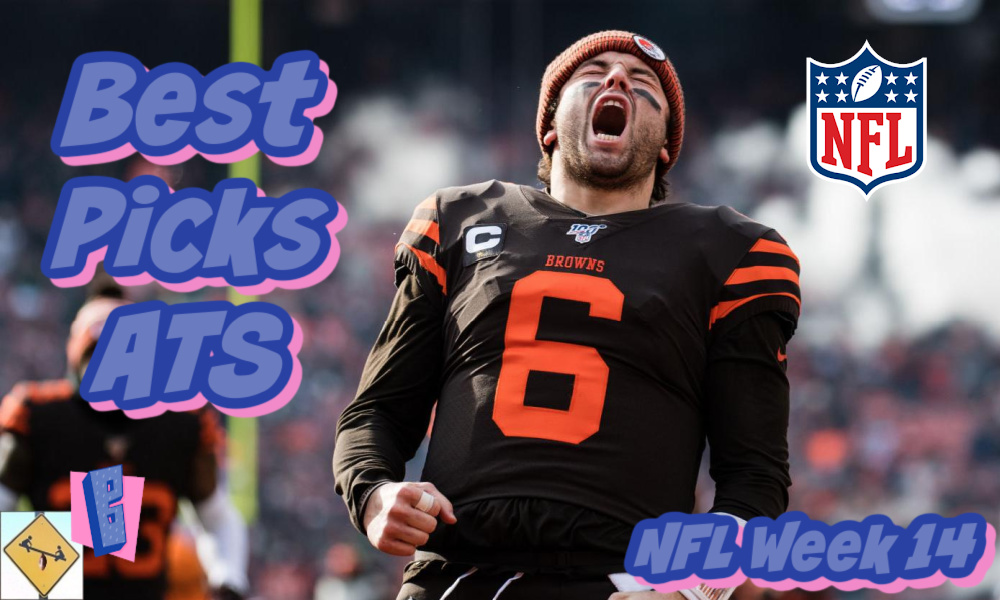 Take the home underdogs this week, unless you’re backing the Saints. Dan and Todd have your NFL Week 14 best picks against the spread (ATS). Four teams worth wagering your house… just don’t bet that much.

There was another Tuesday game in Week 13 which pushed the final weekly outcomes back a day. Regardless, the picture of the league is crystal clear entering NFL Week 14. The Chiefs and Saints seem like respective conference favorites, especially with Drew Brees set to return any game now. Outside of that pair, the hottest teams in football are… the Cleveland Browns and the New York Giants!

Cleveland was the worst team in the sport last decade. And though their crappiness may slip under the radar on a grand scale, the Giants have 36 losses during the past three years. This is good for one of the worst marks of any franchise. Those are the teams on dueling four-game winning streaks that have put each in position for a playoff berth. Cleveland’s -15 point differential (a whopping 100 points worse than Baltimore’s) tells a different story. But it could be too late for the Browns to squander a postseason appearance in a year where the landscape is expanded.

There are an amazing number of home underdogs set to play in NFL Week 14. There could be as many as 11 this week alone! It is a smallish sample size for the year, but such squads are nine games over .500 thus far on the season, so we are picking two of them. These are your Best Picks Against the Spread (ATS) for Week 14 of the NFL 2020 season. All lines come via Odds Shark, which compiles the complete list of Vegas Sports Book betting lines.

One home dog I like is Miami. It seems stupid to bet against KC, but those who have are actually running hot. The Chiefs may be 11-1 straight up, but they are just 6-6 ATS and have failed to cover four consecutive games. Those four straight have come against a variety of defensive units, but Miami is arguably the best of the group. The Dolphins are second in the NFL in points allowed and are one of the few teams that has forced more turnovers than Kansas City. I also liked what I saw from the Miami offense to finish last game.

This past week, San Francisco was favored at home against the playoff-bound Buffalo Bills. Except, they weren’t really at home. The game was played in Arizona. The 49ers lost by double digits. Now, in Week 14, San Fran is again a home favorite without a home stadium against a hot opponent looking to make the playoffs.

Washington is only on the cusp of the playoffs because of the status of the NFC East, and yet the Football Team is playing well right now. WFT will be fourth in the NFL in yards allowed after Baltimore plays Tuesday night. It is also top 10 in points allowed. Plus, it is getting more than a field goal at a neutral site.

There are two or three dominant teams in the NFL this season and New Orleans is one of them. Perhaps the Eagles play a nice game with their rookie quarterback under center, or perhaps they continue to flounder behind a terrible offensive line and bad defense. Either way, I feel secure in surrendering a touchdown. The Saints are favorites to represent the NFC in the Super Bowl. Philadelphia is favored to secure a top ten draft pick with a losing season full of blowout losses. This is easy math.

Talk about being biased toward last season’s breakout star, because the only reason Baltimore is favored is because Lamar Jackson is supposed to be back at 100% for this game. He’s shown his flaws this season as defenses figured out how to defend his strengths. Furthermore, the Ravens’ defense is not good right now.

Do you know what team has won ugly, while also winning in dominant fashion, shedding a losing stigma and finally proving themselves a playoff contender? It’s the Cleveland Browns, who are getting nearly a field goal at home versus the 2020 Ravens. These are not the 2019 Ravens, so come on man! Take the points and the better team. This will at worst be a one or two point game.