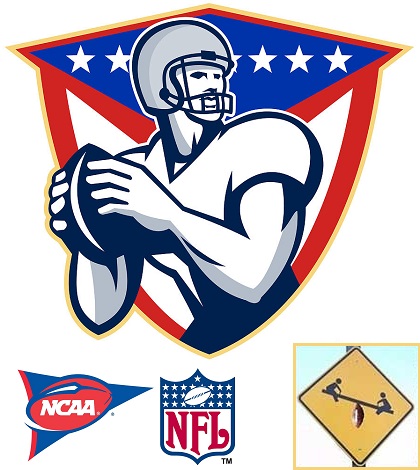 As we talked about last week, the college football season is right around the corner. Big time FBS action kicks off this weekend.

Also on the horizon is the NFL season, due to start at the very beginning of September.

With warmups and preseason games underway, we know injuries are inevitable. However, every year one team or another has their entire season derailed by an injury that takes place before real games even begin.

Last week it was announced that Ohio State had lost its starting quarterback, Braxton Miller, for the season. Not only was Miller a Heisman Trophy candidate, but Ohio State had plans of making the college football playoff this January.

Although talent still remains on the roster, without Miller that plan seems utterly impossible.

In the professional ranks the St. Louis Rams just lost their starting quarterback, Sam Bradford, for the season as well. He re-injured his knee. While the Rams were not expected to battle for the NFC West title, they had hopes of improving this year and fighting for a playoff berth on the back of a formidable defense and veteran-led offense. Now the latter is no more.

There is no way to avoid injuries like these. They happen and will continue to happen whether the games count in the standings or not. But is there a logical way for a team to prepare for life without its starting quarterback?

The QB position is so important that one must be picked and nurtured prior to the season. Teams that have a quarterback controversy are said to have no starting quarterback at all. If they did, there would be no competition for the position.

So if it doesn’t make sense to have two comparable quarterbacks on a roster and it’s near impossible to win without a reliable QB at either level, what are teams to do? Is there any way to plan for a situation like this, or are the future-version Rams and Buckeyes just plain screwed?

It’s devastating to lose any key player on a football team for even a few games, let alone your starting quarterback for the entire season. There is however a key difference between this tragic occurrence in the NFL versus college football.

You asked about a way to ‘plan’ for such a tragedy, or circumvent it all together. Before I debunk that misguided question, let me say that college football actually has an inherent plan built into itself. Unlike the NFL, in college football teams are constantly recruiting the best players year after year after year. Coaches know that the elite guys, a Braxton Miller for example, will only play with their team for two years (more if they’re lucky). The best coaches have already recruited the stars replacement, otherwise that program would drop off the map once the star leaves.

Do Alabama, Ohio State, USC, etc. suddenly become bad teams when their star quarterbacks hit the NFL? No they do not. So the injury issue is somewhat taken care of in college. The system is already a revolving door, helping but not solving this problem. In the case of Miller and Ohio State, it is impossible to replace his unique athleticism. However, Urban Meyer has an excellent quarterback to slot in at the starting position and salvage the season. All is not lost.

Unfortunately for the St. Louis Rams, their season just crashed into a giant iceberg. Unless they can add a proven or semi-proven veteran quarterback, they will struggle to find consistency on offense. I’ve heard Mark Sanchez’s name being thrown around. I really like the guy and he definitely deserves to be coveted instead of made fun of, but he is not going to save your team. He is good, but good only goes so far.

What are NFL and college football teams to do? How do you plan for or bounce back from the loss of your star quarterback? I can only think of one instance in recent memory where a team lost its star quarterback and still had a successful season. That team was the New England Patriots and they lost Tom Brady for a full season.

So the short answer to this tragic question is to hire Bill Belichick or someone comparably talented to shape your program. I do think Urban Meyer is a college equivalent in terms of shaping programs. But Belichick is uniquely amazing, so although he did in fact create a system of winning that was stronger than his hall of fame QB and ultimately lifted the backup Matt Cassel to heights above himself, this is not a solution.

Photo courtesy of www.chatsports.com; QB image via fineartamerica.com; Logos courtesy of the NCAA and the NFL