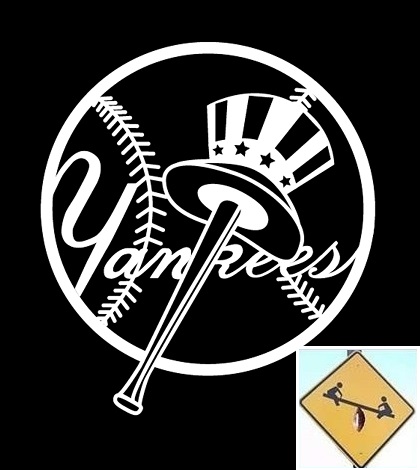 We interrupt this college football kumbaya to bring important, critical, season-defining changes to the New York Yankees. Okay, in actuality, all they did was trade for a middle infielder with a .321 career on-base percentage, but it feels like the tide is shifting. Besides the 25-year old Starlin Castro, who the Yankees just acquired in a trade with the Chicago Cubs, New York now has 25-year old Didi Gregorius and 26-year old Aaron Hicks on its Major League roster. All three players are exceptional defenders who could develop into above average bats. Not to mention the duo of Greg Bird and Aaron Judge residing in the minor leagues. The Yankees lineup is suddenly…young and full of potential?

We are still waiting for the contracts of Mark Teixeira (free agent in 2017), Alex Rodriguez (2018) and Carlos Beltran (2017) to come off the books. That will take two more years. But NY brass didn’t want to wait for the salary sheet to be clean before reworking in some pieces.

With an infield of Chase Headley, Gregorius, Castro, Bird and Brian McCann, the Yankees are set up for the long haul both offensively and defensively. An outfield around Hicks (assuming he builds on last year at the plate), Judge and whatever is left of Jacoby Ellsbury isn’t too shabby either. This hypothetical lineup is still, as I said, two years away, but it’s fun to think about.

The starting staff will still have questions about health and depth. CC Sabathia will be off the books around the same time as the old hitters, but there are no clear replacements moving through the system. Luis Severino already made his splash last season, and Adam Warren was just dealt away to acquire Castro.

Of course, as Arizona just proved during the winter meetings, it’s apparently not too hard to grab two All-Star caliber starting pitchers in one offseason if you’re willing to pay for it, both literally and figuratively. How are you feeling about the Yankees’ long-term chances? And do all these moves add up to implications that we will not be competing in full force for the next two years, or at most competing as much as we did in 2015 by just crossing our fingers that guys stay on the field?

I’m a big Starlin Castro fan and love this move by the Yankees. Youth rules baseball, and New York is finally flipping its roster over to compete in the new era. Combining home-grown talent with young players snatched from other ball clubs, the New York Yankees can seriously compete in 2016 and beyond. I’m not just blustering out hot air; the sky is literally the limit for New York.

My instant reaction to the Castro deal was apprehension. Are the Yankees actually dismantling the strongest part of their team from last season, the bullpen? Then I thought about it for five minutes. You may need a strong bullpen to win a championship, but you can’t win a championship simply with a strong bullpen. Just look at the 2015 Yankees. They had an outstanding pen, which certainly helped them win, but it did nothing to alleviate the holes around the infield and in the batting order. Nor did it make the starting pitching any better. Those issues have to come first, and New York is taking this offseason by the reigns, using its strongest assets to get better pieces for a complete team.

It’s not inconceivable that the players you mentioned, namely Bird and Judge, both become everyday stars for the 2016 Yankees. It’s also a blessing to have hall of fame talent still playing, in order to mentor these young Yankees. A-rod was huge in making Bird’s call-up last season so seamless. Sure the contracts weigh down the club a bit, but you can’t put a price on veteran leadership when it comes to young players. Plus, our Yankees can obviously afford to have an expensive bench.

The obvious hole remains in the starting rotation. Sabathia may or may not be returning to the team as a viable asset. But it was huge for the Yankees to stay out of the bidding wars for David Price and Zack Greinke. The Yankees young players are not developed enough to go all-in on 2016, and throwing money at older stars has proven itself over and over to be a poor decision around baseball. I’m sure the Red Sox were happy to keep Price away from their division rival, but honestly, how much longer can he really play? I’d prefer signing a young stud any day over an aging star. Baseball is getting younger, and the Yankees are now too. Score!