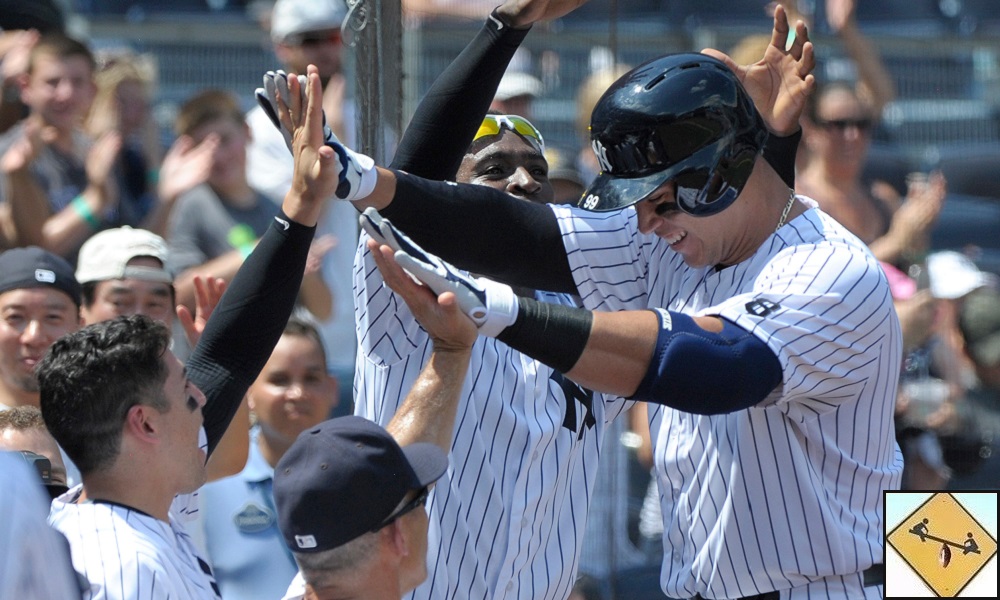 A new era of Yankees baseball has arrived, but are these Baby Bombers the greatest New York Yankees team ever? The playoffs are a real possibility this season and we haven’t even seen their best stuff.

The New York Yankees went through a long overdue rebuild at the trade deadline and then whatever the hell happened with Alex Rodriguez this past week. On the other side, they have come out with a lineup that includes right fielder and Norse god Aaron Judge, first baseman Tyler Austin and catcher/designated hitter/the future/it’s about time Gary Sanchez to go along with the middle core of Didi Gregorius and Starlin Castro.

My question to you; is this lineup made up of Baby Bombers a great lineup or the greatest lineup?

Judge has two home runs in his first two Major League games. Austin had a home run in his first at-bat (which Judge matched one batter later). Sanchez mashed a bomb the day following those back-to-back theatrics. And through all this, the Yankees are actually still alive in the American League playoff chase.

Losing to the Rays on Sunday afternoon didn’t help, but even still, this team is just a couple of games out of the second wildcard spot in the AL. More importantly, it completely retooled its roster while make the team incredibly fun and unbelievably young at the same time. And these were all guys who were already Yankees. We haven’t even called up a single guy who was acquired in that haul at the trade deadline.

It seemed fitting that this past weekend was all about honoring the 1996 title team because the 2018 title team is raring to go with homegrown prospects and trade acquisitions all compiling into one of the most interesting future lineups in baseball. Oh, and Jacoby Ellsbury and Brett Gardner are still here.

Luis Severino is still atrociously terrible as a starting pitcher, which, if we’re being honest, is a pretty big blow to our 2018 title hopes. However, many scouts and analysts never thought he’d stick as a starter in the long run anyway, and he’s been useful out of the bullpen. Why not create the next unbeatable pen to go along with the greatest lineup? We can figure out the starting rotation later. These are the Bronx Baby Bombers after all!

By the way, Judge Sanchez Powers is definitely a television judge I’ve seen at like two o’clock in the afternoon on the CW. He has to be. It is also our future 3-4-5.

I’ve been preaching it for months and now it’s finally coming to fruition. The current Yankees’ lineup is better than what the team was trotting out prior to the trade deadline. The lineup has more power, more speed, its younger, hungrier and infinitely more fun to watch. Of course its better to watch the future of the franchise dominate as a unit, then see its past greatness struggle to compete. Not to belittle our veteran’s accomplishments, but are young guys our pretty damn incredible.

The Baby Bombers currently sit 6.5 games back in the division and 4.5 games back of the wildcard (as of Monday August 15th). They are three games over .500, which is something our older unit struggled to accomplish. Calling this the greatest team ever is not a real stretch. Our Baby Bombers are playing better than future hall of famers. They are destroying the baseball and making New York’s chances of returning to the postseason seem more and more a possibility this year. That’s right, I said this year. With six weeks of baseball left, the Yankees are in striking distance.

New York plays the three teams ahead of it a whopping 26 times going forward. That’s 26 opportunities to pass the Blue Jays, Red Sox and Orioles in the standings. Their other 19 games are all against losing teams, except for a three game series with the Dodgers in mid September. The Yankees close the season facing Toronto, Boston and Baltimore in that order. We are literally one winning streak away from over taking our division rivals and completely destroying what the entire baseball world thought of the 2016 Yankees.

Gary Sanchez had already exceeded my expectations. Then Aaron Judge decimated what I thought would have been a good opening weekend for the young player. Austin also made a major statement in his debut. If these three guys were the top players in what most pundits claimed was a bad farm system, then oh my goodness. New York now has a great farm system by all accounts, after wheeling and dealing at the deadline. Yet these three players, along with Greg Bird, are the ones making the most immediate impact. The true test will come when our young pitching hits the major leagues. But wow, New York has a powerful lineup. If these Baby Bombers lead our previously written off team to the postseason here in 2016, then yes. They are the greatest lineup ever. And none of them are even officially rookies yet.