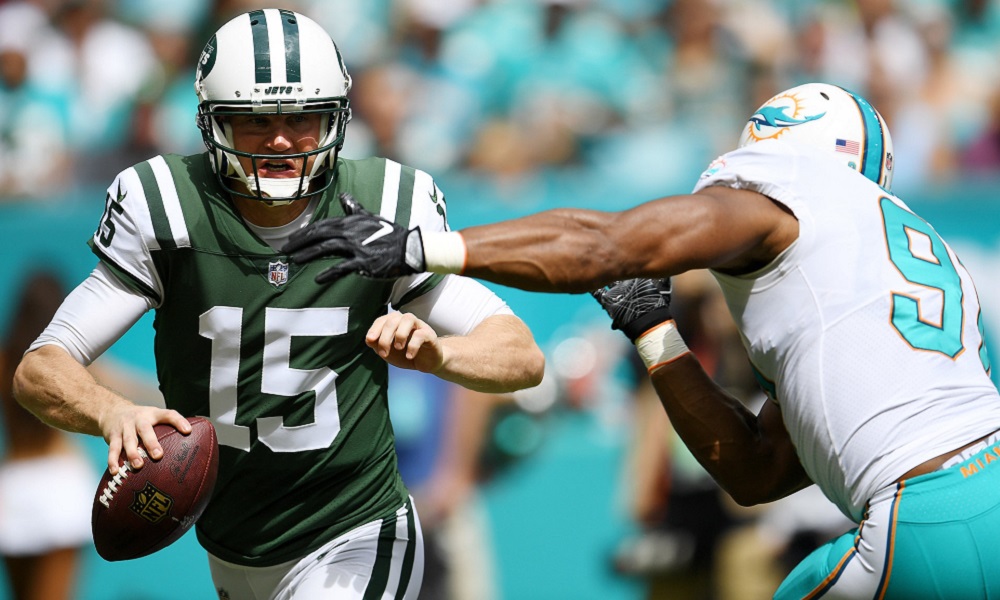 The 2017 NFL season is nearly half over and the New York Jets are exactly what we think. Gang Green is a sloppy team that leads the league in penalty yards per game, yet currently lives in denial.

After seven games and two heartbreaking losses, its obvious that the New York Jets are exactly as advertised. This is a good football team that’s immature and undisciplined. Ironically, coach Todd Bowles preaches discipline and appears anything but sloppy in his own right. Yet the Jets lead the league in penalty yards per game and rank 29th in number of penalties a game. The reason they are last in one category and not the other is simple. Unsportsmanlike conduct penalties for fifteen or more yards have become common place for New York.

Big penalties have been killing the Jets, yet a 3-4 record is about what was expected if you realized pre-season that New York had raw talent. The bigger issue here is sloppy play. Gang Green could easily be 5-2 if they stopped making late hits on players after the whistle blows. Roughing the passer and pass interference penalties are more forgivable, since the referee’s judgment is involved. But unsportsmanlike penalties are inexcusable and New York is consistently committing them.

ALSO ON BUZZCHOMP: Stranger Things S2 Has Something S1 Never Did

One could chalk the sloppy play and unsportsmanlike penalties up to rookie mistakes and the confident fire of players boiling over after the play is dead. I love the fire and energy of the 2017 New York Jets. But I hate watching players run in to make a tackle after the whistle has blown. That is stupid, not intensity. That has been killing this football team.

It’s not just the rookies making mistakes. Josh McCown has made multiple blunders all his own, usually at the worst possible time of the game. Now to be fair, McCown has only started more games in a season than he has for the Jets four times in his fifteen year career. Here is his career stat line via Pro Football Reference. He’s never started a full season, and it’s because he makes mistakes. He is who we think he is, a savvy veteran and great leader who is prone to coming up short. Unfortunately, that is the epitome of the 2017 New York Jets as well. A talented team that is certain to come up short.

ALSO ON BUZZCHOMP: The Deuce Has its Sex Goddess

The Jets are averaging 8.1 penalties a game, up dramatically from 5.8 last season. More alarming is the league leading 78 penalty yards per game, up from only 52.3 last year. New York is only averaging a single interception per game. However, we’ve witnessed how sloppy play is the culprit. The Jets handed the game to Miami in week 7 because of a forced pass that should have been thrown out of bounds. New York is averaging two fumbles per game as well, an even worse stat that defines the sloppy season thus far.

I’m a Todd Bowles fan, but his tenure as Jets head coach will end soon if the team does not clean up its act. I don’t care if New York finishes with a 9-7 record. Leading the league in penalty yards per game is inexcusable, as are the multitude of fumbles and late game missteps. Ultimately the head coach is responsible for his team’s demeanor. I love the fire and intensity, but not at the expense of wins on Sunday.