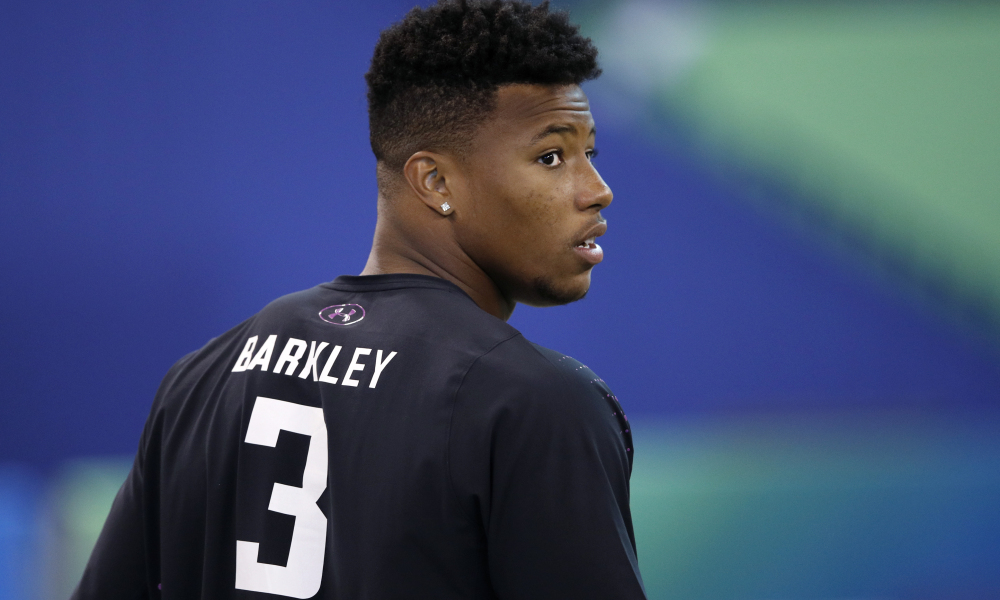 With the second pick in the 2018 NFL Draft, the New York Giants selected Penn State running back Saquon Barkley. The safest player in the draft becomes a roster risk for New York.

The Cleveland Browns made Baker Mayfield the first pick in the 2018 NFL Draft. He was the first former walk-on to be selected first overall. He was probably the first 6-foot quarterback to be taken first as well. And he was certainly, if you ask him, the best player in this draft. That selection made the decision for the New York Giants at number two a very tough one. The franchise was left with a choice between the actual best player in the draft, albeit at a weak position, or the quarterback Big Blue had reportedly coveted all offseason. What to do…

There were other options for New York beyond Saquon Barkley and Sam Darnold. Bradley Chubb and Quenton Nelson each could have been taken second overall without anyone giving it much criticism. But once Mayfield came off the board, this choice was really down to the running back and the quarterback. The Giants took the safer player and, because sports are never so simple, took the bigger risk.

If you had to wager on one player from this draft becoming a legitimate NFL star or Pro Bowl player, Barkley was probably the safest bet. If not him, Nelson would have been the safest target. Barkley has all the skills necessary to excel at running back in today’s league. He had a propensity to dance in the backfield, accumulating negative plays more than one would like, which perhaps bodes terribly for playing behind the Giants’ offensive line. However, Barkley’s talent is safe to back. But his spot is most certainly not.

It is hard to justify taking a running back this high. As I pointed out earlier in the week, it makes very little sense even if Barkley becomes that immediate star. ESPN’s Bill Barnwell dove even deeper prior to Thursday’s first round, digging into the salary cap consequences of taking a RB atop the draft. Star Barkley would be paid fairly, meaning the Giants glean essentially no value out of the draft pick. And that’s if he becomes one of the best backs in football. If he doesn’t, things are much, much worse. As Barnwell describes, since the main goal of the draft should be finding value with cheap contracts for players who excel, it is only logical to always pass on a running back that high and take the quarterback.

That is all true in a vacuum but, as the classic retort exclaims, they don’t play football in a vacuum! I’m surprised Barnwell didn’t include this in his article, but it seems fairly obvious that the distinction he is making is between Los Angeles Rams’ players Todd Gurley and Jared Goff almost to a tee. Would a team rather have Gurley, the star running back being paid almost as much as star RBs get paid, or Goff, the serviceable passer being paid pennies compared to the best quarterbacks in the sport? Which piece of Los Angeles’ roster is more valuable, the production of Gurley or the cap savings with adequate production from the most important position of Goff? It’s tricky to say the least.

Most casual fans would immediately tag Gurley as the better asset for the Rams. He is the fantasy MVP and reigning Offensive Player of the Year. He also doesn’t make that much money. The issue is that no running backs make much money, regardless of how good they are. Only two guys in the entire league have base salaries over $5 million: Le’Veon Bell on the franchise tag and LeSean McCoy. Compare that to the quarterback position, where 19 players have cap hits of at least $15 million!

There are no perfect routes to take in order to find the best way to construct a roster. There are too many moving parts. But accepting that Goff is at least a league-average player, he is saving the Rams around $10 million off what he would be getting, and that figure could be low. What Los Angeles does with that savings is more important than the savings itself, but Gurley is essentially saving the team nothing but filler, a couple million, if that.

Again, this is not a perfect straight line, but are the Rams better off with Goff plus franchised defensive back LaMarcus Joyner ($11 million) or a “normal” free agent quarterback of the same skill level as Goff and a replacement-level DB? This leading question is obvious but also true. Gurley offers no such help even if he is a better player than Goff in a vacuum.

With the Giants, Saquon Barkley’s early career ceiling is being Gurley. That helps the Giants on the field tremendously yet does them no favors in the front office. This can still work out fine for New York, but management will have just one more thing going against it. For the other NY team that did actually select Darnold, it just needs him to be league-average to reap major roster rewards.