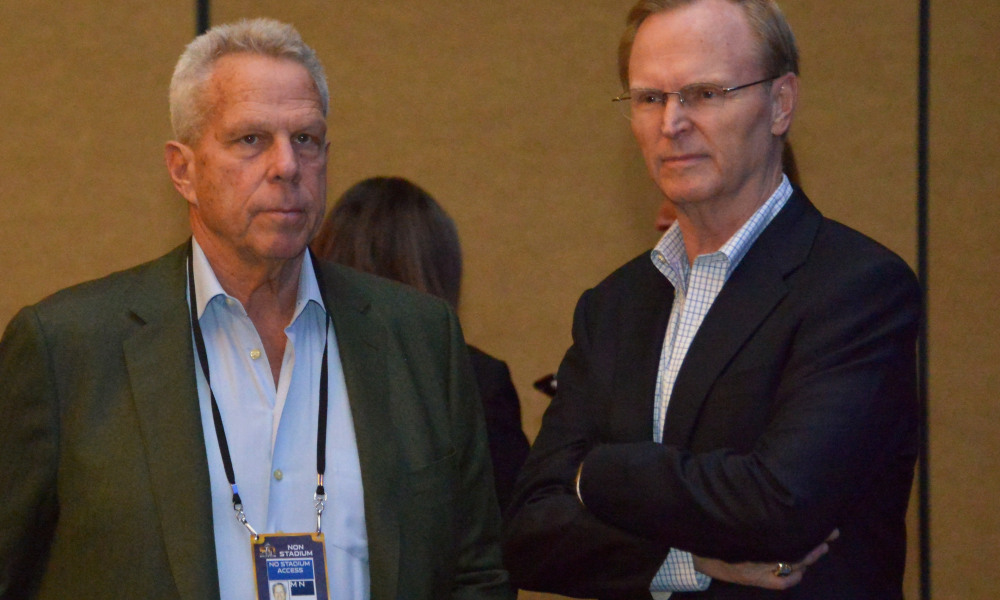 The New York Giants fired their head coach and general manager this past week, but it is ownership that comes out of this process looking bad.

On Monday, the New York Giants announced the firings of head coach Ben McAdoo and general manager Jerry Reese. Despite ownership’s previous declarations that nothing would be determined until after the season, when the figurative tape could be reviewed, these moves were expected and necessary. Even still, throughout this process, John Mara and Steve Tisch have not looked good.

This reactionary and shaky look from the owners started weeks ago. Mara and Tisch said they would review all aspects of the team after the season was over. It was a common refrain from an organization that has always preached patience. Nothing is decided impulsively. However, in the case of 2017, it also seemed stubborn and silly. McAdoo and Reese had failed at their jobs. Having them hang around for six more weeks just to keep up appearances was pointless.

ALSO ON BUZZCHOMP: Avengers Infinity War Looks Too Big to be Inclusive

That patience didn’t last very long, precipitated by the fallout from the benching of quarterback Eli Manning for Week 13’s game against the Oakland Raiders. Even though McAdoo came out of that looking like a moron, so did ownership.

McAdoo stated that he needed to get an evaluation of more of his roster, including backup QB Geno Smith. This was utterly nonsensical, yet Mara backed up those sentiments. McAdoo doubled down on the decision, saying he didn’t regret anything about how the benching of Manning was handled. Mara disputed this but never disagreed with the outcome of Smith replacing Manning in the lineup.

Just a few days later, the team leaders tossed the coach and GM to the scrap heap, coinciding with an announcement of placing Manning back in the lineup as starting quarterback. There couldn’t be a more clear declaration of backtracking, regret, and throwing fired people under the bus.

If ownership was so against benching Manning, why did it okay the move in the first place? Mara and Tisch are obviously just covering their tracks here after the very public and seemingly endless evisceration of the move by the fans and media. Benching Manning was ridiculous, right? Funny story, so we totally want Manning back for 2018. In fact, he’ll be back in the lineup for Week 14 of this season. The guy in charge of that debacle has been promptly fired. We’re all friends again. Nothing to see here.

If this wasn’t simply a reactionary decision to risking losing Manning and the fan base, ownership would have vetoed the move prior to the Oakland game. In terms of the cold, calculated future of the franchise, reinserting Manning actually makes less sense now.

The Giants are playing for an ’18 draft pick and to see what they have in Davis Webb. McAdoo’s existence threatened both those things, as he was supposedly coaching for his job (though he was bad at it). With McAdoo gone, the team is best served playing Webb as much as possible, and losing as many games as it can down the stretch. Step one will likely lead to step two without having to do anything else. Rookie quarterbacks who didn’t garner starting consideration in the preseason don’t normally excel when thrust into the lineup.

We will see how Webb deals with pressure, how he reads defenses, how his throws to the boundary are, etc. We won’t win enough to push NY out of draft position though. Those are two key facets of getting the most out of this final month. Reinserting Manning into the lineup lets us see nothing from Webb and makes the team more likely to win worthless games in December.

It’s odd that Mara and Tisch look so out of sorts and without a plan. They are always measured and patient, in charge of one of the best run organizations in the NFL. That has all fallen to mush in ’17. Everyone needs a fresh start at this point.