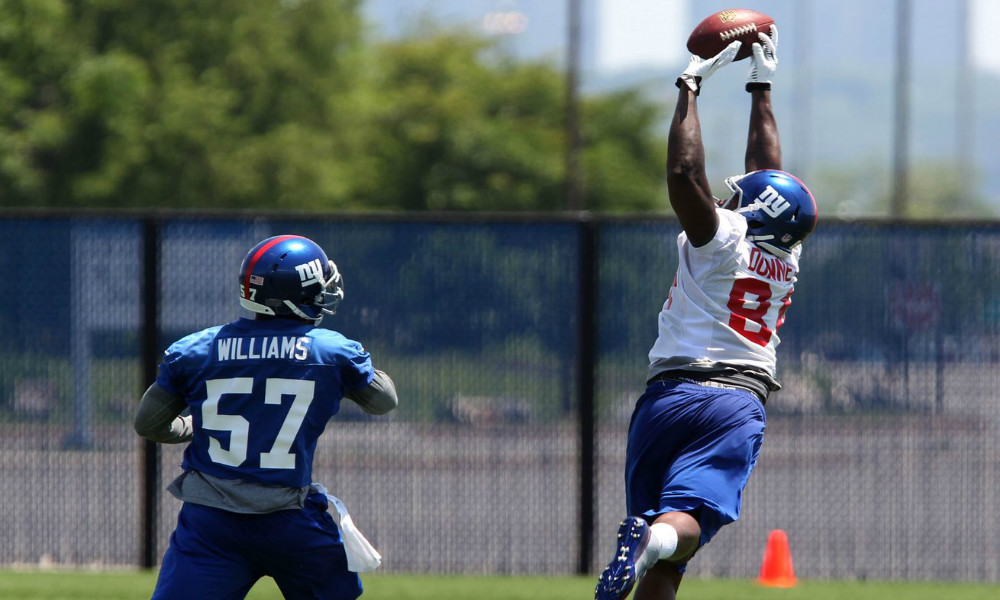 This is the fourth installment handicapping the biggest roster battles on the New York Giants roster. At tight end, the team has upwards of five options to garner legitimate playing time this season and no one who stands above the crowd. (Photo Credit: bigblueview.com)

The New York Giants are a roster filled with big-money starters and oodles of position battles elsewhere. For a team coming off of some less-than-stellar seasons, this makes logical sense in terms of roster building. Management wants to find pieces to compete and win starting jobs, proving they are up to the task of playing each Sunday in real games. We have already moved our way through a number of these position battles, with running back being the latest installment. Now comes another skill position on the offense: tight end.

Tight end has been a cause for concern for New York for some time now. The team used to have playmakers at the position dating back to the days of Jeremy Shockey. Since then, it has been a turnstile of movable parts and missing pieces. This year, the team will attempt to fill the hole with a number of options, ranging from athletic veterans to blockers to rookies. The group in line for starts is five deep: Larry Donnell, Will Tye, Jerell Adams, Matt LaCosse and Ryan Malleck.

Larry Donnell enters this summer as the most experienced player of the group, but that may actually play against him. The Giants and fans all know what he can and can’t do. Donnell is prone to drops despite his main strength being as a threat in the passing game. He is also coming off of a major injury that caused him to miss half the season last year. Furthermore, nearly all of Donnell’s success came in parts of one season, 2014. Is he a one-hit wonder who can’t play a full allotment of offensive snaps? Is he an athlete and nothing more, or is he the future of the tight end position for New York? It seems less and less likely that last point will prove true.

Which opens the door for the other tight ends. Will Tye filled in admirably for Donnell during the second half of last season. It was his first ever NFL action, but we don’t know whether 2015 was the start of a breakout, Tye’s ceiling as a contributor, or even worse, just a fluke. None the less, if Donnell isn’t healthy or doesn’t appear to be back to his old self, this seems like Tye’s job to lose.

The other three options for New York all have even less experience than Tye at the pro level. Adams and Malleck are rookies, a sixth-round pick and an undrafted free agent respectively. LaCosse was undrafted as well, back in 2015, and has just three career catches. But each has promise and, at least with Adams and LaCosse, the organization seems very high on them. Malleck is a long shot. The same may be said of the other two as well, however, since each has issues surrounding his game. Adams is having trouble with drops and may need to earn a roster spot before preseason or he’ll be out of luck. LaCosse is the type of blocker and pass-catcher that works well, but he has injury issues that have crept up again.

It is unlikely New York keeps more than four of these guys on the active roster. That number may even be three. And there is the twist of Will Johnson. Johnson is a fullback who came over from Pittsburgh this offseason. If the team sees him as more of a tight end because of the lack of usefulness of the fullback position, that is a sixth man thrown into this grouping and, because of his skill set and pedigree, another spot gone. Johnson is going to make this team, perhaps over someone like Donnell.