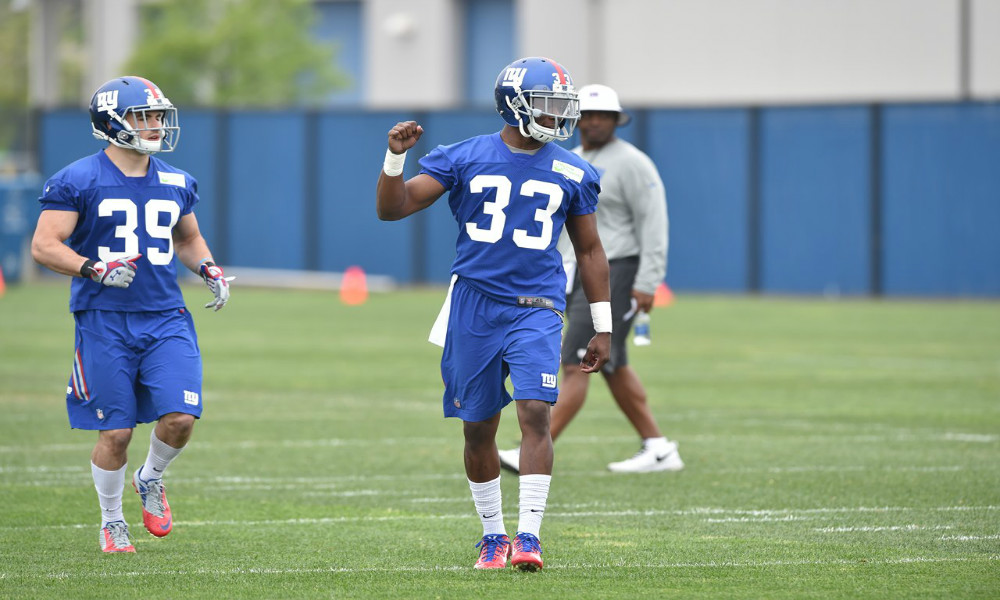 The New York Giants have a crew of interesting players ready to compete at the safety position. Can the team find a starter in the bunch to pair with Landon Collins or will injuries and inexperience cripple the group yet again? (Photo Credits: giants.com)

This offseason was a busy one for the New York Giants. The team spent a lot of money in free agency and added some intriguing pieces in the NFL Draft. But those moves didn’t preclude New York from still having a number of roster questions heading into the summer months and training camp. Two of the main issues on the defensive side of the ball for the Giants in 2016 will be at linebacker and at safety. The problem isn’t a lack of options at either spot; instead it may be too many options of similar skill levels. We already covered what the deal is with the linebacker corps. Now it’s time to address safety, specifically free safety, and handicap who could be used there.

New York traded up in the second round of the 2015 draft to select Alabama safety Landon Collins. Collins had an okay rookie season, leading the team in tackles, but because of the injuries and lack of talent across the depth chart at safety, he was forced to play out of position. Collins is a box safety that can tackle well, can rush the passer and can affect plays near the line of scrimmage. He is not great in coverage, nor should he be asked to run vertically with slot receivers or athletic tight ends. Collins is a strong safety, not a free safety.

Collins is not an answer if he is forced to play deep and cover half the field. But if he is allowed to play how he is most comfortable, that shores up one half of the Giants’ safety corps right there. Though just entering his second year, Collins is far and away the best and even most experienced safety option the team has. Which says something about the rest of this crew.

Assuming no cornerbacks slide over and switch to safety, and assuming no other additions are made (such as the return of Antrel Rolle), the Giants are left with this bunch in hopes of finding a starting free safety: Cooper Taylor, Mykkele Thompson, Darian Thompson, Bennett Jackson and Nat Berhe.

Cooper Taylor has the inside track at the starting job simply because he is the only player of the bunch with any experience in the last 12 months. Mykkele Thompson was a rookie fifth-round pick last season but missed the entire year because of a torn achilles. Darian Thompson was a third-round pick this year and has yet to see the field obviously. Berhe was taken in 2014 but had an injury issue of his own (a blood clot in his leg) that caused him to miss all of 2015. He played on special teams in all 16 games of ’14. Jackson was also a 2014 pick in line to see playing time as he transitioned from corner to safety, but he tore up his knee in both ’14 and ’15 and has yet to see the field in a regular-season game. That leaves Taylor as the veteran of the group. He had 11 total tackles last year and missed all of the season prior with a foot injury. It’s a rough bunch New York will be counting on.

The Giants don’t need all of them to return to perfect health and whatever pie-in-the-sky expectations the team had of them when they were drafted. Really, NY would probably be happy if one or two came through as reliable pieces immediately. The two Thompsons are the favorites to have the biggest impact. Obviously the team loves Darian, having used a third-round pick on him this year. But everyone within the organization was also very high on Mykkele a year ago, and that should still be the case if he can get back to 100 percent.

Berhe may possess the intelligence and personality to play as the deepest man on the defense, but he lacks the range and speed a team would want out of the position. Jackson has those skills, having played corner in college, but he is two knee injuries deep and has no experience. Taylor really seems like a backup at this point of his career, suited more for fill-in duty if more injuries hit this unit.

Forcing a slew of risk-reward guys to compete for a job is perfectly fine. It probably could have worked last year if everyone didn’t get hurt. Let’s hope it works this year since New York really has no alternative at this point.