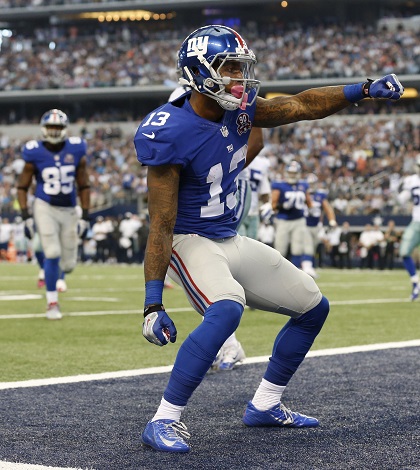 To say the least, the New York Giants’ 2014 season was not one for good memory. It ended with a lackluster 6-10 record, as well as glaring holes at many key offensive and defensive positions. It was evident when the season mercifully ended that if the New York Giants’ 2015 season was going to be more successful, there would need to be many moves made in order to compete for a championship, let alone a spot in the playoffs.

One of the Giants’ biggest issues in 2014 was the team’s inability to generate points in new offensive coordinator Ben McAdoo’s system. The second half of the season proved more promising, as it looked like the offense was beginning to mesh. In the final six games of the season, the Giants averaged just shy of 30 points per game. Thanks to Eli Manning and rookie Odell Beckham Jr., the offense was back to its usual ways. Yet the defense seemed staggered for most of the season. Consequently, this off-season has seen the Giants focus strongly on the defense side of the ball, in an effort to fix last year’s issues and to better work under not-so-new defensive coordinator Steve Spagnuolo.

New York lost staples in their defensive secondary, both Antrel Rolle and Stevie Brown, opening up key defensive positions that needed to be filled this offseason. New York addressed some of those needs through the draft, by using their second and fifth round selections on safeties Landon Collins and Mykkele Thompson respectively. Moreover, uncertainty on the defensive line, based on health and contractual situations, led the Giants to use their third round selection on defensive end Owamagbe Odighizuwa.

The Giants also added some pieces to the defensive side of the ball via free agency, players who should have an instant impact. JT Thomas comes to the Giants after spending the past two seasons in Jacksonville, where he missed just one game and crushed it in 2014 with 51 tackles and 2 interceptions. Josh Gordy, another addition, will be looking to do some damage in New York’s improved secondary this upcoming season, after enjoying a solid year in Indianapolis where he played in all 16 games.

Despite the defensive needs, the Giants’ biggest move of the off-season was without a doubt their draft selection of Ereck Flowers out of the University of Miami (Florida). This marked only the second time in the past 15 years that the Giants have selected an offensive lineman with their first round draft pick. Flowers has great size, measuring in at 6’6” and 330 lbs. While his strengths lie in run blocking, he needs to work heavily on his pass protection. The Giants used 58% of their offensive snaps on passing plays in the 2014 season, so Flowers will without a doubt be working hard all off-season on his footwork and hand placement in pass protection.

When originally drafted, Flowers looked like he would be able to take some time to adjust to his new role in the NFL. That timeline was sped up when perennial starter, Will Beatty, went down with a torn pectoral muscle that will keep him out for the entire 2015 season. Even though Beatty may not be an elite pass blocker, he has been a huge part of the Giants’ frontline over the past five seasons, having only missed six total games in that span. Beatty’s injury surely catapults Flowers into the New York spotlight as the first round pick who needs to step up immediately.

New York’s offensive line has had its fair share of criticism in recent years, and the team spent this off-season addressing some of those issues. One of the biggest issues has been the injury bug, so New York took time to add depth. Newly acquired Marshall Newhouse, in particular, will be asked to step in and step up, bringing his grit and good health exhibited over five NFL seasons to the Giants’ O-line. NewHouse is certainly not an every-down player anymore, but he could be in line for a big uptick in snaps this season, compared to his playing time with Cincinnati and Green Bay.

While the Giants’ MVP of last season was clearly rookie Odell Beckham Jr., the team felt it needed to further solidify the wide receiver position by providing Manning with some additional targets. Some may argue that the Giants overpaid wide receiver and return man Dwayne Harris, but with Victor Cruz returning from ACL surgery, and Rueben Randle a constant question mark, the Giants took a swing on an excellent route runner as their fourth receiver for Manning. New York will most likely use Harris as a slot receiver who can run crisp routes, as well as their primary return man.

Despite the large contract awarded to Harris, the Giants’ most notable offseason acquisition is recent Super Bowl winner Shane Vereen. Coming off a championship and his second straight season with more receiving yards than rushing yards, Vereen looks to become a serious threat out of the Giants’ backfield. While backs Rashad Jennings and Andre Williams have shown some talent for the Giants, the acquisition of Vereen shows that New York is looking to him as an established veteran to lead this group of backs. Vereen’s ability to not only catch the ball out of the backfield, but also provide pass protection, could see him garner the majority of snaps at halfback in 2015.

Individual game tickets are now on sale and fans can expect to see new faces sporting the New York Football Giants’ blue and white in 2015. The usual marquee names such as Eli Manning, Jason Pierre Paul, Odell Beckham Jr., and Victor Cruz will all be back this season, but the team will really be counting on their new additions to step up and make a difference on a New York team that is yearning for better play after last season’s showing.