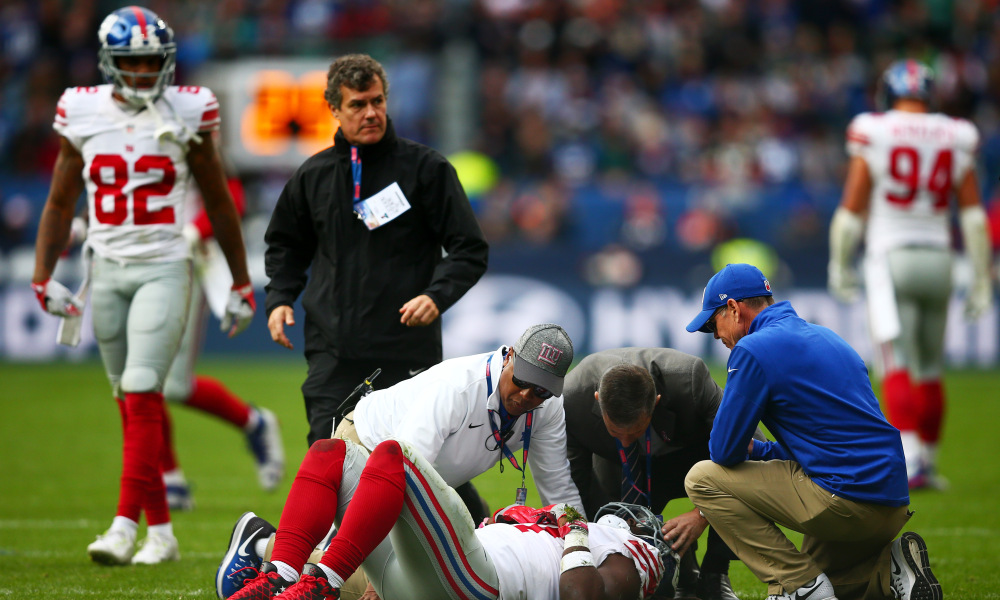 The New York Giants are hurt. They’re always hurt and no one knows why. For years now they have been the most injured team in the NFL, and that trend doesn’t seem to have an end in sight.

It isn’t New York Giants fans’ imaginations. This team is always hurt, banged up and injured, and no one knows why. Not even the team knows why all these injuries keep happening. If it did, don’t you think something would change?

At first, we thought a change in leadership would somehow help the epidemic. Maybe former head coach Tom Coughlin was doing something in practice to overexert his players, leading to pain. Maybe the training staff wasn’t good enough. But with Ben McAdoo now installed as head man, the problem has not gone away. It is just as bad as ever.

Three years ago, New York lost the most man-games in the NFL.

Two years ago, New York lost the most man-games in the NFL.

Last year, New York lost the most man-games in the NFL.

ALSO ON BUZZCHOMP: ESPN Losing Subscribers Fast Than… Everyone

According to Football Outsiders’ adjusted games lost, those three seasons for New York not only led the league each time; they were also the three highest AGL totals in the history of the database (created in 2000).

This year has hardly been an improvement. The Giants have been without a healthy secondary since the very first month of the season. Multiple starting safety options have been down and continue to be out, as have cornerbacks. The team’s best running back, Shane Vereen, is on injured reserve. As are the two fullbacks on the roster, a possible starting tight end and starting linebacker. The team’s starting right tackle has been out for weeks.

At what point do the football and injury gods stop laughing at us? Injuries are supposed to be luck-based, meaning, at some point the bad luck dries up, just as good injury luck would dry up. Instead it remains, and no one knows the answer. Checking back with Football Outsiders, you can see the great disparity between where teams rank in AGL year to year…except for New York that is. The best team in 2015 ranked 16th in 2014. Number two was 25th a year prior. Number 30 was seventh-best one year earlier. The 19th team came from fourth. There is no rhyme or reason outside of New York.

Perhaps this year’s team wouldn’t be good enough to compete for the playoffs even with a healthy roster, but the Giants are 4-3 and technically in second place in the NFC East. Based on record, even the injury riddled team the Giants trot out is good enough. So just imagine where it would be at full strength, or where it would have been any of the past few years at full strength.

Every team in the NFL deals with dozens of injuries, so no one else cares about this. But for the Giants, it’s getting to the point of a hoax or spoof. How else can one explain something so utterly random that is cursing one franchise so consistently for so long?