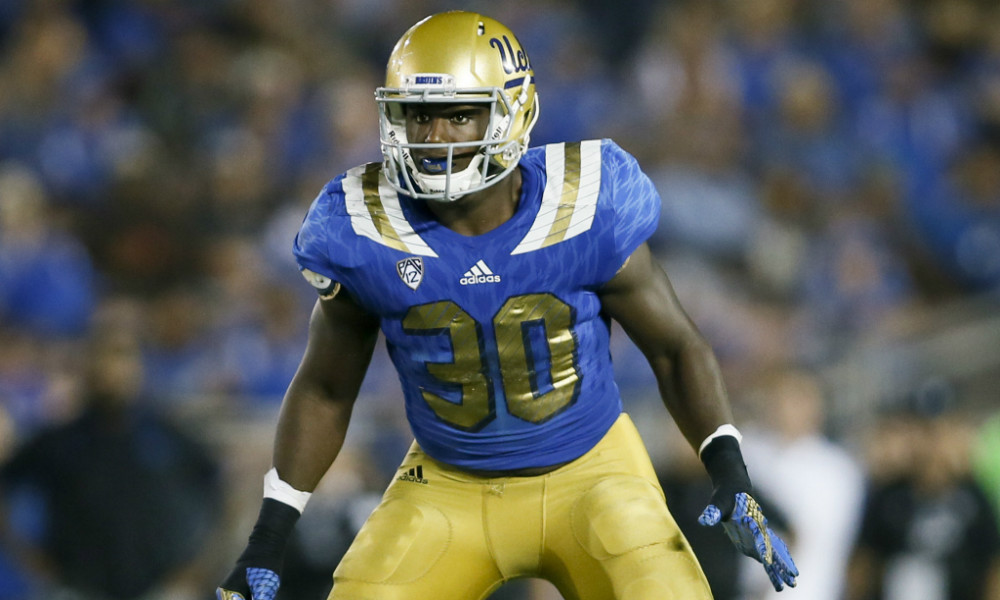 The New York Giants will be on the clock for the 2016 NFL Draft soon enough. Continuing with the men in the middle on defense, here are some of the linebackers the team should be targeting when its pick comes up. (Photo Credit: nj.com)

With the NFL Draft just over a week away, we are nearing the end of our New York Giants pre-draft coverage. It began a couple of weeks ago with the juxtaposed approach of highlighting players that the team should avoid selecting with its top pick: the New York Giants’ 2016 NFL Do Not Draft list. From there, we moved into players the team should actually want to take, starting with defensive pass rushers and then offensive tackles.

We now want to focus on the center of the Giant defense, the linebackers. New York has been a stickler for its belief that the linebacker position can be ignored until the price is right, i.e. don’t draft the position high and don’t spend a lot in free agency on it either. This has been a disaster for a number of years now as NY’s attempt at cost-cutting to fill the spot has failed. The team will most likely stick to this method and pass up linebacker at number 10 overall in the 2016 NFL Draft, but that could continue to backfire, especially with the players who could be available.

The linebacker position for this year’s draft starts with UCLA product Myles Jack. Jack is a do-everything backer with a high motor and endless talent. Because of all that, he likely won’t be available at 10 to the Giants. Though his stock was in flux earlier in the offseason because of a knee injury that sidelined him last college season, he appears to be on track to recover and will be no worse for the wear long-term. ESPN and CBS Sports both rank him as the fourth-best prospect in the draft. There exists the possibility that some teams do shy away from him because of the injury last year. If he manages to drop to 10th and the Giants still pass on him because of his position, it would be a real stomach-punch to this fan base.

Leonard Floyd is another “linebacker” who could go somewhere around the top 10 in this draft. Linebacker is in quotes because Floyd is really a pass rusher with a linebacker moniker. I covered his draft stock for the Giants in the pass rusher preview earlier in the month; he is definitely a target for them.

As for prototypical linebackers who could be floating around the 10th spot, Ohio State’s Darron Lee and Alabama’s Reggie Ragland are the guys. Lee is an outside backer who ran very well at the combine. He was originally a safety who added bulk and moved down to linebacker, which bodes well for his NFL athleticism, as well as his ability to drop into coverage. He also is a good tackler and blitzer, which is sometimes a worry for these guys who move from the secondary down into the box.

Lee’s downside stems from that transition though. He is on the thinner side to play linebacker and consistently fight off/through blocks. He also can be over aggressive according to scouts, though that can likely be improved with coaching.

Ragland plays inside linebacker and doesn’t have the pure athleticism that Lee possesses. He is a smart and experienced defender who plays with great strength, aggression and instinct. CBS Sports describes him as having the “dirtiest jersey on the field,” which is, of course, a high compliment. It also says he isn’t quite as good as another former Alabama backer, C.J. Mosley, but falls somewhere between Mosley and Trey DePriest in terms of Crimson Tide LBs in the NFL.

Another linebacker who was originally considered at or near the top of the draft a la these guys was Notre Dame’s Jaylon Smith. Smith was probably considered the best of the entire group before he suffered his own knee injury. His occurred in his final collegiate game, the Irish’s bowl game, and reports indicate that he will miss all of 2016 at a minimum. A few months back, New York surely would have been delighted with the possibility that Smith would be available at 10, even with its stringent policy on not drafting LBs high. Now, no one is even going to consider taking Smith, which is a shame for the young man.

I would love it if the Giants simply consider addressing linebacker at 10th overall. If Jack is there, or even Lee, it will be worth the time to think about making that pick. It is frustrating to think a franchise has this hard-and-fast rule against such decisions, but maybe we are making too many assumptions and it simply hasn’t spotted the guy worthy of that pick quite yet.